In 'Promesa,' you don’t colonize the island—you invest in it. 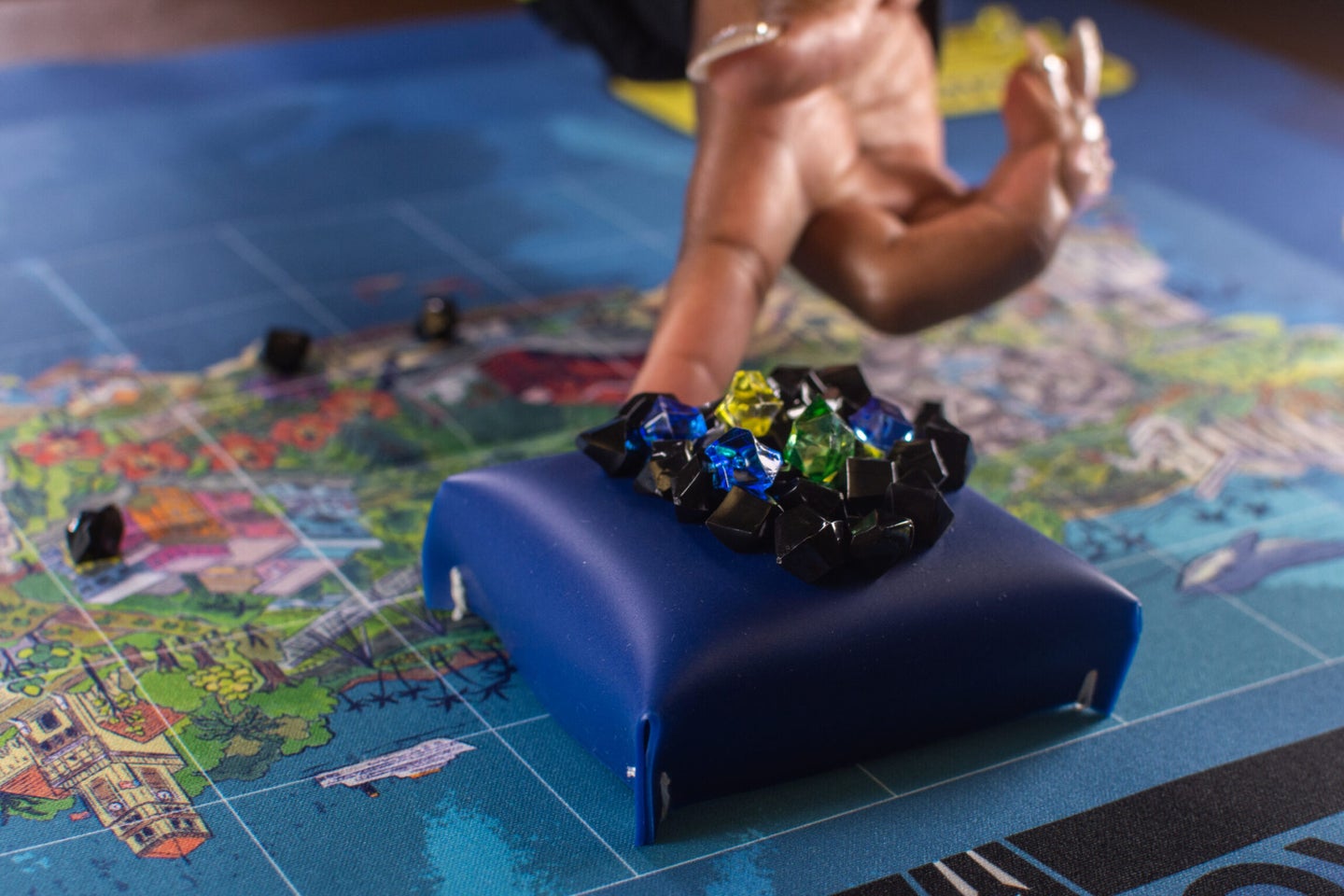 The idea for Promesa was born one afternoon in May 2017 when Mikael Jakobsson and Aziria Rodríguez Arce were playing a round of Puerto Rico, a highly rated, award-winning board game. The premise is that players act as colonial governors and slave owners on the US territory and island, and win points by running plantations, constructing buildings, and shipping goods to Spain. Jakobsson says Puerto Rico came from a 1990’s board game “renaissance” in Europe that popularized themes of exploration, expansion, exploitation, and extermination in the industry.

“It’s playing oppression. It’s like history fan fiction with all these games… You find an island and it’s yours” says Jakobsson, a lecturer at the Massachusetts Institute of Technology and research coordinator at the university’s Game Lab. “It’s a pretty shitty theme for a board game.”

To break the all-too-popular pattern, over the past two years, Jakobsson has been working with Puerto Rican graphic artist Rosa Colón Guerra to create Promesa, a new board game that more accurately reflects the reality of Puerto Rico’s history and people. The game is based on the real-life PROMESA act, which was established by the US government in 2016 in response to the island’s debt crisis, putting American lawmakers in charge of the country’s finances. To win, you must settle Puerto Rico’s bills and build up the country’s infrastructure, education, and social services.

With its unconventional premise and solutions-geared gameplay, Promesa stands out from other options already on the market. For one, it’s set in the present to familiarize players with the challenges Puerto Ricans are facing today. “When a game is set in the distant past, I think it’s to not upset anyone … We don’t have to worry about human suffering,” Jakobsson says. “But we need to see that Puerto Rico is still an actual territory.”

To see exactly how this reframing changes a board-game-playing experience, I played a round of Promesa in late August. I’m no board game expert, but I am competitive—and I wanted to see what Jakobsson’s idea of winning looked like.

The artwork on Promesa is some of the most detailed and vibrant I’ve seen. Colón Guerra, currently a resident at MIT’s Visiting Artists program, traveled all over her home country to capture important local landscapes and ensure that the visuals reflected the people there. Somehow, she squeezed the 3,500-square-mile island down to a roughly 4-foot-square board. Lagoons, castles, and sea animals dot the edges as a waterfall and ruins hold court at the center. A dock, on the southwest corner, is painted like the Puerto Rican flag. If you recognize some of the landmarks, Jakobsson says this is by design: they wanted the depiction of Puerto Rico to feel familiar to those who know the island.

I’m sitting in the Game Lab in Cambridge, Massachusetts, with fellow MIT students, Grace and Iris, for a trial run of Promesa. A pile of crystalline black gems is balanced precariously on a blue “raft’”: These gems represent the country’s debt, while the raft symbolizes the blue tarps that still cover many houses on the island after Hurricane Maria. Our mission is to work together to slowly push the raft off the island without spilling any gems—or else more obstacles will hinder us. Throughout the game, we must invest in education, social services, and infrastructure by adding gems from each of these categories (colored bright green, blue, and yellow) to the pile of debt gems on the raft. This reflects the cost of investing in these areas, and adds to the difficulty of moving the raft. At the same time, paying into education or infrastructure, for example, allows us to take certain actions, like get rid of debt gems or push the raft farther off the island, that help us reach the final goal.

“You three are now the lawmakers in charge of handling Puerto Rico’s debt crisis,” Jakobsson says to open the game. “Congratulations.”

We laugh nervously. “This game seems like it might be hard to win,” Grace says with a slight smile as she tips the gems onto the raft to launch us into more than a hundred years of colonial exploitation and economic burden. A few of the pieces fall off, and we exchange looks as Jakobsson places two red setback gems on the “catastrophe” scale. Once we hit five, disaster strikes. (The nature of the event isn’t specified, but Jakobsson alludes to some of the recent hurricanes and earthquakes that have damaged the island.) After the third catastrophe, the game is immediately over.

“You’ve still got time,” Jakobsson says, when we let out slightly distressed groans. “But not a lot.”

Win and lose together

From the start, Jakobsen says his idea was to show that the island’s debt can’t fully be paid off.

But it took several years of research for him and Arce, an MIT graduate student and consultant on the project, to reflect that nuance in the aims, rules, and construct of a board game. In the summer of 2018, Jakobsson received a grant from the university to travel to Puerto Rico, where they worked with scholars and colleagues to learn what residents were most concerned about, and how those core issues might effectively be designed into a game. After weeks of interviews and analysis, the team settled on the topic of the debt crisis.

Promesa went through many iterations, starting off with a card game structure and then changing formats completely. Eventually, the makers settled on the throughline of getting rid of the country’s debt on a raft, based on the images of the blue tarps they saw after Hurricane Maria. They wanted to send the raft floating, metaphorically, back to Washington, D.C. to “leave the debt where it belonged.” With that part established, the rest of the game came together more quickly.

Ultimately, the structure of the game differs from any that require players to best others to win. It’s a collaborative, cooperative game—you win and lose together.

“A lot of games are built around mechanics that perpetuate certain ideas of Western progress. It’s like, ‘might makes right.’ It’s not about ethics—it’s about having a powerful army,  corporation, or whatever it is that makes you a winner,” Jakobsson says. “So we try to challenge some of those ideas.”

So why spend so much energy on conveying history through a board game that’s supposed to be fun? Wouldn’t this kind of effort be more meaningful in a book or documentary? Board games are a powerful medium, Jakobsson says, because we can engage with them in personal spaces where it can be hard for other political messages to reach. Even if players don’t become experts on Puerto Rico’s colonial past, portraying a different kind of history is important on its own.

“I think there is something about playing out an issue versus just reading or hearing about it that can grip you a little deeper, and maybe can be a little more memorable,” Jakobsson explains.

He adds that he doesn’t think that Euro-games, with their fixation on conquest, are designed to be intentionally harmful. After all, they can be fun to play. But they still have an impact on players’ views and actions in the real world. Games and other media, Jakobsson says, are cultural artifacts that shape our understanding of the people and places around us. “They are reflections of the society or the culture in which we create them. And culture, to some extent, reflects the games we play. So I think there’s a lot of learning going on in games.

[Related: Two-player games that won’t turn you and your friend into enemies]

At the moment, the team is printing a limited run of Promesa. They’ve faced challenges in production and distribution due to the pandemic and slowed-down supply chains, but in the future, they hope to crowdfund resources to support wider access to the game.

Jakobsson hopes that Promesa can nudge game designers in a different direction of storytelling and cultural engagement. Even though the board game industry is surging, explicitly anti-colonialist games like Promesa are still rare. More games that buck traditional trends of “exploration, expansion, exploitation, and extermination” will lead to more interesting directions, he says.

“The idea that games are just for fun and nothing else—that is already starting to be a little less common among younger players,” Jakobsson points out. Many of his students at MIT look for games that have more complex and mature themes about social issues. In his experience, “there’s nothing outlandish about a board game about a political debt crisis.”

Earlier this summer, Ravensburger, the parent company that owns the original Puerto Rico, announced that they would release another game this fall: Puerto Rico 1897. This new version, which marks the year the country achieved autonomy from Spain, moves away from colonial themes: The goal is now to be the most prosperous farmer on the island. But there is still no acknowledgement of the US takeover in 1898.

It’s the last move: Grace, Iris, and I have one chance to push the raft off the island. We draw our last gems (not red, thankfully), and add them to the perilously high stack. The edges of the silicon blue square resist the neoprene material of the board and, for some reason, my fingers are shaking. I hold my breath while pushing, and it seems to pay off—we successfully get the raft into the deep-blue waters of the Atlantic.

Jakobsson warned us it would be a tough journey, but after several rounds of luck, collaboration, and, notably, delicate pushing, we managed to resolve Puerto Rico’s debt crisis. After celebrating our win, Iris and Grace admit they hadn’t known about the PROMESA Act before playing. Iris says that, during each of her moves, she kept imagining what investing in infrastructure, education, and social services on the island might actually be like.

“Well,” Jakobsson says, “at least we did that.”

Correction (September 10, 2022): Mikael Jakobsson’s last name was misspelled in some references. They have now been corrected.