How I turned myself into a Star Wars action figure

Hasbro is 3D-printing customized versions of characters like Princess Leia, the Mandalorian, and Iron Man. 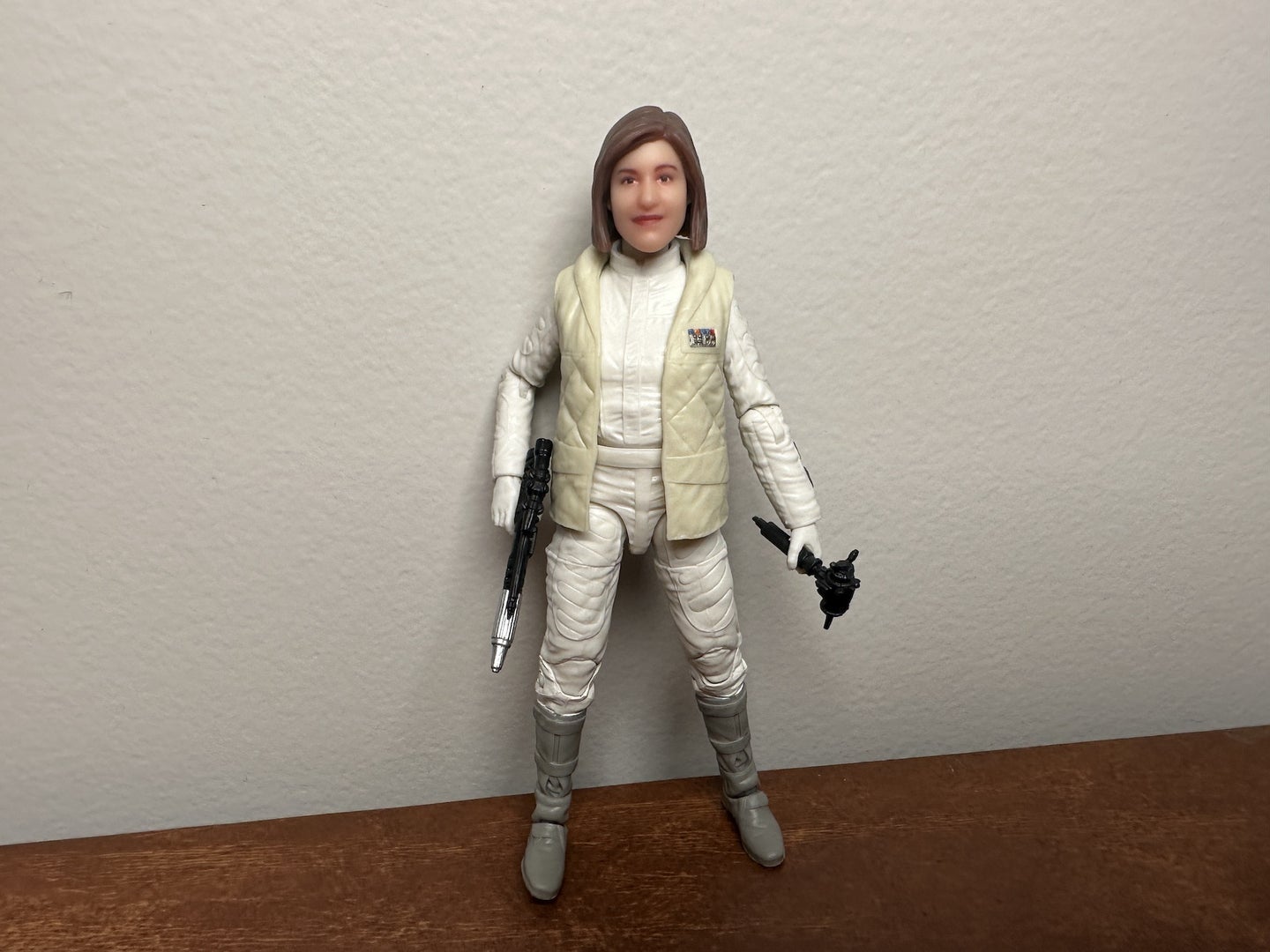 I have a confession: I love action figures way more than a 30-year-old probably should. My fiancé and I collect Star Wars action figures, mainly Hasbro’s 6-inch Black Series line, but I’ve snuck in some of Hasbro’s 3.75-inch Vintage Collection line, as well. We’ve managed to acquire a few hundred, spanning 50 years of the franchise’s history, from “A New Hope” to “Obi-Wan Kenobi.” Among my favorites right now are a Halloween-themed clone trooper that looks like a skeleton and Figrin D’an, an alien member of the galaxy-famous cantina band “The Modal Nodes.”

When we heard a few months back that Hasbro was debuting a new, 6-inch line of toys called the “Selfie Series” that would turn real people into an action figure using a custom, 3D-printed head, we couldn’t wait to see ourselves in miniature. And according to Hasbro president of design and development Brian Chapman, we’re not alone. The demand for a product like that goes back years.

“​​We talk to our fans all the time. And they were telling us a couple of things,” Chapman says. “One is they wanted to be characters in their favorite stories and worlds. And the other thing that they did is they wanted to collect action figures. So we knew that if we could bring that together and make them a character in their favorite stories as an action figure, that would be the ultimate experience.”

It’s one thing to 3D print one or two custom heads for action figures. But it’s a whole other thing to do it at scale. So it took multiple technologies coming of age at once to make the Selfie Series feasible as a mass-market product.

Here’s how getting your face on an action figure actually happens.

The basic tech behind a customized action figure

Hasbro wouldn’t divulge much about the secret sauce that allows their “Face Tech” to capture a person’s likeness, which also allows a user to spin the image around to review it before deciding to purchase the action figure using the Hasbro Pulse mobile app. But the tech is essentially an algorithm that turns the pixels from a face scan into a 3D model.

When you open the Hasbro Pulse app and click on “Selfie Series,” you’re taken to a screen with a line drawing of a head shape into which you align your noggin. When you’re in the right, forward-facing position, a voice tells you to slowly move your head left to look over your shoulder, then back to the center, then right and finally to the center again. After a few seconds of processing, you’ll see a 3D version of your head. (In my case when doing an early test of the service, I had to send Hasbro five well-lit pictures of my face from different angles because the Pulse app’s Selfie Series feature hadn’t yet debuted.)

Hasbro worked with scientists at Formlabs to create a new material based on the company’s Tough 1500 Resin that also allowed for the refinement of colors to be representative of a wide range of skin tones. Over the years, Formlabs has created a number of industrial 3D printers, beginning with the Kickstarter-backed Form 1, as well as unique materials that help companies and agencies such as Google, Marvel, SpaceX, the National Oceanic and Atmospheric Administration and the US Naval Academy prototype and create one-of-a-kind products. The company specializes in stereolithography (SLA) 3D printing, or resin printing, known for its ability to create smooth, highly detailed products.

Their SLA printers are desktop machines that lower a build platform into liquid resin. Rollers squeeze resin into a thin layer on the platform, which is then cured and solidified in selective areas using a laser. The process repeats, layer by layer, until the 3D-printed object remains. Each build plate is then washed with alcohol to clean off excess resin and cured in a system that’s like a microwave.

Each resin-printed object relies upon support structures that are “bed-of-nails-looking things,” according to Formlabs CEO and co-founder Max Lobovsky, from which the final part is broken off. But the force required to tear off those support contacts can affect the part’s function and requires work to clean up. So Formlabs created a technique called Low Force Stereolithography (LFS), to minimize the size and number of those points. LFS allows a user to simply twist the part to break it cleanly from its supports.

“You need something that’s going to have a good surface finish in detail and good color that matches skin tones and what people expect, and then good mechanical properties too,” Lobovsky says.

Those mechanical properties aren’t necessarily standard in 3D printing, as the materials used are often brittle. That’s not ideal for an action figure that has to withstand being thrown around by kids (and adults) of all ages. Their Tough 1500 Resin is fairly sturdy, with an “elongation at break” of 51 percent, which means the material can be stretched by 51 percent before it breaks.

“Once we scan your head, there isn’t a cleanup period,” Hasbro’s Chapman says. “That technology produces a file that we can then print, and the only time that we touch it is to remove the batches from the printers and move them into the assembly of the figures.”

After picking one of five skin tones, you choose one of 14 characters you’d like your head to be placed on from five brands: Star Wars, Marvel Legends, Power Rangers, GI Joe and Ghostbusters. All of the character bodies come from figures Hasbro has already made, like The Mandalorian, Black Panther and the pink Power Ranger. The bodies are made using Hasbro’s standard injection molding process. I went with Princess Leia in her white Hoth snow gear.

You then choose from one of five hair colors and a number of different hair styles. Because each figure body is unique, some hairstyles are only available for figures that can accommodate them.

The hair pieces are printed on their own build plates separate from the heads themselves. They’re attached to the build plate with supports that grow from the back of the head because they’ll be snapped off and replaced with the hair of your choice. But the bald hairstyle came with a particular challenge.

“We went through all this work for hairstyles . . . And then we realized, oh my gosh, there’s a lot of people without hair . . . We didn’t think about that!” Chapman says. “And so we had to completely grow that one head upside down so that when you break it off the fixture, the head is smooth.”

Another challenge arose from the next step: Choosing facial hair, if any. Facial hair, like facial features like eyes and lips, would need to be inkjet printed on the heads using Hasbro’s Photo Real tech, which made a real difference when it comes to making figures that look like the actors portraying the characters. Beards weren’t necessarily going to be available at launch because they added another complication.

“We found after talking with the fans, that it was so critical that you captured their whole self, and that was a big part of it. So we accelerated that and got that in for the launch, which was no easy task,” Chapman says.

Those choices all come together at the end to create a 3D model of the figure you’ll get that you can spin around and zoom in on.

Hasbro has dozens of Formlabs’ Form 3 printers in one place, but heads aren’t printed one at a time. Each build plate consists of 25 total heads that come from people who chose the same skin color, Patrick Marr, Hasbro’s senior director of model development, says.

“We joke about that a little bit in the sense that you submit your order and you get grouped with 24 of your closest friends who you’ll never meet, who have some of the same skin tones that you do,” Marr says. “And so what happens is you go through that process, and the neat thing is you stay with that group all the way through until the final assembly.”

The 3D printing and post-processing of each build plate takes less than a day. After 3D printing and assembling each head and hair piece, the heads are snapped onto bodies already packaged in an open-window cardboard box.

The cost of being an action figure

Each figure is $59.99 plus $9.99 shipping and handling, unless you’re a Hasbro Pulse Premium member, in which case shipping is free. Right now, the estimated delivery date for figures is late December 2022, a few months down the line.

And the figures really look like you. I was impressed by the vibrancy of the colors and the accuracy of the Photo Real printing. There are highlights in my eyes, and even the differences in my eyebrow shapes were captured accurately!

Getting all of the stakeholders at Hasbro and licensing partners to sign on to the ambitious project wasn’t easy. But when a top Lucasfilm creative came by to tour the toy company with his family and was shown the Selfie Series in the model shop, Chapman and the rest of the design team were buoyed by the creative’s feedback.

“He’s doing all the latest special effects, you know, doing all the crazy entertainment. And he was amazed by the Selfie Series. We’re like, ‘I think we have something here,’” Chapman says.

Hasbro will be adding more characters to choose from down the line. And the lessons they learned from the Selfie Series, like bringing production closer to home to eliminate long lead and shipping times and making products in small batches, will inform how Hasbro develops products in the future.

“Personalized, mass-produced products like this, it’s just the beginning,” Chapman says. “There are so many things we can do with this technology, and we can take Selfie far beyond the offering today.”

I can’t wait to put my “Rebel Princess” figure on my shelf among the rest of our collection. There’s really nothing like seeing yourself immortalized in action figure form. After so many years on the hunt, I’ve finally been able to collect a version of myself.