The device beeps as an operative gets closer to the ground, helping them (and anyone jumping in tandem with them) safely execute a landing maneuver. 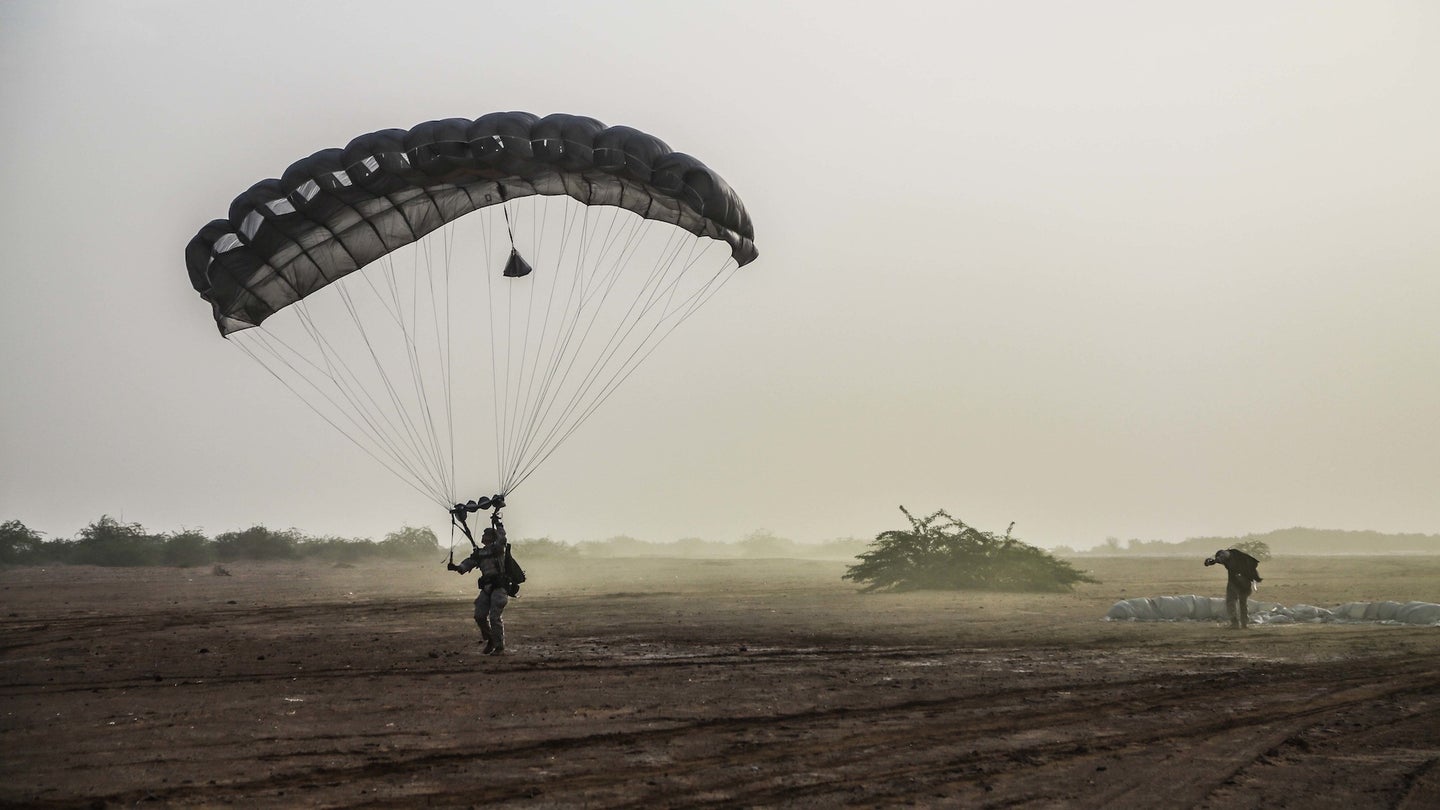 US Marines trained with the French military in 2015 in Djibouti. U.S. Marine Corps photo by Sgt. Steve H. Lopez
SHARE

Jumping out of an aircraft at an altitude of 28,000 feet in the thick of night, while wearing an oxygen mask, and descending into a hostile environment, is no easy task even if you are parachuting alone and are relatively lightweight.

But it’s much more challenging when you do the same mission carrying not just pounds of gear but are jumping in tandem—attached to another person who is not a trained paratrooper. That configuration makes it almost impossible to look down and gauge how far away from the ground you are, so that you cannot only warn your passenger in good time to lift their legs up horizontally but also correctly time your landing maneuver.

That’s the problem addressed by French special forces of the 13th Parachute Dragoon Regiment, known as the 13th RDP, an army regiment entirely dedicated to gathering human intelligence from any theater in peacetime, wartime, or during other crises.

Until recently, the 13th RDP paratroopers were using a ground-detecting system developed over 30 years ago that they found lacking. So, inspired by the reverse sensors that feature on some cars—they are ultrasonic and electromagnetic, with the distance to whatever is behind your vehicle calculated by the time it takes for the waves emitted by the sensors to bounce back to your vehicle—one of the soldiers with hundreds of tandem jumps under his belt had the idea of developing a similar system that would beep at increasingly shorter intervals during his jump the closer he got to the ground.

With some colleagues, he took the concept to France’s Defense Innovation Agency (AID), a specific arm of the French Ministry for the Armed Forces created to discover and develop disruptive technologies. The AID provided him with funding of about $51,000 to work with small French electronics design office Bordelaise Electronique to develop a better system.

The result is DAPCO (Dispositif d’Aide au Poser pour Chuteur Opérationnel), a device that looks like a small box (it’s just 4×4 inches in size) to help operational paratroopers land. DAPCO uses lidar (an acronym for Light Detection and Ranging) technology, which emits a pulsed laser. Given that the speed of light is a known quantity, the time it takes for the light to hit the ground and return to its source will indicate the exact distance from the source (in this case the DAPCO on the paratrooper’s chest) to the ground. This information is also provided by a backlit altimeter on their wrists but the sound signal is more immediately receivable.

Bordelaise Electronique director Nicolas Tauzin says that they had initially investigated two different technologies: radar and lidar. But radar was quickly eliminated as being too easy to detect: A radar beam is wider than a laser beam and radar-detecting instruments are relatively more widespread than laser detecting ones. “Lidar is much more discreet, particularly as the light beam is extremely thin,” Tauzin says. “Overall, given the precision, weight and size criteria we had to meet, lidar was the way to go.”

The operator calibrates DAPCO prior to every jump to take into account the overall weight under the parachute for that particular jump. Its beeps become a continuous sound about 25 feet from the ground, as that is the altitude at which the paratrooper starts his landing maneuver. The system is connected to the paratrooper’s radio, so only he can hear the beeps in his earphones.

In addition, the paratroopers “have a compass and a satellite positioning system to guide us along the designated route because with our operational parachutes we can travel around 45 miles after a HAHO jump.” HAHO, by the way, stands for “High Altitude, High Opening.”

A HAHO jump, known by military paratroopers the world over, is when they exit the aircraft at high altitude wearing an oxygen mask and open the parachute 10 to 15 seconds later. These types of jumps are used notably in covert operations to avoid the missions being compromised by the loud snapping sound made by a parachute when it unfurls. In the United States they are undertaken not only by the Green Berets but also the SEALs, the Delta Force, the Pararescuemen, Combat Controller and Special Operations Weathermen of the U.S. Air Force and the 75th Ranger Regiment, among others.

“We land at speeds of between 50 to 40 ft a second,” says the sergeant major who had the idea for DAPCO. They also employ something called a shock bag, which inflates under the passenger’s backside. Given their lower position in front of the pilot paratrooper, the passenger will land on their bottom, so the shock bag makes the experience more comfortable as long as they’ve got their legs horizontally out in front of them—otherwise they may break a few bones, hence the importance of knowing where the ground is. “Parachuting is not an end in itself. It’s simply a means to get us to the mission zone so it’s important that everyone is in good shape when we hit the ground,” this person adds.

DAPCO has been used in around 70 experimental jumps and has been authorized for operational use by the Special Forces. Thirty of them are ready to be delivered to the army special forces and a further 30 to the air force special forces. The French Army’s testing center, the STAT, is currently working on authorizing it for conventional paratroopers as well.