A better understanding of how concussions happen has led to more innovative helmet designs. 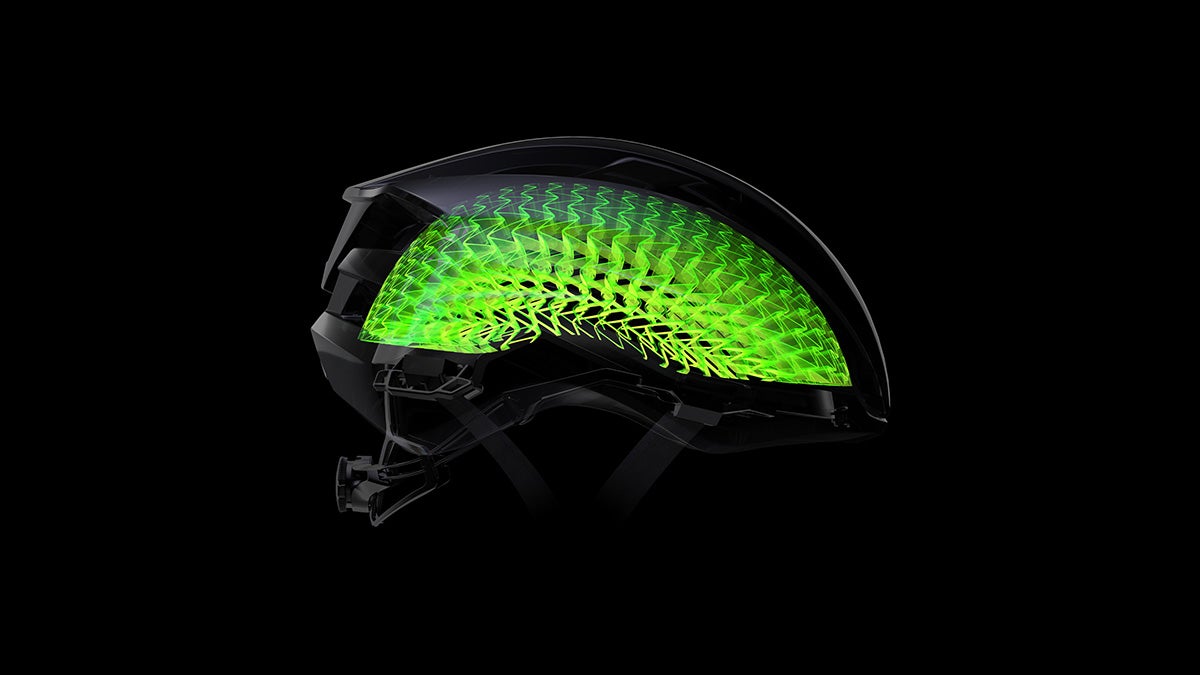 Cycling provides a nearly endless array of gear-related topics to research, like frames, components, and even attire, which may or may not be Lycra-based. Unfortunately, helmets for enthusiast riders haven’t typically provided that same kind of product rabbit hole—you buy it because you don’t want to whack your brain on the street if you take a fall and most lids accomplished that in pretty much the same way.

However over the last few decades researchers have begun to better understand how head injuries—particularly concussions—happen. In tandem, helmet companies have used that new knowledge to innovate, creating models that account for more than just a simple slap against the blacktop during a fall. The latest, is a new set of helmets out from the cycling giant Trek, using a technology they call WaveCel. The key component is a honeycomb-style insert that unlike its competition, absorbs rotational energy, which is largely responsible for dangerous concussions. The new helmets come in four designs which range in price from the cheapest, the Charge WaveCel Commuter Helmet and the Specter WaveCel Road Helmet at $150 to the most expensive, the WaveCel Road Helmet and the Blaze WaveCel MTB Helmet at $300.

Most consumer helmets prevent injury via a lightweight yet rigid insulating foam called Expanded Polystyrene, or EPS. This technology was placed in helmets in the late 1960s and has been a staple ever since. In fact, the foam is similar to what you’d see in a typical styrofoam cooler or packing popcorn, though it’s far higher quality.

If you are riding your bike and crash your head into something rigid, it reduces the amount of energy that would hit your skull by deflecting and redirecting that power away from any one area of your skull. The more you move or change the direction of that incoming energy, the more likely the impact will be as evenly spaced out as possible. When done right, this method does a decent job of preventing cracks to the skull that could be sustained during a fall.

But styrofoam-like helmets are far from perfect. In fact, they are often meant to be used as a sort of “one and done” style tech. In the event of a crash, the outer shell cracks, and the EPS foam takes that crushing blow for you. Further, the foam inside is either incapable of bouncing back, or it’s impossible to tell the extent of its damage. So one protective blow to the head is all your helmet can give you.

In more recent years, researchers have also found that simply distributing energy at the point of impact is not the most ideal way to prevent a concussion. EPS helmets mainly intake energy in a linear direction. But that’s not always how a person falls off a bike. Instead, what’s often the case, is that their head turns and pivots and its this rotational-style concussion that poses the most danger: Inside the brain, cerebrospinal fluid (which is typically the brain’s natural cushioning) shifts and allows your noggin to jostle around unprotected, irritating and potentially damaging the delicate nerves inside.

In 2001, researchers at the Royal Institute of Technology in Sweden created a technology called MIPS, an acronym for multi-directional impact protection system. In simplest terms, the MIPS technology acts as a makeshift layer akin to your body’s natural cerebrospinal fluid. Rather than reducing the impact of direct or linear forces, as the foam helmets do, MIPS works to redirect the impact of rotational forces from angled impacts. MIPS is essentially a thin liner. When placed between it and the helmet’s hard shell, it creates a low friction layer which allows the helmet to slide back and forth just like your body’s natural fluid cushioning.

This turned out to be crucial. Angled impacts, researchers found, can be far more damaging to the brain than direct, linear ones. Trek claims its new bike helmets take that technology one step further. With traditional MIPS (and EPS foam), the helmets reduce the impact by redistributing the incoming energy. That works well at preventing any one area of the skull (and brain) to receive the lion’s share of the impact, but it still places much of the burden of the energy on the head. Instead, Trek sought to create a MIPS-like slip insert that absorbs rotational energy rather than just redistribute it. Their new liner—called WaveCel—does that via a unique honeycomb design that has two phases of rotational energy absorption.

At first the WaveCel insert works much the same way as MIPS. It moves freely, via a low friction surface, within an EPS helmet. But what the Trek team found was that when the falls reach a certain high energy impact, friction starts to build between the insert and the EPS helmet. Eventually, there’s enough resistance that the insert is unable to deflect that rotational energy anymore. Things get jammed, essentially, and too much energy starts to reach the brain. “What we realized is that what’s happening is the load is getting so high that eventually enough friction builds and the layers get stuck,” says Tony White, a research and development engineer at Trek. Once it reaches that point, WaveCel’s new technology prevents that friction from building by absorbing that energy rotationally as it starts to build up.

It does all of this through a pretty nifty physics concept known as shearing. Once that friction starts to build, the materials that make up the WaveCel slip move in parallel but opposite directions. That ensures that friction never builds up. You can think of it like a deck of cards. If all of the cards were stuck together, and you applied enough direct and angled forces against the deck, you would start to build a dent into the deck. But in a typical deck, where no cards are stuck to each other, as you apply force, those cards slide back and forth, without creating friction or dents.

In other words, as energy loads increase, as they do during a bike crash to the head, it gets harder for that slip to stay, well, slippery. But with WaveCel, as the energy load keeps going up, the new tech will keep slipping, compressing, and shearing, so you will continue to see that benefit even for higher levels of energy impacts.

This unique shearing ability rests in the WaveCel’s slip design. Similar to a honeycomb, it has a triangular cross section, instead of straight walls coming down. “That allows it to crush reliably and it also allows it to shear over sideways when a load is applied,” says White.

How WaveCel stacks up

Regardless of how cool the WaveCel tech is, the real question is how well it stacks up against standard EPS foam helmets and MIPS. In a study published in December of last year in the journal, Accident Analysis and Prevention, the authors (some of whom were co-inventors of the WaveCel technology) compared standard EPS helmets (which acted as the control) to WaveCel ones and to ones with MIPS tech under a number of different scenarios including direct linear acceleration, rotational acceleration, and rotational velocity. (All using simulations, of course, meant to mimic real crash scenarios.)

Through its own testing, Trek claims that its new helmets are 48 times more effective than standard EPS foam at preventing concussions from common cycling accidents. Independent research, in which none of the authors are affiliated with any of the technology, has yet to be completed, as does independent, direct comparisons between the MIPS and new WaveCel types.

However, outside testing by Virginia Tech’s Helmet testing group, which is an independent body that produces unbiased consumer rating systems for helmets in a number of different sports, including recreational cycling, tested the helmet’s overall biomechanical performance, which is essentially it’s overall ability to reduce your injury risk.

“We perform these tests in the laboratory setting but it is based on how cyclists will hit their heads in the real world,” says Megan Bland, a graduate student and research assistant at Virginia Tech who helped develop the helmet rating system at Virginia Tech. “We found that this helmet earned five stars in our rating system, which is the highest mark you can get.” Many rating systems, unlike ours, she says, don’t test angled impact, only linear. However its that angled impact that has the potential to cause concussions. In the past few years in particular, we’ve gained a better understanding of what factors contribute to concussions and other brain injuries, says Bland, and similarly, she says, in the lab we’ve learned how to more realistically model and study these impacts. “We now know that rotational forces are a huge factor in producing concussions. So now that we know that we can incorporate that into our testing.”

All this information has come about, Bland says, as the result of about seven years of studies done on athletes, particularly football players, in which they collected head impact data and compared them to injury diagnoses to pinpoint exactly what types of head impacts lead to what head injuries, and most importantly, how various new technological advances, like MIPS and WaveCel helmets, can prevent these injuries best.

As more research comes in, researchers and companies can continue to tweak their technologies to make them even safer. And understanding more about how the brain works can help, too. After all, these new technological advances are really just mimicking—and slightly enhancing—our brain’s own defense mechanisms.