The Amazing Story Of The $300 Glasses That Correct Colorblindness

Mark Changizi and Tim Barber turned research on human vision and blood flow into colorblindness-correcting glasses you can buy on Amazon. Here’s how they did it. 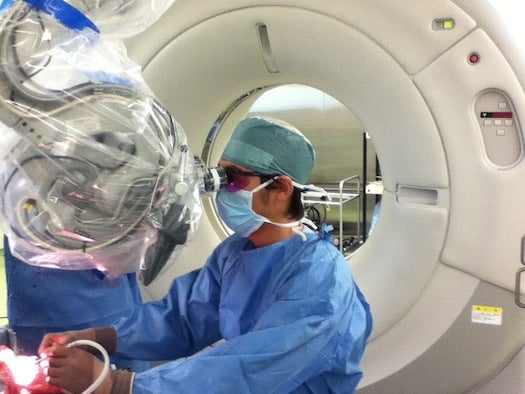 The glasses have several potential applications in the medical field. 2AI Labs
SHARE 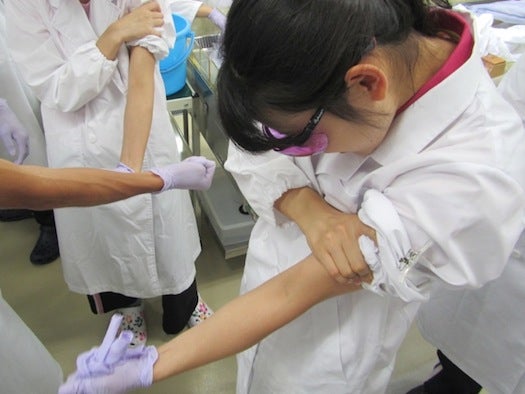 Students experiment with the glasses in anatomy class

Students experiment with the glasses in anatomy class

About 10 years ago, Mark Changizi started to develop research on human vision and how it could see changes in skin color. Like many academics, Changizi, an accomplished neurobiologist, went on to pen a book. The Vision Revolution challenged prevailing theories–no, we don’t see red only to spot berries and fruits amid the vegetation–and detailed the amazing capabilities of why we see the way we do.

If it were up to academia, Changizi’s story might have ended there. “I started out in math and physics, trying to understand the beauty in these fields,” he says, “You are taught, or come to believe, that applying something useful is inherently not interesting.”

Not only did Changizi manage to beat that impulse out of himself, but he and Tim Barber, a friend from middle school, teamed up several years ago to form a joint research institute. 2AI Labs allows the pair to focus on research into cognition and perception in humans and machines, and then to commercialize it. The most recent project? A pair of glasses with filters that just happen to cure colorblindness.

Changizi and Barber didn’t set out to cure colorblindness. Changizi just put forth the idea that humans’ ability to see colors evolved to detect oxygenation and hemoglobin changes in the skin so they could tell if someone was scared, uncomfortable or unhealthy. “We as humans blush and blanche, regardless of overall skin tone,” Barber explains, “We associate color with emotion. People turn purple with anger in every culture.” Once Changizi fully understood the connection between color vision and blood physiology, Changizi determined it would be possible to build filters that aimed to enhance the ability to see those subtle changes by making veins more or less distinct–by sharpening the ability to see the red-green or blue-yellow parts of the spectrum. He and Barber then began the process of patenting their invention.

When they started thinking about commercial applications, Changizi and Barber both admit their minds went straight to television cameras. Changizi was fascinated by the possibilities of infusing an already-enhanced HDTV experience with the capacity to see colors even more clearly.

“We looked into cameras photo receptors and decided that producing a filter for a camera would be too difficult and expensive,” Barber says. The easiest possible approach was not electronic at all, he says. Instead, they worked to develop a lens that adjusts the color signal that hits the human eye and the O2Amp was born.

The patented lens technology simply perfects what the eye does naturally: it read the changes in skin tone brought on by a flush, bruise, or blanch. The filters can be used in a range of products from indoor lighting (especially for hospital trauma centers) to windows, to perhaps eventually face cream. For now, one of the most promising applications is in glasses that correct colorblindness.

As a veteran entrepreneur, founding Clickbank and Keynetics among other ventures, Barber wasn’t interested in chasing the perfect color filter for a demo pair of glasses. “If you look for perfection you could spend a million dollars. And it is just a waste of time,” he says. A bunch of prototypes were created, and rejected. Some were too shiny, others too iridescent. “We finally found something that worked to get the tone spectrum we wanted and to produce a more interesting view of the world.”

What they got was about 90 percent of the way to total color enhancement across three different types of lenses: Oxy-Iso, Hemo-Iso, and Oxy-Amp. While the Amp, which boosts the wearer’s general perception of blood oxygenation under the skin (your own vision, but better), is the centerpiece of the technology, it was the Oxy-Iso, the lens that isolates and enhances the red-green part of the spectrum, that generated some unexpected feedback from users. Changizi says the testers told them that the Oxy-Iso lens appeared to “cure” their colorblindness.

Changizi knew this was a possibility, as the filter concentrates enhancement exactly where red-green colorblind people have a block. Professor Daniel Bor, a red-green colorblind neuroscientist at the University of Sussex tried them and was practically giddy with the results. Changizi published Bor’s testimony on his blog: “When I first put one of them on [the Oxy-Iso,], I got a shiver of excitement at how vibrant and red lips, clothes and other objects around me seemed. I’ve just done a quick 8 plate Ishihara colour blindness test. I scored 0/8 without the specs (so obviously colour blind), but 8/8 with them on (normal colour vision)!”

Despite these early testimonials, the pair thought that the O2Amp glasses would be primarily picked up by hospitals. The Hemo-Iso filter enhances variations along the yellow-blue dimension, which makes it easier for healthcare providers to see veins. “It’s a little scary to think about people drawing blood who can’t see see the veins,” Barber says. EMT workers were enthusiastic users thanks to the Hemo-Iso’s capability of making bruising more visible.

From there, Barber and Changizi embarked on a two-year odyssey to find a manufacturer to make the eyewear that would enable them to sell commercially. Through 2AI Labs, they were able push their discoveries into mainstream applications without having to rely on grants; any funding they earn from their inventions is reinvested. They also forewent some of the traditional development steps. “We bootstrapped the bench testing and we didn’t do any market research,” Barber says.

Plenty of cold calling to potential manufacturers ensued. “As scientists talking to manufacturers, it seemed like we were speaking a different language,” Barber says. Not to mention looking strange as they walked around wearing the purple and green-tinted glasses at trade shows. Changizi says they finally got lucky last year and found a few manufacturers able to produce the specialized specs. All are available on Amazon for just under $300.

Changizi and Barber aren’t done yet. In addition to overseeing sales reps who are trying to get the glasses into the hands of more buyers, the two are in talks with companies such as Oakley and Ray-Ban to put the technology into sunglasses. Imagine, says Changizi, if you could more easily see if you are getting a sunburn at the beach despite the glare. They’re testing a mirrored O2Amp lens specially for poker players (think: all the better to see the flush of a bluffer). Changizi says they are also working with cosmetics companies to embed the technology in creams that would enhance the skin’s vasculature. Move over Hope in a Jar. Barber says it’s not clear how profitable any of this will be yet: “We just want the technology to be used.”