Wearable Computer-Socks Guaranteed To Be The Smelliest Computers You Own 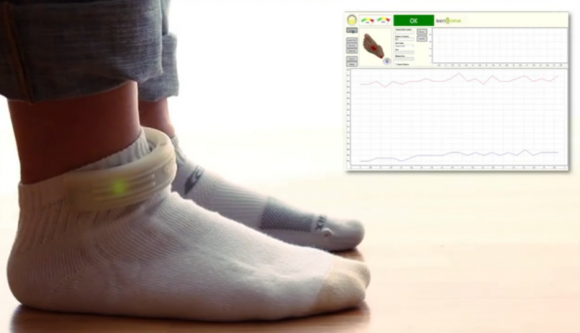 Fitness trackers are, slowly but surely, getting better. First there was the Fitbit (I mean, the Fitbit is still wildly popular, but it is the most basic type of tracker): a small pedometer with an app. Then there was the Basis Band, which added in real-world goals and more advanced sensors like a heart rate monitor and perspiration sensor. And soon, it seems, runners will have wearable computer-socks, called Sensoria, that may just be the most impressive tracker we’ve seen yet.

Sensoria, from a small startup in Redmond, Washington called Heapsylon, is a very special pair of socks indeed. It’s a fabric embedded with pressure sensors–an “e-textile,” in the language of the startup. It senses pressure from a few specific points in the foot, like under the first metatarsal (the bone that’s connected to your big toe) and the heel. That seems to be all that’s going on in the socks themselves–just pressure sensors.

Oh, and Redmond, Washington might sound familiar to you–it’s also the home of Microsoft, and the founders of Sensoria are indeed Microsofties, from the world-class Xbox Kinect team.

Welcome to Sensoria from Heapsylon on Vimeo.

The Sensoria system beams this data to a small anklet, which handles the processing and beams it via Bluetooth to a smartphone. Heapsylon then analyzes the data, and it seems like it can do some pretty impressive things. If you’re 5’11” and weigh 180 pounds, Heapsylon can take that mere pressure data and figure out that, say, your stride length is a couple inches shorter than the average for people of your height and weight. Why not try to lengthen yours?

Or it can potentially reduce injury by figuring out if you’re landing too hard on your heel or at an unsafe angle. A large percentage of people have improper running or walking techniques, which can result in or exacerbate all kinds of medical problems, from plantar fasciitis to shin splints. Sensoria could actually alert you in real-time that you’re doing something wrong. It’ll deliver this information through a web client or app that’ll look something like this: 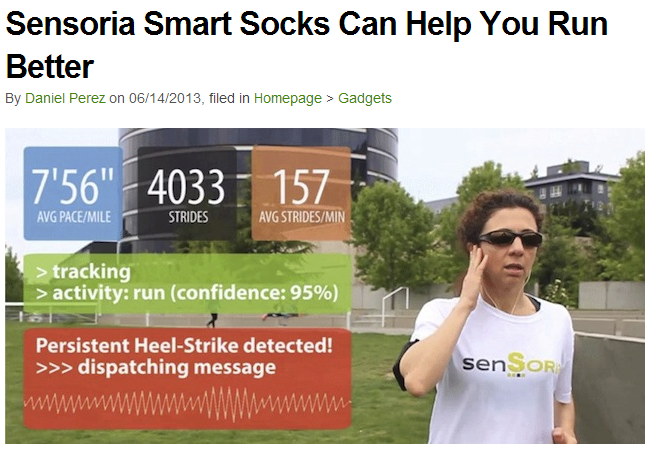 The team insists that the socks feel normal, not scratchy or stiff, and that they can actually be put through a regular wash/dry cycle. They’re hoping to sell the first pair for about $150, with a three-pack after that selling for about $60, starting sometime next year.