It's all in the wrist. 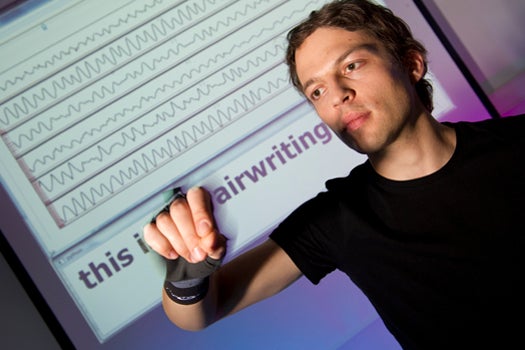 Though smartphone technology has evolved to be able to treat your depression and drive your robot, one basic function — typing — can still be a total pain. Stabbing at your tiny touchscreen keyboard with club thumbs doesn’t make for an effective texting method. Computer scientists at the Karlsruhe Institute of Technology in Germany felt they could design a better way to type using gesture control.

Enter “airwriting,” a system currently in development to turn the movements you make as you write in the air into typed letters.

A thin, glove-like wristband is equipped with acceleration sensors and gyroscopes like those already found in a cell phone. It recognizes handwriting movements and transmits them to a computer with a wireless signal. It can distinguish between when you’re actually trying to write, versus when you’re cooking or doing laundry, the researchers say — in case you were planning on cooking while wearing your high-tech handwriting gloves.

The setup sounds like a more specialized incarnation of MYO, another recently announced wristband-operated gesture control system that aims to allow you control anything digital with a simple muscle movement.

The handwriting recognition system works using statistical models for every letter of the alphabet and can adapt to different individual writing styles. It currently recognizes 8,000 words and the differences between capital and lowercase letters, so it can properly convey how excited you are about airwriting.

When it adapts to a user’s handwriting, the system has an error rate of only 3 percent, according to inventor Christoph Amma, a doctoral student at KIT. For a new user it has an 11 percent error rate.

The project just received a Google Faculty Research Award for $81,000, which the researchers hope will allow them to make the device more comfortable to wear. They’re also planning on integrating the system into a smartphone so that you could wave your phone around to type instead of using a wristband or a keyboard (texting in public might get dangerous, though). It’s unclear when it will be made available commercially.

Of course, it seems pretty tiring to have to wave your hand around in the air for as long as it takes to write out a message, and handwriting is slower than typing anyway. But it could be a blessing for those of us whose fat fingers just weren’t made for tiny smartphone keyboards. Plus, it’s harder to spill coffee on your wristband than a keyboard.