After the explosions yesterday at the Boston Marathon, police departments used social media to send out immediate updates. 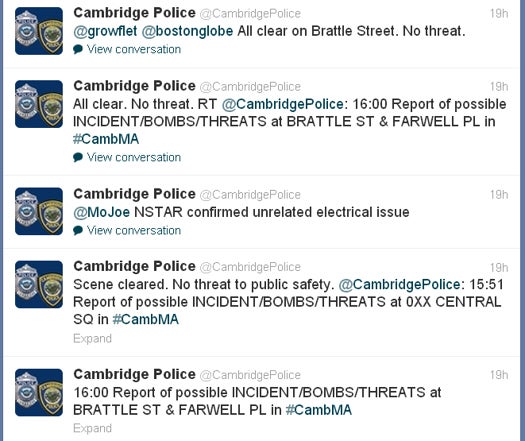 Since the mid-1970s, police scanners have been the only way for civilians to access real-time updates from police departments. Scanners work by flipping through multiple open radio conversations on emergency channels, providing an overall picture of a crisis from the people on the ground reacting to it. Because they offer fast and direct first-hand accounts, scanners have been invaluable for coordinating and linking emergency response.

But yesterday, the real-time updates from Boston came mainly through Twitter. In fact, the news broke on Twitter more than 10 minutes before national media began reporting on the explosions. This photo was tweeted just four minutes after the first bomb went off:

Deadspin was first to publish a news story, 13 minutes after the attack (and the post consisted almost entirely of updates from journalists and witness on Twitter.) As more news from Boston came in, I joined at least 53,000 people in following along with the Boston, Police, and EMS emergency feed. How’d I find the feed? Twitter. Over the scanner, authorities urged listeners and Bostonians to take to social media, as phone networks were likely to be overloaded. The Cambridge Police Department Twitter account became an invaluable source of information for many as it tweeted reports of new threats and then issued all-clears when appropriate.

As with all security broadcasting, there’s a potential downside—nothing filters this information away from criminal ears or eyes, and easy access to police communication poses a risk to officers who could be ambushed.

Some Twitter users have even begun transcribing mundane police scanner exchanges for a national, online audience. Mashable recently profiled Alex Thompson, the woman behind the @Venice311 Twitter account, which broadcasts scanner chatter in the Los Angeles metro area as easily-digestible written information. She was inspired to do so after witnessing a gross crime (literally, not metaphorically—someone dumped “50 gallons of raw sewage from his RV onto the street” where she lived.)

What makes Twitter the next logical leap from the police scanner is the immediate interactivity it provides the public: Police can respond to and broadcast inquiries like a real-time FAQ. And unlike scanners, Twitter isn’t regionally restricted, and it doesn’t cost $100 to $500 to access.