Was the 2013 World Press Photo Of The Year A Fake? 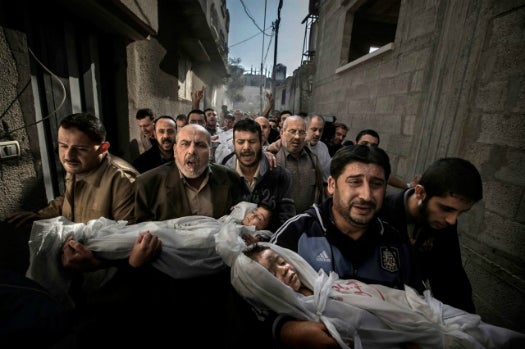 In February, the winner of the prestigious World Press Photo of the Year award came under fire after allegations surfaced that it had been significantly altered. The organization has stood by the photo, but a forensic image analyst, Neal Krawetz, now claims his analysis proves that it is a composite of multiple photos.

The photo in question, an image by Swedish photographer Paul Hansen called “Gaza Burial,” shows a group of men carrying the bodies of two children killed in an airstrike through Gaza City. According to the results of a forensic analysis published by ExtremeTech yesterday, it might be a composite of three different photos spliced together and then altered to illuminate the faces of the subjects. The photographer has denied the allegations.

Krawetz, a computer scientist and author who specializes in “non-classical computer forensics,” blogged about his reservations with the photo, which he saw after a friend sent him an article on the controversy. By looking at the file’s Photoshop save history, the shadow placement in the image and an error-level analysis of the pixels in the photo, Krawetz says he found that Hansen’s image was significantly manipulated–a controversial topic in documentary photography.

Basically, as far as we can surmise, Hansen took a series of photos — and then later, realizing that his most dramatically situated photo was too dark and shadowy, decided to splice a bunch of images together and apply a liberal amount of dodging (brightening) to the shadowy regions.

Hansen responded today in an interview with news.au.com, denying that the image was a composite or in any way fraudulent. He explained his process like this:

In the post-process toning and balancing of the uneven light in the alleyway, I developed the raw file with different density to use the natural light instead of dodging and burning. In effect to recreate what the eye sees and get a larger dynamic range.

To put it simply, it’s the same file – developed over itself – the same thing you did with negatives when you scanned them.

World Press Photo has previously defended Hansen’s work. Santiago Lyon, the director of photography at the Associated Press and chairman of the 2013 contest jury, said in a press conference earlier this year that “we are confident that the images conform to the accepted practices of the profession” and that some images had been disqualified from the competition based on alteration.

“Paul Hansen has previously explained in detail how he processed the image. World Press Photo has no reason to doubt his explanation,” the organization stated to the Huffington Post UK today. But they will be doing some forensic sleuthing of their own in response. “However, in order to curtail further speculation – and with full cooperation by Paul Hansen – we have asked two independent experts to carry out a forensic investigation of the image file. The results will be announced as soon as they become available.”