Finally, science solves that age-old question: How can I be more popular on the Internet? 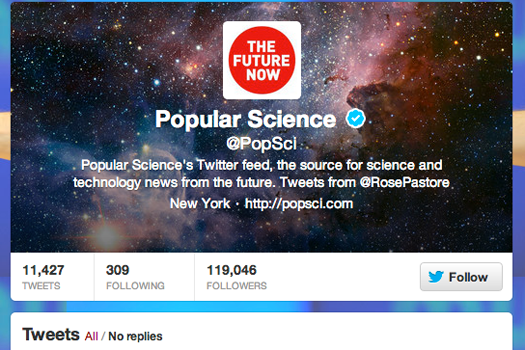 Desperate to up your Twitter follower account? Rather than staging a fake account hack or pulling a Mitt Romney and buying followers, you could do what we always do: turn to science.

A study from the comp.social lab at Georgia Tech — a research lab that designs and analyzes social media — suggests that to boost follower growth, the content you’re tweeting and who you interact with are more important than when you tweet or who you follow. The paper will be presented at CHI 2013, an conference in late April on human-computer interaction.

For more than a year, three researchers tracked more than 500 active, non-celebrity public Twitter users, checking in every three months to look at the users’ behavior, the content of their messages and their social network. The team says this is the first longitudinal study of following predictors.

They found that when it comes to growing a social network, factors like social behavior and content were just as important as your “social capital”: or your relative worth within your social network. Informational tweets (like those that contain links or news) were 30 times more effective in attracting followers than “meformer” content — personal information about the user like artful brunch pictures or updates about their Netflix queue. The users they studied posted informational content 24 percent of the time, while 41 percent of their tweets referenced themselves in some way.

Previous research showed that three types of behavior that can affect your online social capital: directed communication with specific individuals (including favoriting), broadcast communications (tweets without an @), and passive content consumption.

On Twitter, how much time you spend “broadcasting” rather than directly engaging with other users, your “burstiness” (how many times you tweet per hour), and how complete your profile is all significantly impact your follower growth. The full list:

The relative effect various factors have on your Twitter following. Green indicates a positive growth in followers and red indicates a negative effect.

Being overly negative in your tweets was the second most harmful factor in growing an army of Twitter followers. Most people tweet about twice as much positive or neutral content as they do negative content.

The authors explain a possible reason why no one wants to follow @NegativeNancy:

This might be because Twitter is a medium dominated by very weak social ties, and negative sentiment from strangers may be unpleasant or uncomfortable for a potential new follower to see. For existing ties, on the other hand, negative expressions such as the sharing of a death, poor health, bad news, or a state of unhappiness, can trigger opportunities to build bonding social capital between stronger ties who want to seek and provide emotional support.

Being “retweet worthy” is good for your follower count, because retweets are a “digital public good,” providing both attribution to the original author and informational content. Accounts with a more narrow topical focus attracted more followers, as did accounts with a higher “Tweet Reading Difficultly Index” — accounts that were more well-written. “Hashtag abuse” ranked high on the list of detractors.

Some other fun stats:

The researchers coolly note that “follower count is important to Twitter users: it can indicate popularity and prestige.” Yes, and it’s directly correlated to my sense of self-worth. It’s time to up my burstiness.