Important Facebook Research: Where To Go To College If You Want To Find A Spouse

Because no one goes to college to learn. 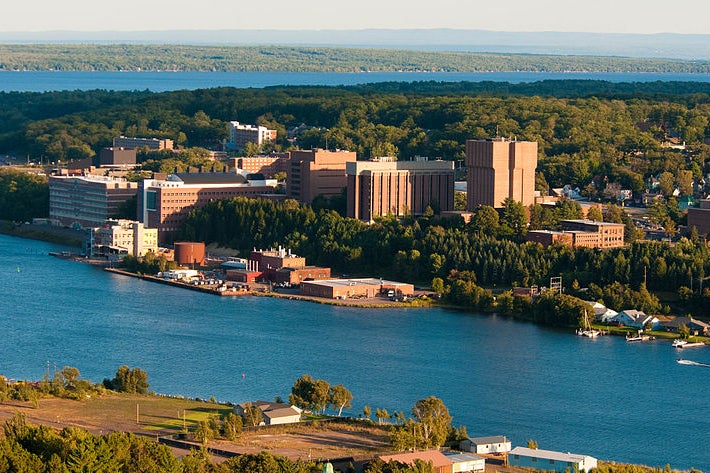 The upside to Facebook carefully tracking your entire life: so much room for statistical analysis! Facebook’s Data Science Team recently took a look at where people met their spouses and reported back on the best colleges to meet your future ol’ ball-and-chain, taking data from all couples in the U.S. who listed themselves as being married to each other and cross-referencing it with the schools they listed in their profiles.

The results: Around 15 percent of people went to the same high school as their current spouse. It’s more likely that you would have married your high school sweetheart in a more rural area compared to a densely populated one. And about 28 percent of married college grads hitched themselves to a fellow alumnus. 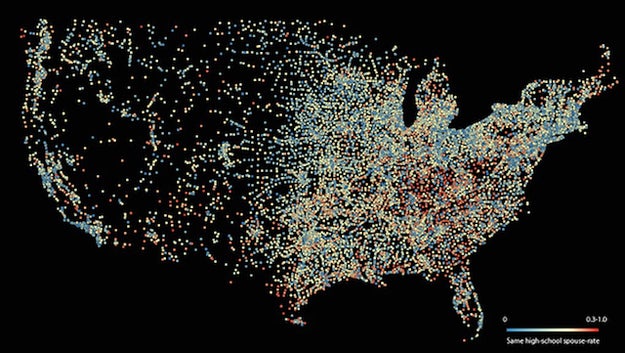 Digging a little deeper to the real results: Where are you most likely to earn an M.R.S.? Maybe unsurprisingly, a college with a whole heck of a lot of dudes to choose from. (The study didn’t distinguish between the gender of spouses but noted most of the couples were heterosexual.) The top universities where women meet their husbands: Indiana’s Rose-Hulman Institute of Technology (more than 80 percent male), Michigan Technological University (70 precent male) and the U.S. Air Force Academy (87 percent male). Most of the universities on the top 25 list for the ladies only had a few thousand students (notable exception: Brigham Young University clocked in at No. 5) and many had a religious affiliation. A whopping 70 percent of women who graduated from Rose-Hulman went to the same school as their spouse.

For dudes, the data is less interesting. Faith Baptist Bible College and Theological Seminary, a school with less than 500 students, clocked in at No. 1 with 67 percent of married men meeting their lovely lady there. BYU again came in fifth. Most of the colleges on the top 25 had a pretty even proportion of men to women. Again, many of them had a religious affiliation. 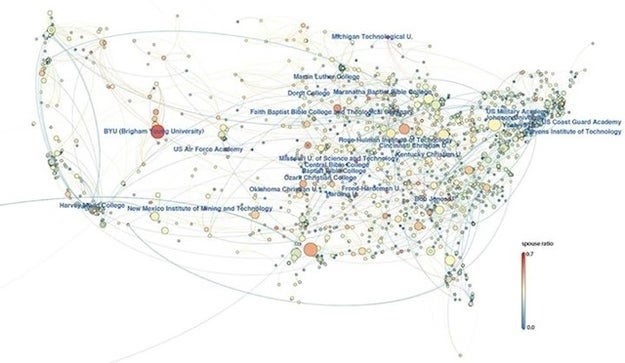 Red circles indicate it’s very likely that alumni from that school married each other. The lines indicate that two colleges have an unusually large number of intermarried alumni. Click [here to see the image a little larger.

Naturally, this data set isn’t comprehensive by any means. Obviously, it’s limited to people who have Facebook accounts and list both their spouse and the school they attended. Only users over the age of 25 when the data was gathered were eligible…maybe to reduce the amount of college kids who list themselves as joke-married to their BFF? It doesn’t take into account whether people met their spouse before deciding to attend the same school, or whether the couple didn’t date until after school.

But still. Why bother comparing meaningless attributes like dorm amenities, professor-to-student ratios or intellectual rigor when you can get to the real heart of the college selection game: Where will you find someone to agree to legally shackle themselves to you for the rest of eternity?