A prosthetic limb that puts athletes back in the game. 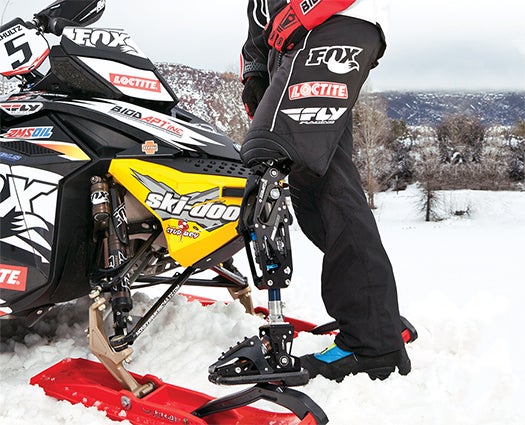 During a professional snowmobiling race in 2008, Mike Schultz lost control of his machine while speeding over a ragged stretch of snow. His left foot hit the ground so hard that his leg hyperextended nearly all the way in the wrong direction, shattering his knee and forcing doctors to amputate just above the joint. “I’m looking at my wife saying, ‘What are we going to do now?’ ” Schultz says. “I’m a professional athlete, and I’m not going to be able to do this stuff anymore.”

Schultz’s instinct was right: Conventional prosthetic legs couldn’t stand up to his high-impact lifestyle. So in early 2009, he designed and built a limb that could. Its key feature was the Moto Knee, which uses an adjustable 250psi mountain bike shock absorber to regulate the joint’s stiffness with compressed air. But snowboarders and skateboarders also require critical toe pressure and ankle tension, so Schultz added the Versa Foot—a foot-ankle assembly that also uses a pneumatic shock absorber to emulate joint resistance. Together, the two parts complete an artificial lower limb that’s impact-resistant, waterproof, and quickly customizable for a range of high-performance activities.

Schultz recently returned to competition and won a gold medal at the 2013 X Games Aspen. This spring, he expects to sell his new-and-improved prosthetic not only to amputee atheletes, but also to soldiers returning from conflicts with missing limbs. “This whole project started out because I wanted to allow myself to do the things I wanted to do, but it’s evolved way past that,” Schultz says. “I’m helping people do things they haven’t done since they had two good legs, and that’s worth it right there.”