Titanium femurs are real, but so are their risks

Big artificial bones are a last resort for surgeons trying to prevent amputations. 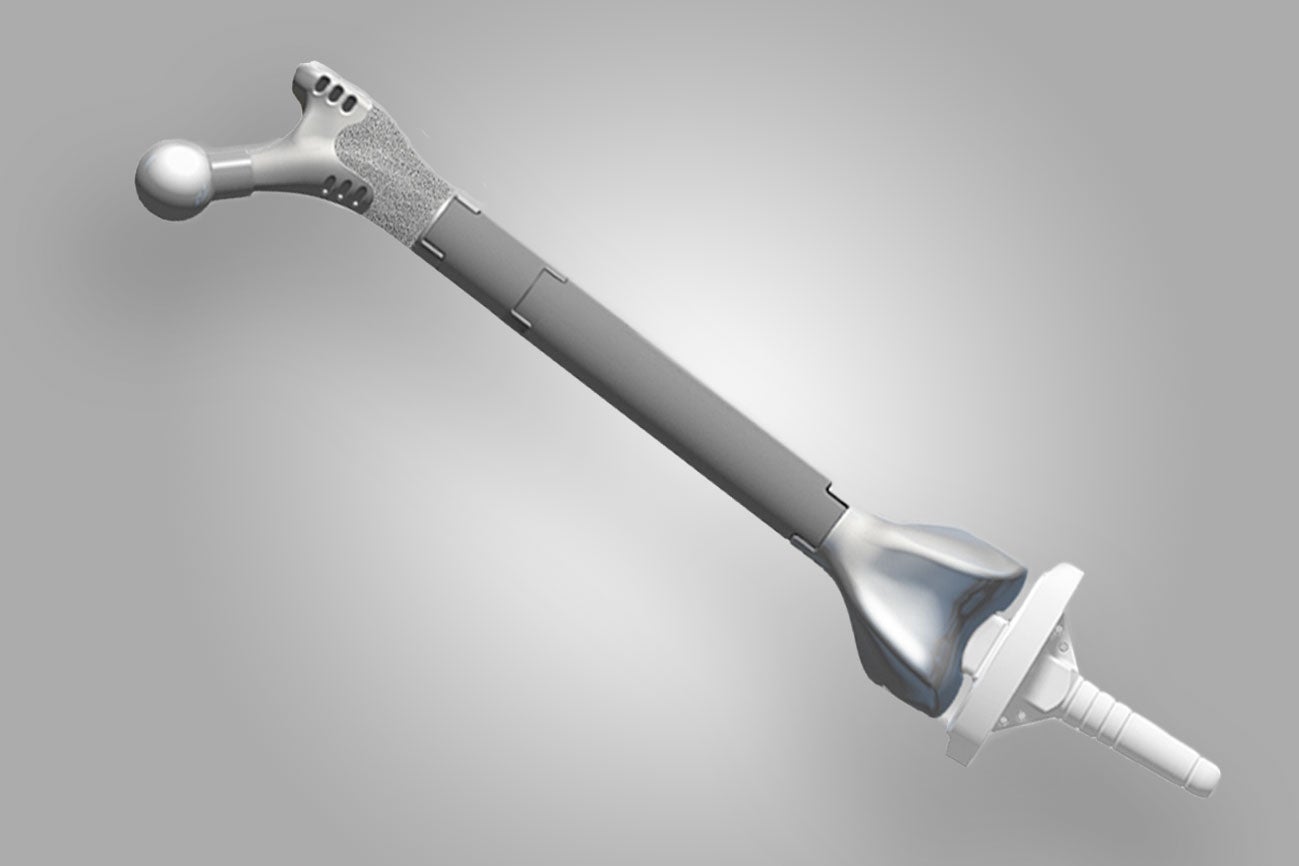 This total femur from Stryker is made from titanium, cobalt chrome, and polyethylene. Stryker
SHARE

In a 2017 episode of ABC’s medical drama, The Good Doctor, a patient’s thigh bone is so shattered following an accident that, instead of amputating the leg, the physicians in the show 3D-print a titanium femur and insert it into the man’s leg. Presto: The limb is saved. The episode is called “Not Fake”—a reference to the fact that the artificial bone is real. It’s just not biological.

The plot resonated with me because I have a real artificial hip, a prosthesis made of titanium, ceramic, and polyethylene plastic. And I’m happy about it; it’s done a better job at getting me out of pain than previous hip surgeries, which didn’t involve replacing the joint, did. And while I expected the idea of a giant artificial femur to be TV fiction, they’re actually real, too. They’re rare, and not without the possibility of major complications, but they could allow a surgeon to save a limb—just not in the way that The Good Doctor presents.

“They do exist,” says Michael Alexiades, an orthopedic surgeon at the Hospital for Special Surgery in New York, “and they don’t necessarily need to be 3D-printed.” Instead, medical-device companies like Zimmer or Stryker manufacture full replacements or sections of a femur, and surgeons can adjust the size of the implant to fit the patient. An artificial humerus, the big bone in the upper arm, also exists.

These “megaprostheses” are only used as an extreme option. One of the main reasons a patient might need an artificial femur—called a “total femur” in the medical industry—isn’t a traumatic accident: It’s cancer. “There are specific tumors that have a predilection for the femur itself,” says Neil Sheth, the chief of orthopedic surgery at Pennsylvania Hospital. Most of a femur’s growth happens in the area down by the knee, and as that growth is happening, a tumor can develop there. In those events a surgeon may need to replace part of the femur, or the entire bone, with a megaprosthesis.

Another is because of complications that can stem from having an artificial joint. Surgeons install hundreds of thousands of artificial hips and knees into patients each year in the US. Experts have fine-tuned the procedure and devices over the decades so that a patient can receive a new hip and go home the same day, as I did; the new part can last for an estimated 25 years or more. But some artificial joints become infected or develop other problems, forcing surgeons to revise earlier work and replace them. That can lead to bone loss in the areas that the artificial joint attaches to.

In those cases—a tumor on the bone, or severe problems resulting from artificial joints—the surgeon may install a total femur, connecting an artificial hip with an artificial knee. Having one is a sign that a patient has been through some serious medical trauma: “Something went very wrong somewhere along the way,” Sheth says.

Using these kinds of big prosthetics is a last resort before amputation, and surgeons always prefer to preserve as much of the body’s natural biological material. Once it’s out, it’s not going back in, and the replacement hardware can cause further complications. For instance, if a total femur becomes infected, Sheth says a patient may potentially lose the entire leg.

While artificial hips are typically a successful procedure, total femurs are dicier. One small study from Munich, Germany of 22 cases pegs the failure rate at nearly 60 percent. Failure in that context means that the patient needed another surgery because of serious complications, like a deep infection or the hardware mechanically breaking. (The study’s first author is aware of at least two individuals who ended up having their leg amputated anyway after the study period ended.) Meanwhile, Nicolas Piuzzi, an orthopedic surgeon at the Cleveland Clinic in Ohio, puts the risk of needing a subsequent surgery slightly lower, from 20 to 50 percent at five years following a megaprosthesis’s implantation. In short, it’s risky.

It’s reasons like these that surgeons say the main goal is to avoid having to put a big prosthesis in patients in the first place: Their aim is to keep or even regenerate the body’s natural tissue if they can. After all, bones are made of living cells. “The frontier is really in trying to restore native things,” says Geoffrey Marecek, an orthopedic trauma surgeon at Keck Medicine of the University of Southern California.

Instead of 3D printing a titanium femur like in The Good Doctor, a better use of synthetic materials would be to employ it to guide new bone growth. Marecek envisions a scenario where practitioners 3D print scaffolding in the shape of a patient’s bone, and then add stem cells, or perhaps bone from elsewhere in the patient’s body. “With that we’re able to actually generate a new femur, rather than having to resort to using a metal and plastic new femur,” he says.

“That’s where we’re all trying to get,” he adds. It’s a push-pull between using artificial materials where they work well—like in prosthetic hips—and looking for new ways to not have to use synthetic substitutes.

At NYU Langone Health, Timothy Rapp, a surgeon who focuses on removing tumors from bones, does something in between the two ideas. In some rare cases, like removing a tumor from a patient’s pelvis, he’ll use a 3D printed-plastic component that’s been custom-created based on CT scans of the patient’s anatomy. The part (which he says resembles a dog toy) then becomes a template for cutting. “We can use these custom-made jigs that you can screw into somebody’s bone, and then accurately cut out the bone that you want and reconstruct it,” Rapp says.

Other 3D-printed plastic can then help them carefully excise healthy bone from another part of the patient’s anatomy, like the fibula, to fill the space where they’ve cut out the tumor. Rapp credits the technique with speeding up his work in the operating room.

In other words, artificial femurs are imperfect but serve a crucial purpose. “Patients that come in that need a total femur replacement—their expectations are on the ground,” says Sheth of Pennsylvania Hospital. “If I can put this in, get them out of pain, and save their limb, their expectation has been so superseded compared to what they thought was going to happen.” That’s in stark contrast to someone receiving a hip replacement, who expects the new joint to be better than the natural one they had before.

Like Marecek, however, Sheth hopes for something beyond artificial components. “I truly believe that in the next half century-plus, people will probably think that we were barbarians, replacing joints with metal and plastic,” he says. “They’ll come up with a biologic solution at some point.”