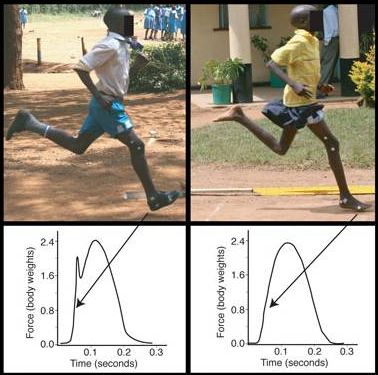 All the latest footwear engineering in your running sneakers might not mean a thing when it comes to preventing injuries. The latest barefoot running study in the journal Nature deployed 3-D infrared tracking to gauge the difference in foot strike between shod and shoeless runners, Scientific American reports. Here’s a modern-day meme summation of the findings: “Shoes? You’re doing it wrong.”

Runners who wore sneakers ended up landing heel-first 75 to 80 percent of the time. By contrast, barefoot runners usually land toward the middle or front of the foot — a dramatic difference that recalls the more natural foot strike of early Homo sapiens. Needless to say, early humans certainly were not born to run wearing Nike or Reebok.

The heel-landing without shoes means a painful collision force of 1.5 to 3 times human body weight. But cushioned sneaker heels have allowed runners to change their stride to high-impact running, and likely open up a whole world of pain involving foot and leg injuries.

“Most people today think barefoot running is dangerous and hurts,” said Daniel Lieberman, a professor of human evolutionary biology at Harvard University and lead author on the study. “But actually you can run barefoot on the world’s hardest surfaces without the slightest discomfort and pain.”

Lieberman and his colleagues point out that modern running shoes did not come about until the 1970s — a fairly late invention that latched onto that then-new fad known as jogging (or “yogging” as Ron Burgundy says). Now contrast several decades of sneakers with a human body that evolved barefoot running over thousands of years, and you begin to see a potential problem.

More bad news for sneakers came last December, when the American Academy of Physical Medicine and Rehabilitation found that running shoes can increase joint torques at the hip, knee and ankle. Their study suggested that even going for a run in high heels was better for preventing joint injuries than tennis shoes.

Runners who fear years of soft treatment giving way to foot calluses still have options. Certain footwear such as the Newton Running shoes or the Vibram Five Fingers permit runners to readjust their foot strike back to the more natural way, or simply act as a second tough skin to protect the foot in the latter case.

One more unstated benefit of running without sneakers — you’ll never, ever have the temptation of wanting to remove your toenails.