Homemade Jetpack Designed To Reach An Altitude Of 25,000 Feet 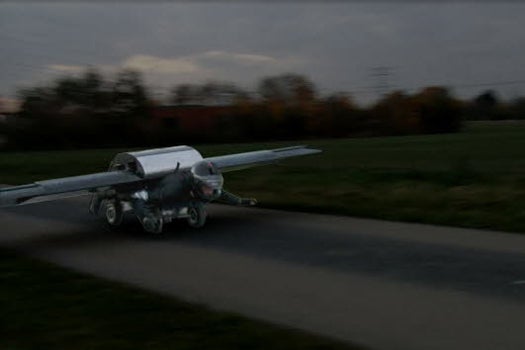 It’s 2013, so we’ve all been wondering: Where’s my jetpack? The future won’t have truly arrived until we can strap into a backpack and fly ourselves around town. And while that’s not exactly here, it’s getting a whole lot closer.

Fritz Unger’s Skyflash is a homemade jetpack designed to eventually reach a maximum height of 25,000 feet. Unger and his friend have been working on the project since 2007, but have started running piloted tests on the engines and the wing mechanism in the last few months.

Unlike many other jet wings, Skyflash is designed to take off from the ground, rather than being dropped from a helicopter or plane (perhaps because the name Skyfall has already been taken).

Inspired by the wings of a condor, the largest flying bird in the western hemisphere, what the Skyflash creators call “the ultimate flying backpack” has a wingspan of about 11 feet and is powered by two turbo jets. The team’s Facebook page ambitiously says it will be capable of speeds of 200 miles per hour, but for now Giz Mag is reporting that it has a cruising speed of 78 miles per hour at heights of up to 11,800 feet.

“I wanted to fly free as a bird. I wanted to get rid of the air frame and everything you typically need,” Unger told the Discovery Channel.

For the first road test with a pilot, Unger tried his prototype with just one of the engines, getting up to 30 miles per hour on the ground.

Later they tested it with both engines and no wings, dubbing it the “World’s Craziest Snow Blower.”

The project has gone through three prototype wings. Right now the model is made of plywood, but the next step will involve fiberglass construction and even more powerful engines. Without a pilot, it currently weighs 25 kilograms, a little more than 50 pounds. It’s controlled by a throttle and an 8-inch display strapped to the pilot’s wrist, which connects to a computer within the central wing body.

Climbing and steering are achieved by the pilot shifting his body weight. The heat-proof boots worn aren’t just a precaution, but a design feature because the jets’ thrust angle is controlled by dipping the boots into the exhaust like the control vanes on a V2 rocket. To turn, the pilot stretches out an arm and climbing is done by bending the knees.

The Skyflash team is planning a full test flight sometime in the middle of this year, which hopefully means they’ll actually get up into the air. Before you get too excited, though — they may not have figured out a way to land it yet. They say a safe landing is achieved “the same way you took off.” In case of an emergency, the wings have a quick release option and the body contains a parachute, but it’s unclear what a non-emergency landing would look like. Since the test videos largely involve the pilot laying on his stomach on the ground, a parachute seems like a preferable landing method right now.