The Jetlev-Flyer propels itself using a torrent of water 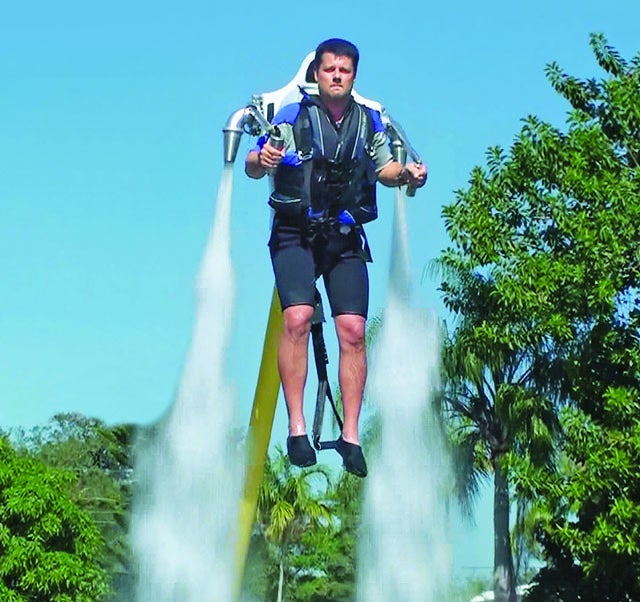 Controlled with a throttle on the handgrip, Raymond Li's Jetlev-Flyer (shown here operated by Steven J. Grey, one of Li's official demonstrators) can provide up to two hours of continuous flight. Courtesy D.G. Hubbard
SHARE

When Raymond Li decided to build a jetpack propelled by water instead of rocket fuel, most of his friends thought he had gone crazy. Worse, engineers told him it would be impossible to manage the water’s mass and thrust to keep it stable in the air. 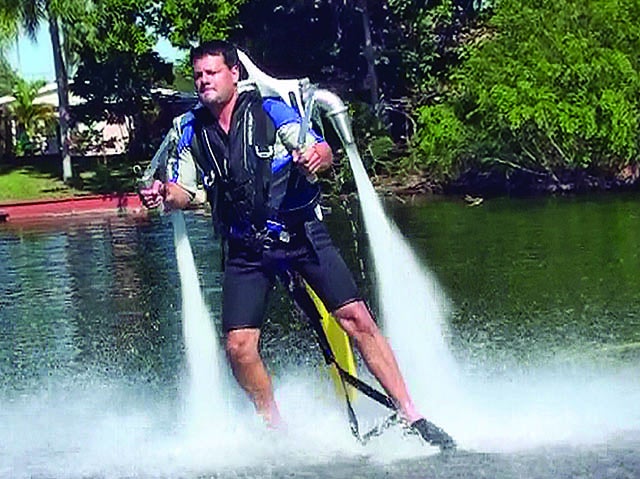 The boat is towed about five feet behind, making it easy for the operator to keep it clear of obstacles in the water.

Li, however, figured that if he attached a hose to his pack, and put the engine and water pump in a separate vessel that dragged behind him, he could seriously reduce his weight, and therefore the amount of thrust needed to stay aloft. In theory, a stiff hose filled with heavy, pressurized water would also add drag to stabilize the jetpack for better forward flight control.

It took four prototypes and more than 200 flight tests to get it right. But now, with a mere 30-pound pack, the Jetlev-Flyer is almost ready for production, generating 430 pounds of thrust and letting Li fly forward at 22 mph up to three stories high. His next unit will get up to 35 mph. Want one? Late this year, the craft will go on sale—just be ready to dish out close to 130 grand. 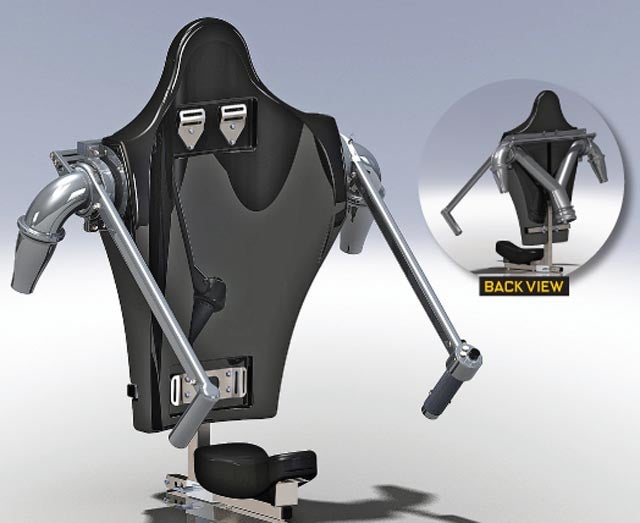 SUPPORT
Li built the backrest out of fiberglass, glued a thick layer of rubber foam to the front so it wouldn’t sink when he takes off and lands, and attached a four-point racecar-style harness to lock himself in. He also added a crotch belt, a unicycle-like seat and an acrobat’s trapeze for a footrest; all help to keep the operator in optimal flying position.

POWER
Li custom-built the first boat unit out of plywood and fiberglass, but his latest prototype is an extensively modified Jet-Ski with a 215-horsepower engine, which powers an onboard pump attached to it by a direct-drive shaft. The pump connects to a 33-foot-long, four-inch-diameter polyester-and-rubber hose. The production craft, a smaller and lighter pod, will come with a 260hp engine.

THRUST
The Y-shaped assembly on the back, as well as the jet nozzles and the handlebars that steer them, are custom-fabricated aluminum tubes. Li attached the assembly to the harness above the body’s center of gravity so that, in flight, the operator is suspended beneath it. He takes off from the water, hits a trigger on the handgrip to start the pump on the pod behind him, turns the throttle, and two streams of high-velocity water of up to 60 psi lift him as high as 30 feet in the air. To go forward, he pushes down slightly on the handlebars, angling the nozzles to a maximum of 45 degrees. 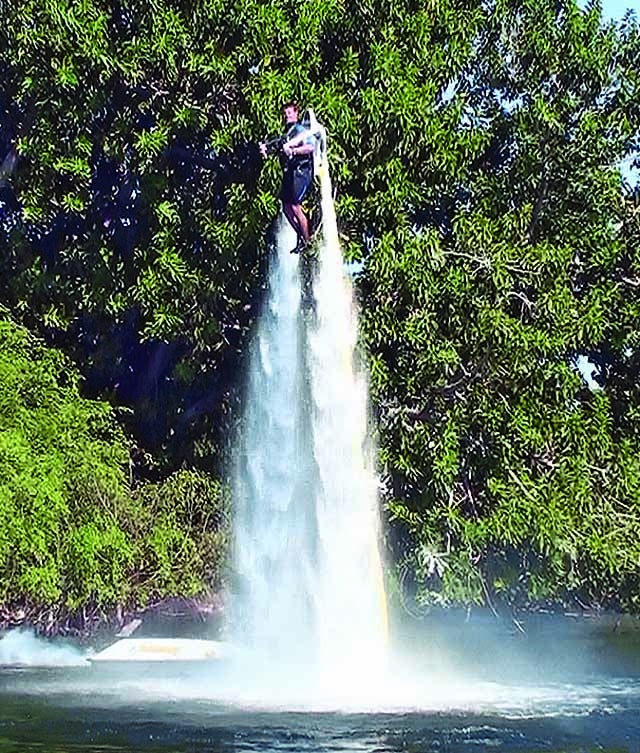 To stop the Jetlev-Flyer, the operator just eases off the throttle and lowers into the water.