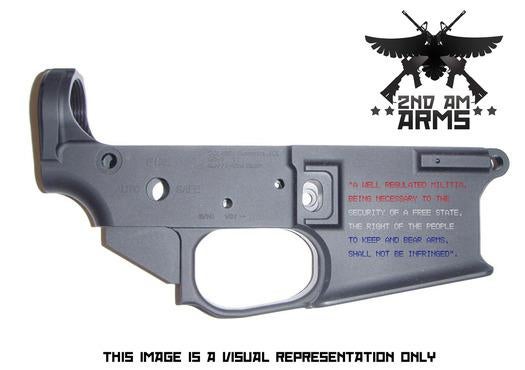 Enthusiasts of gun-law loopholes, this might be your new favorite workaround. A project at the crowd-funding site Rockethub wants to create a 3-D printed gun part for just $50. The twist: the part is only 80 percent complete, so like an Ikea desk you’ll have to finish the rest of it yourself.

Started by 2nd AM Arms, the project promises to make a lower receiver for an AR-15 semiautomatic rifle. The lower receiver is what holds all the working parts in a gun. The receiver is so important that under U.S. law, a receiver on its own is still treated as a firearm, and requires a serial number. The argument made by 2nd AM Arms, however, is that an 80-percent completed receiver is just part of a gun component, not a full-blown firearm, and as a such is not subject to the same degree of federal regulation.

What that might mean: Buy it, and you could have complete anonymity. A licensed seller of complete gun parts “must maintain records of all firearms receipts and dispositions, including the name, age, and place of residence of purchasers.” That’s not the case when selling an 80-percent complete part. 2nd AM Arms FAQs says under facts that it will “even accept cash or gold if you like as payment for those who would like to stay completely anonymous.”

So what would someone do with 80 percent of a gun part? At its Rockethub page, 2nd AM Arms links to YouTube videos detailing the kind of drilling and modification someone would need to take a part like this and make it functional.

Making the lower receiver is only one of the goals of this project. Obviously, there’s a larger agenda here: to send a political message. Just look at the other donor rewards. At the lowest level of support, 2nd AM Arms will mail a copy of the 2nd Amendment to President Obama and Sen. Dianne Feinstein (D-California), both of whom have expressed interest in stricter gun laws. All higher pledge levels include T-shirts featuring the 2nd Amendment, and if you pledge anything above $50, you get a commemorative lower embossed with the 2nd Amendment. Finally, if the project meets its funding goal (which it had as of press time), 2nd AM Arms pledges to donate 2 percent of its funding to the NRA.

Earlier this week we described the continuing developments of Defense Distributed, a band of 3-D printed gun advocates, to make a 3-D printed lower receiver. Both of these 3-D printed gun projects have a political intent, and it’s interesting to see the different ways they are aiming to skirt regulation. With Defense Distributed, it’s about people freely downloading schematics. With 2nd AM Arms, the dodge is by offering only a mostly complete product.