A new drone that's a rescuer not a predator 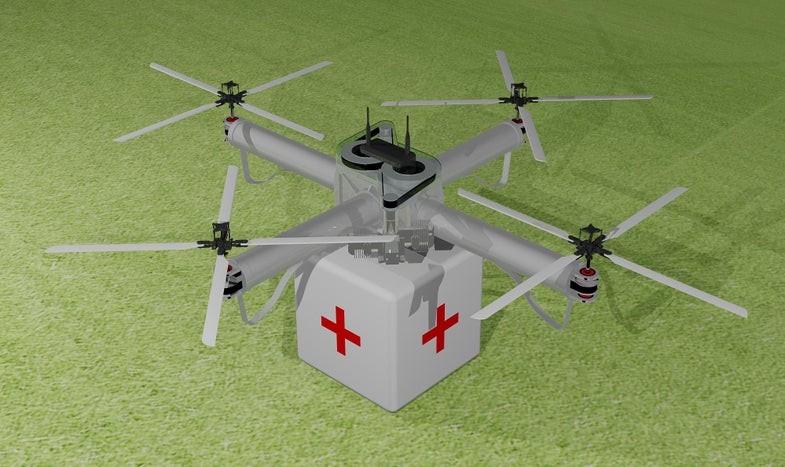 When you see this quadcopter drone flying at you, don’t run or shoot it down — it’s coming to help. A lot of drones serve as spies, assassins, or toys. But if all goes well, rescue workers and emergency response crews could soon deploy the Incredible HLQ (pronounced “hulk”) drone that actually helps humanity by zipping up to 50 pounds of provisions per trip, by itself.

The HLQ (which stands for heavy lift quadcopter) spans 6 feet with rotors and was developed by a team of student mechanical engineers from San Jose State University in California. Nick Conover, Chris Fulmer, Carlos Guerrero, and Gabriel Tellez designed the HLQ project for their undergrad senior project. And now they’re asking for help on Kickstarter to build a full prototype.

HLQ is not the world’s first unmanned cargo carrier. There’s the K-Max, a full-scale unmanned helicopter, and Matternet’s infrastructure paradigm, which aspires to launch do-gooder drones in rural areas. But the latter focus on small payloads like medicines or lab samples, and max out at 4 pounds. And the K-Max costs millions of dollars. HLQ can lift heavy cargo and would cost a fraction of that.

Onboard the 50-pound HLQ, an open source Arduino board called Ardupilot that is pre-programmed for unmanned aerial vehicle control runs the show. The team augmented that with a one gigahertz processor give HLQ computer vision, and enable the quadcopter to fly autonomously. The students will fabricate the arms of HLQ, which double as drive train, from aluminum to dissipate heat from the motors and have designed them to be swappable if they get damaged or need upgrades to carbon fiber. 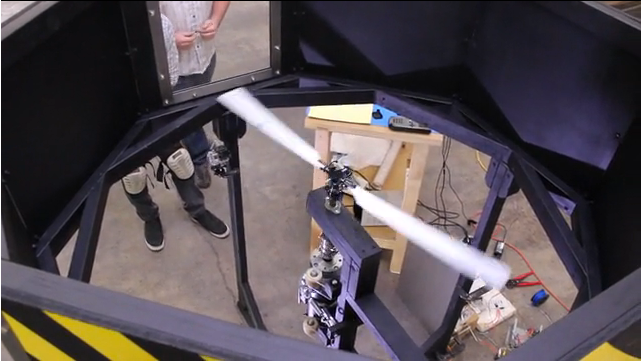 The biggest science challenge for team HLQ was how to find rotors that could provide lift needed for a heavy payload. Helicopter hobbyists generally don’t need airfoil and drag coefficients. So the engineers built an arm with a motor to test various rotors. In the prototype, they’ll power these 16 blades with two 12.5 horsepower gas model airplane engines. At full speed the tips whiz at the speed of a low velocity bullet, so they caged the test arm. You can check out the rig in this video at 1:29 —

If all goes as planned, emergency responders could feed HLQ GPS coordinates to pickup and drop off supplies like water, food, and shelter. In a massive catastrophe like Sandy or Fukushima where access was nearly impossible, fleets of HLQs could converge on stockpiles and get to work. The engineers estimate one gallon gives the HLQ a 30 minute flight time. They won’t know speeds until the full prototype is built.

The HLQ will use ultrasonic sensors on initial descent to find boxes for delivery. When within 20 to 30 feet, HLQ switches to a camera with computer vision to hone in on a large distinct pattern on the top of boxes to calculate distance more accurately. The quadcopter will dock with boxes via a simple module repurposed from quick-release garden hose connections.

Nick Conover, team lead, said the HLQ prototype will cost roughly $10,000. The relatively low price tag could extend the capabilities of small search and rescue teams that can’t afford their own helicopter and staff to include aerial intervention before evac.

Conover’s team has leveraged donated parts, their school’s mechatronic lab, and a nearby TechShop filled with wonderful toys (ahem), I mean tools, like laser and plasma cutters, welders, and CNC machines. Still, the full build doesn’t quite fit in a student budget next to ramen. So HLQ took to Kickstarter in hopes of building the beast by the time they graduate later this year. With 11 days remaining, they’re still four Benjamins short of their quite reasonable $7,500 goal.

Team HLQ will probably still graduate even if they don’t build HLQ. But as any maker knows, nothing is more frustrating than the idea that got away.

But there’s hope. Conover told PopSci that their design has captured the attention of some companies and philanthropies. One of those, Sky Angels International Rescue, a UK-based foundation that launched this year with a focus on air-delivered assistance, is a backer and has even promised to top off any funding shortfall on Kickstarter.

There’s another less philanthropic, but no less human hope for the Incredible HLQ — one Kickstarter backer wants pizzerias to fire delivery boys and employ the quadcopter in the noble task of late night pizza deployments. And while the Incredible HLQ might not lift humans yet, maybe it can rescue puppies and kittens.