Program An Arduino In A Few Simple Steps

An Arduino is a popular open-source single-board microcontroller. Learn how to program one and let the possibilities take shape. 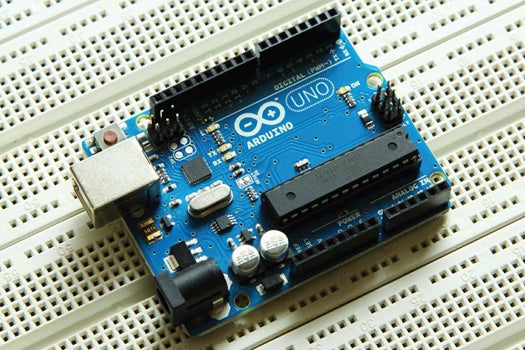 STEP 1
Arduino microcontrollers come in a variety of types. The most common is the Arduino UNO, but there are specialized variations. Before you begin building, do a little research to figure out which version will be the most appropriate for your project.

STEP 2
To begin, you’ll need to install the Arduino Programmer, aka the integrated development environment (IDE).

STEP 3
Connect your Arduino to the USB port of your computer. This may require a specific USB cable. Every Arduino has a different virtual serial-port address, so you ‘ll need to reconfigure the port if you’re using different Arduinos.

STEP 4
Set the board type and the serial port in the Arduino Programmer.

STEP 5
Test the microcontroller by using one of the preloaded programs, called sketches, in the Arduino Programmer. Open one of the example sketches, and press the upload button to load it. The Arduino should begin responding to the program: If you’ve set it to blink an LED light, for example, the light should start blinking.

STEP 6
To upload new code to the Arduino, either you’ll need to have access to code you can paste into the programmer, or you’ll have to write it yourself, using the Arduino programming language to create your own sketch. An Arduino sketch usually has five parts: a header describing the sketch and its author; a section defining variables; a setup routine that sets the initial conditions of variables and runs preliminary code; a loop routine, which is where you add the main code that will execute repeatedly until you stop running the sketch; and a section where you can list other functions that activate during the setup and loop routines. All sketches must include the setup and loop routines.

STEP 7
Once you’ve uploaded the new sketch to your Arduino, disconnect it from your computer and integrate it into your project as directed.

This project was excerpted from The Big Book Of Hacks: 264 Amazing DIY Tech Projects, _a compendium of ingenious and hilarious projects for aspiring makers. Buy it here.