Perhaps the best smartphone Sony's ever made. But that's not saying all that much. 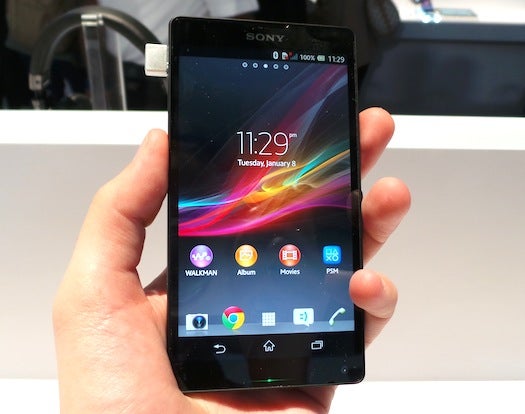 For a company that pioneered mobile gadgets with the Walkman, for a company that owns a major record label and movie studio, for a company that has historically been one of the biggest and best electronics companies in the world, Sony is awful with smartphones. They were held up for crucial years while absorbing Ericsson, but that’s no excuse–Sony should own this category. So I went over to Sony’s massive CES booth to see if the new Xperia Z could be the one that finally brings Sony up to speed.

The Xperia Z runs a mildly altered version of Android, has a huge, super-high-resolution 5-inch screen at 1920 x 1080 pixels. The screen is crazy. Easily one of the best screens I’ve ever seen on a phone, especially in the deep, seductive blacks, dark and still like a desert night. (We are in the desert right now.) The phone is also very very thin, at 7.9 mm, and nicely squared-off. It’s super light as well; even though it’s made of glass, it feels as light as a plastic Samsung phone. The back panel is tempered glass, which the Sony rep insisted would not break, even after I aggressively thrust my broken iPhone 4S into his face and shouted “THAT’S WHAT THE LAST GUY TOLD ME!”

But easily my favorite thing about the Xperia Z is that it’s waterproof! There was a cool demo where you pressed a button and an Xperia dunked into a bath of water. I pressed the button over and over. Great demo. On the other hand, all of the ports have to be covered–USB, headphone, everything. That could be annoying; you’ll probably want to plug in headphones more often than you’ll want to take it swimming. But who knows!

The phone comes with 16GB of storage (expandable with a microSD slot), 2GB of memory, and a Qualcomm quad-core processor. In my limited testing, it seemed pretty quick, if not quite as quick as the Nexus 4, our favorite Android phone. It’s got an LTE connection, but Sony wouldn’t tell me what US network it’d be on, or even if it was coming to the US.

Oh, and there’s also the Xperia ZL, which swaps the glass back of the Z for a ridged plastic back and a slightly smaller bezel. I have no idea why there are two of these phones, and after repeated, angry questions, the Sony rep admitted he thought it was weird too.

No price or release date was announced. The Xperia Z seems like a good phone–certainly the best Sony phone I’ve used yet–but I’m not sure there’s enough here to steal the Android crown away from the Nexus 4.