The Self-Assembling, Self-Healing Material Of The Future Is… Blood

Scientists have figured out how clots form in the blood, and are using the same method to develop a new class of materials. 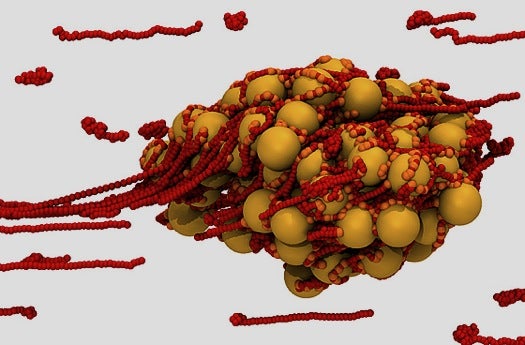 Somewhere inside of your body right now, a delicate membrane is tearing open. Now a leak is springing, and fluids that were not supposed to have gotten past the membrane are gushing through at the point of the tear.

Fortunately, this leak is very small and you can’t feel it. Unfortunately, your insides have sprung many other leaks since that first one. Fortunately, at the site of leak #1, several long, sticky molecules that were previously coiled like fruit roll-ups have come unrolled in the sudden torrent, and they’re sticking to small solid fragments and forming little globs that are getting tangled up with other globs, and now the whole blob is plugging the leak, patching things up temporarily until the reinforcements arrive.

That this process plays out many millions of times each day is one of the marvels of the human body, but that’s not why MIT materials scientist Alfredo Alexander-Katz and his colleagues have been studying it. Rather, the researchers want to replicate the process outside the human body, using slightly different ingredients to create synthetic materials that self-assemble and self-heal.

The group’s first step was to figure out exactly how the initial stages of blood-clotting works. Though scientists already knew that a bio-polymer called von Willebrand factor–the “fruit roll-up” in the scenario above–is important to the process, no one understood just how or why the molecules manages to uncoil only when they’re needed.

The key, it turns out, is speed: as the surrounding fluid begins to flow faster, gushing toward the leak, the shear force required to unroll the biopolymers increases too. As MIT news explains:

If this process were uncontrolled, such plugs would form constantly in the bloodstream, Alexander-Katz says. To counteract that, another kind of molecule also circulates: a kind of “molecular scissors,” he says, that “comes around and cuts [the plugs] to pieces.”

Most of the time, the clumping and snipping remain in balance, so no clots form. But when the flow rate increases, the vWF molecules stretch and grow stickier, and the “molecular scissors” can’t keep up — so the plug builds up.

The self-assembling, self-healing aspect of the potential blood-clot-style materials is cool and fun, in a “we’re-living-in-the-future” kind of way, but it’s actually only part of what makes them attractive to materials scientists.

The other main attraction is that these kinds of composite materials–basically, polymers mixed together with other stuff–are extremely handy and amazing in lots of ways, but no one has figured out an easy way of manufacturing them.

No one, at least, except Nature, who fortifies the ceramic in bones and shells with bio-polymers that make them 3000 times stronger than they’d be without it. But bones and shells and most of Nature’s other composites take a long time to form, so the secrets of their formulation wouldn’t be that helpful to scientists. Blood clots, on the other hand, form in a matter of seconds.

Alexander-Katz and his colleagues are currently working to simulate the process using different kinds of molecules, and hope the work will be applied to create new kinds of inks, pigments, and coatings, as well as devices like self-healing tires.