A Twitter war that's about an actual war. In real time. 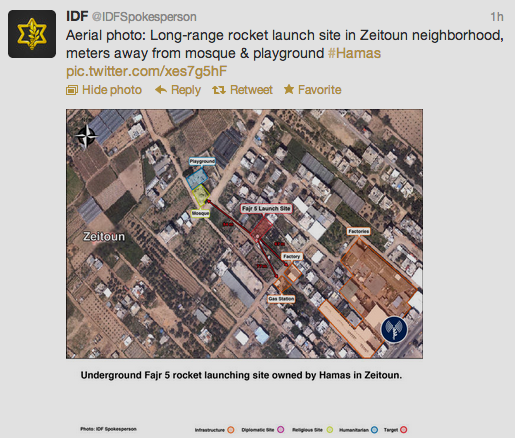 Israel launched an offensive this morning on “terror sites and operatives in the Gaza strip, chief among them Hamas and Islamic Jihad targets.”

Except that’s not what the release said: it said, “terror sites and operatives in the #Gaza strip, chief among them #Hamas and Islamic Jihad targets.” Because this announcement was made on Twitter.

The Israeli Defense Forces has a spokesperson, and that spokesperson has a Twitter feed, and that Twitter feed is where information from the Israelis is being disseminated.It’s a mix of news (“The IDF has seriously damaged Hamas’ long-range missile capabilities (40 km/25 mi range) & underground weapons storage facilities.”) and argument in favor of the strike (“Israelis living near the #Gaza Strip have been living under fire for the past 12 years.”). It’s run extremely blandly and competently, like whoever’s behind the feed was hired after proving their worth as the social media manager of Oprah Magazine. It hits all the right notes: hashtags, links to videos and articles, original photos. Hell, there’s even a custom hashtag (#PillarOfDefense) created specifically for this event.

It’d be a very well-run Twitter campaign, except it’s not announcing a new cellphone–it’s announcing a barrage of missile strikes against a neighboring territory. Those pictures are of bombing sites. The videos are of Israeli generals explaining the bombings, or even videos of the bombings themselves. That hashtag? It’s only #PillarOfDefense in English. In Hebrew, as Gawker found out, it’s #PillarOfCloud–“a Biblical reference to the form God adopted in order to protect the Children of Israel and strike terror into the heart of Egyptians.” And instead of Microsoft playfully interacting with Apple, or Domino’s and Pizza Hut trading zingers about pizza, we have @AlQassamBrigade, the Twitter account of the Al Qassam Brigades, the military wing of Palestinian political party/terrorist organization Hamas, tweeting back:

Remember when Twitter was silly? When it was about what you ate for lunch, or when it was a launching pad for comedians, or an irritating tool for self-promotion? It’s not that anymore. Now it’s the place where one of the strongest militaries in the world tells us what they’re bombing today. It’s where the IDF and Hamas interact.

You’re no longer being asked to retweet if you love Wendy’s Spicy Chicken Sandwich.