Whoa What: All US iPhone Users Can Now Make Free Phone Calls Via Facebook

No more caring about minutes. Free phone calls over Wi-Fi and 3G/4G! 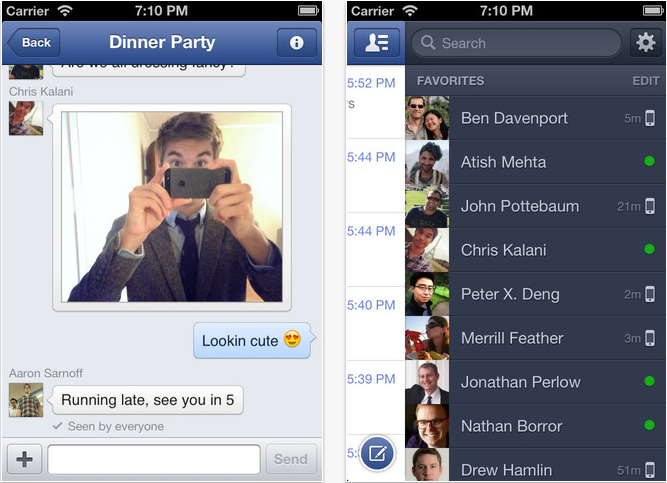 Facebook just let loose with a new update to the Messenger app for iPhone, which until now was restricted to text messaging, sort of like AOL Instant Messenger or GChat. Now it’s something totally different: it’s a Skype competitor, except you know all of your friends already use it.

The new feature lets you make phone calls using VoIP, with either a Wi-Fi connection or over your phone’s 3G/4G connection, for free. Yep, Skype can already do this, but there’s a very good chance more people you know use Facebook than Skype–the Facebook branding and built-in network of people could mean a boost for VoIP like it’s never seen before. The only downside might be that calling someone over Messenger doesn’t trigger your phone’s ringer–instead, it pops up with a notification, just like you’ve gotten an email or text message.

This also, critically, is a major step backwards for the wireless carriers like Verizon and AT&T, who have been wildly overcharging for voice service and text messaging for, well, pretty much ever. But if you can text by using data–like on iMessage, or BlackBerry Messenger, or GChat or Facebook Chat–and now make phone calls with Facebook? That’s a huge knock for the carriers, who could find themselves turning quickly into mere flat-rate data providers. The way you pay Verizon or Comcast or Time Warner for your home internet, that could well be the way you pay for your phone service in the near future. Who needs minutes?

Messenger is available in the App Store for iPhone now, for free. No word on an Android or Windows Phone version yet.