How Iran Censors The Internet [Infographic]

Information wants to be free. It takes a lot of moving parts to chain it down. 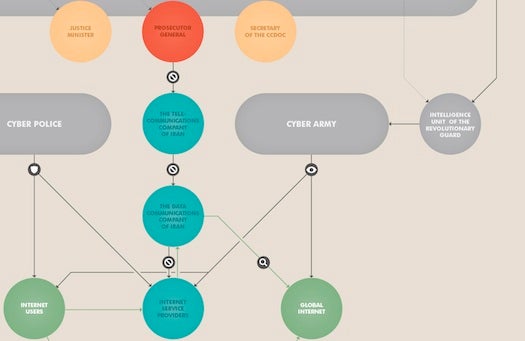 This infographic, from the Iran Media Program and the design studio Hyperakt, charts how far up the food chain internet censorship goes in Iran. It all starts at the very top, with the Supreme Leader, and makes its way down to internet users and service providers. In between, note the presence of some government entities, like the Cyber Police, which monitors social networks for anti-Islamic activity, and the Iranian Cyber Army, a coalition of pro-government hackers that launches cyberattacks against opposition groups. Clearly, a lot of thought goes into keeping people in the dark.

Despite all that policing, 20 to 30 percent of people in the country are using technology to get around the firewall–and are breaking the law to do it–the infographic says. That might change soon: Google Reader gives many Iranians access to blocked websites, because it runs through Google servers, which are located in parts of the world that do not censor the internet. But now that Reader is toast, people in the country who want unfettered access to the web will have to find another way. And the Iranian government has put tremendous manpower into stopping that from happening.