FYI: If I Did A Bag Of Lance Armstrong’s Blood, Could I Bike Up A Mountain?

No surprise: performance enhancers enhance performance. But they might not give me the instant mountain-scaling boost I want. 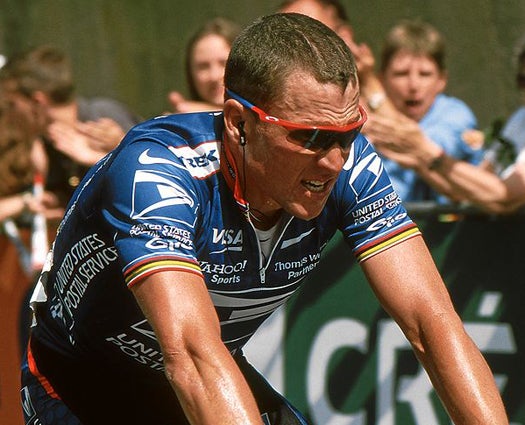 Hundreds of pages of fairly damning evidence came out against Lance Armstrong this week, accusing him of not only using performance enhancements but also of being “a bully” and developing “a culture of doping.” It all leads to an obvious question: What about me? If I got up from my desk and injected some high-octane Armstrong juice, could I, too, win the Tour de France?

No. But if I replicated his (alleged) process, I might be able to get up a mountain I couldn’t get up before.

Here’s a list of some stuff Armstrong is accused of doing–call it the Armstrong Cocktail. Let’s go down the list.

This is something of a catch-all term, says Don Catlin, a pharmacologist at the University of California, Los Angeles. Most of the time, people use it to describe a blood transfusion process that can improve athletic performance. The general idea is to take blood–either from yourself (an autologous transfusion) or–if you’re in mid-Tour, say–from another, compatible donor (a homologous transfusion). You then concentrate it to separate the red blood cells, and inject it before a race. (Armstrong is accused of using the autologous method.) Either way, the extra red blood cells can increase endurance quite a bit–according to one study, improving stamina up to 34 percent. Erythropoietin (EPO), which was also mentioned in the allegations, is another way of increasing the concentration of red blood cells in your blood. It’s a naturally occurring hormone, usually given to anemic patients, that can stimulate the body to create more red blood cells.

For men, standard hematocrit (the proportion of red cells to other stuff) is about 44 to 45 percent. Most testing regulations, Catlin says, dictate that competitors will be flagged if hematocrit is above 50 percent. So: “They aim for 49 and a half percent.”

Potentially, my stamina could increase 34 percent. That could make the climb up a hill a lot easier.

This is complicated. Conventional wisdom dictates that you won’t get anywhere taking testosterone or other steroids if you aren’t already training, but a few studies have come out contradicting that assessment, says Charles Yesalis, an emeritus professor of sports science at Pennsylvania State University. But either way, it’s going to be a much bigger increase for people who train regularly, or even semi-regularly, than for people who don’t. Similarly, women, who produce between one-tenth and one-fifteenth the testosterone of men, will see a much bigger increase in performance, Yesalis says.

Even for the regular person, there’s some variability in how you’ll react to steroids–it might be a huge increase for someone, and next to nothing for someone else. But even the low end could have “a profound effect,” Yesalis says. Catlin estimates that between a 5 and 15 percent improvement in cycling speed would be “expected,” although, again, that could go up or down depending on how the person reacts to the dope. (We don’t know exactly why, physiologically, people vary in their reactions, but Yesalis says there’s going to be some increase for anyone.)

Let’s take the low end: 5 percent. I’m just an average cyclist, after all. Still, that shaves quite a few hours off my completion of the 21-day Tour.

This one’s a no-go in some ways: Athletes use it, but this hormone, which makes it easier for competitors to increase muscle mass over the long term, hasn’t been definitively proven to increase strength or endurance. Although one study did find a four percent increase in sprinters’ performance, what’s more commonly reported that is that it decreases the recuperative time between training; that’s widely, if anecdotally, reported, Yesalis says. It’s tough to say how much that adds up to mathematically, but being able to train more could increase my performance, if I felt like training.

This is used as a way to mask pain caused by workouts, thereby letting a cyclist (or whoever) compete more efficiently. Generally, they’re a way to reduce inflammation in people experiencing pain, but they can give athletes a boost in the same way by letting them keep going–no pain, lots of gain. Hard to quantify, but I definitely plan on using plenty.

Same as above. Inconclusive.

This doesn’t directly give athletes any increase in performance; it’s more of a way to foil drug tests. When competitors are blood doping, sometimes they “overshoot,” Catlin says: The amount of red blood cells goes over that 50 percent mark (or whatever the mark is) and they’ll be sit out of competition. So, to balance out the equation, dopers will add saline or plasma to their system, bringing the proportion back down to acceptable (but still performance-enhancing) levels.

SO CAN I BIKE UP A MOUNTAIN YET?

Sure! Especially if I aim for a mountain that I can bike up already.

It’s hard to say exactly how these boosts “stack,” Yesalis says–that is, whether two percentage increases can be combined neatly or whether you have to factor them into a complicated curve. For the most part, these are small increases, which can make a lot of difference in a top-tier race that comes down to a second or, in longer races, the minute.

To get up that mountain, I’d need to be able to climb most of the mountain (80 or 90 percent maybe) without help. If there’s a mountain that’s your own personal white whale, that you’re within a few more pushes toward slaying, the Armstrong Cocktail could do it.

Remember, though, that it also depends on the person. A woman would get more out of the testosterone increases than a man; some people will see more improvement from steroid use in general; a regular cyclist who continues training while doping will see more of an improvement. Will I see a boost from this? Yes, probably. How much will it be? Not as much as Lance (allegedly) saw.

Conclusion? Probably not worth it. I am not going to transfuse my blood just yet.

Ask Us Anything
drugs
Sports