FYI: Why Does Salt Water Make Hurricane Damage So Much Worse?

The white stuff can stick around and ruin, well, pretty much everything. That puts the officials trying to fix it on a ticking clock. 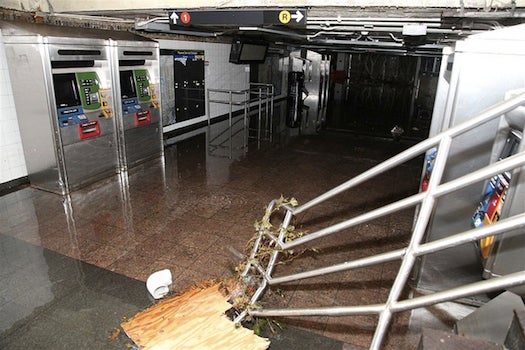 Sandy crippled the NYC subway system this week, knocking out power, damaging switches, and dumping gallons of storm water into the city’s aging tunnel infrastructure. Officials estimated that it would take several days for the subway to return to normal (some lines have already resumed service), and a 2011 study on similar disasters suggested it could take even longer, up to several months. A big part of the problem? Salt.

Unlike a rainstorm, a hurricane–or superstorm, which Sandy was demoted to–scoops up salt from oceans and estuaries the way a kid scoops up sand at a beach. The “brackish” water (salty but not extremely salty) and the saltwater (about 35 parts per million salt) get mixed up with freshwater and carried inland by the storm surge. When that water is pushed to shore, it can be more damaging than the salt-free version, especially if comes into contact with electronic equipment (as was the case with Sandy).

Why? Because salt can react badly with, well, just about everything, says Steven Apfelbaum, founder of the environmental consulting firm Applied Ecological Services, Inc. and author of Restoring Ecological Health to Your Land. Salt has chemical properties that make it react with, and alter the composition of, iron, steel, zinc, concrete, wire insulation, and more–nearly all the building blocks of the manmade environment. It not only corrodes wires that can transmit electricity, it also conducts a charge itself, which means that it can both wear away our safety insulations, causing outages, and increase the chance of an accidental shock. When coated with salt, metal can transfer a jolt, too.

In the short term, that means big safety problems. We’ve already seen power outages and extensive clean-up efforts–which were triggered, at least in part, by salt.

In the long term–maybe not even that long term; “weeks or months or years,” Apfelbaum says–it can mean serious, corrosive damage to infrastructure. “It basically breaks, starts decomposing, the molecular bonds,” Apfelbaum says. “Therefore streets and buildings and sidewalks and roads can be weakened.” Salt can be better than a jackhammer for taking out concrete: the chemical bonding in the usually tough concrete can be disrupted over time by sodium ions. That’s trouble for the enclosed subway, but also all over the city. Apfelbaum recalls an ecological study he did where a storm surge blasted saltwater from the coast to a quarter mile away.

It also makes cleanup more complicated. Usually, Apfelbaum says, fixing a flood might be as (relatively) simple as pumping out the water and detritus. But salt is a different beast. First you have to use freshwater to wash out the salt, before you can properly pump and inspect the water. And it’s all done on a ticking clock. “The risk there is the time,” he says. “If it takes weeks and weeks to get this done, the corrosiveness increases with time.” More conventional flooding–i.e. sans salt–can be handled internally, with built-in de-flooding provisions that keep every drizzle in the subway from turning into an all-out flood. But Nasri Munfah, chairman of tunnel services at infrastructure construction, design, and consulting firm HNTB Corp., says the storm was “way beyond anything that can be predicted.”

What’s more, any existing problem–like, say, an unfilled pothole–gets exacerbated by salt in the wound. The 108-year-old subway system, despite regular upkeep, has had plenty of time for issues like that to creep in.

And there’s no way to really be prepared for a saltwater surge, Munfah says; there’s no equipment that stops or slows it down especially well, and nothing keeps it out that wouldn’t have kept out rain water: “It does not exist.”

Without some sort of material–something that would “make salt go poof,” as Munfah puts it–the only way to prevent salt damage would be to overhaul the subway infrastructure so it could stay airtight. There are some ideas out there on what such an overhaul would look like, but it would cost a pretty penny; as much as several billion dollars could be spent to prevent flooding, while some smaller fixes, like raising ventilation grates, could be a lot cheaper. The cleanup from Sandy has already been costly, with some early predictions putting the economic losses at up to $10 billion a day. Though it’s impossible to say how much of that is a direct result of salt, rest assured that one of the biggest, baddest storms the East Coast has ever seen was made worse by some tiny flecks of white we dash over dinner.