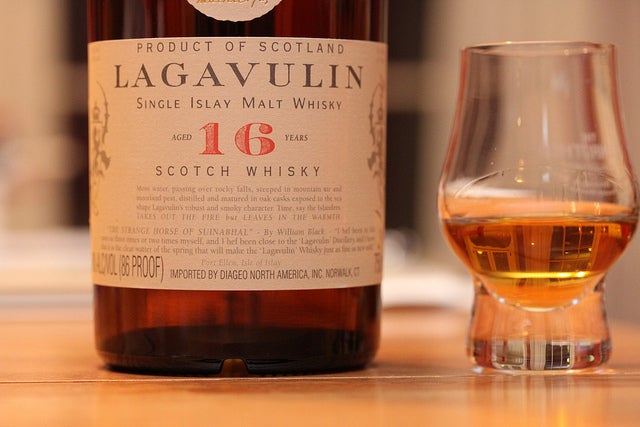 A friend of mine has type 1 diabetes, for which she injects a synthetic insulin called Humalog. When she does, there’s a quick but very powerful aroma of… Band-Aids. It’s weird. I never thought much of it, until the last time I had a peaty glass of scotch, a drink I’ve never particularly loved. As I took my first sip, I thought, as I always do, that it smelled like… the same Band-Aids. A quick poll of PopSci editors revealed that I wasn’t alone in associating the smell of scotch with non-food: others thought of Sharpies, hospitals, and wood stain.

Why would scotch, a drink beloved by many for centuries, remind people of things that are so thoroughly not delicious? As it turns out, the resemblance is not at all a coincidence.

One of scotch’s most recognizable flavors comes from a group of chemical compounds called phenols, a class of lightly acidic, naturally occurring (but often synthesized) compounds with the formula C6H5OH. Also known as carbolic acids, phenols are crystalline and white at room temperature, but dissolve very easily in water.

A sub-category of phenols called cresols–specifically ortho-cresol–is responsible for the flavor in scotch some would call medicinal. Cresols are very commonly used to dissolve other chemicals, which makes them very useful as disinfectants and deodorizers. The most famous? A little product called Lysol. (Interesting fact, from Wikipedia: “Lysol was also advertised as a disinfecting vaginal douche in mid-twentieth century America.” Let’s all be happy we’ve left those times behind.)

So how do they end up in scotch? They’re naturally present in peat, a partially decayed plant product often consisting mostly of mosses. Scotland is basically covered with the stuff. But it’s a lot more useful than the phrase “partially decayed plant product” sounds–if you compress it, you can squeeze out the water, which turns it into an incredibly efficient source of fuel for fires. And since Scotland has tons of it, and not very many trees, the country’s namesake whisky relies on its very particular smoky fires.

You can also find cresols in Sharpie markers, where they (along with a few other industrial solvents) help the Sharpie ink to bleed properly into all kinds of surfaces. Cresol is also found in creosote, a fairly toxic wood preservative, and, as suspected, is an ingredient in many diabetes medications like Humalog and Lantus, where it’s used as a preservative.

Another, similar kind of cresol, meta-cresol, is a common ingredient in antiseptics (though less now than they used to be–they’re sort of extremely poisonous and tend to get abandoned as soon as we find anything as effective), and is such a distinctive, astringent odor that many people, upon smelling it, simply think “medicinal.” It’s a common aroma in hospitals and drugstores, and its antiseptic properties have made it a traditional ingredient in…dum dum dum…Band-Aids. So when you insist to a Scotch lover that their favorite drink just smells like a box of bandages, rest assured that scientifically, you are correct.

For more on scotch, check out our surprisingly well-populated tagpage of scotch science stories.