FYI: Can a Bladder Actually Burst?

Only under special circumstances. “I mean, it doesn’t just happen to any Joe Schmo walking down the street holding his... 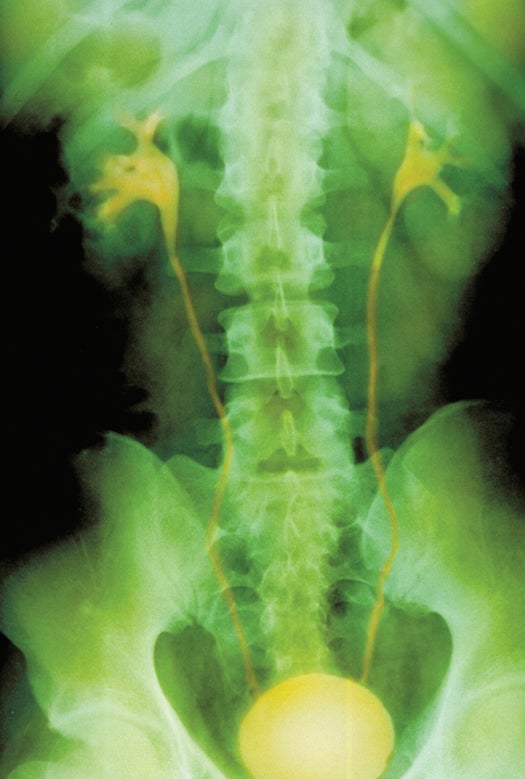 Color enhanced normal intravenous pyelogram (IVP), a x-ray which displays the drainage of urine from the kidneys through the ureters towards the bladder. Seen here are the kidneys, ureters, and rounded thick walled bladder in a 22 year old male. BIOPHOTO ASSOCIATES
SHARE

Only under special circumstances. “I mean, it doesn’t just happen to any Joe Schmo walking down the street holding his urine too long,” says Scott Eggener, a urologist at the University of Chicago. “But for someone who has had major surgery or cancer or had radiation in his bladder, or whose bladder had been removed and we make them a new bladder out of intestine, then yes—those are situations where the bladder can rupture.”

These situations can be extremely painful. When the bladder bursts, urine generally pours into the abdomen, sometimes requiring an emergency procedure in which surgeons drain the urine with catheters. But usually there’s little risk to holding one’s urine; people will typically pee accidentally before a bladder bursts.

Doctors caution against regularly avoiding urination, however. “People who don’t empty frequently enough may get bladder infections,” says Gerald Timm, a urological researcher at the University of Minnesota. “The bladder’s kind of like a pond. Not draining properly allows bacteria to build up, and that leads to infection.”

Ask Us Anything
june 2012
organs