Arturo Valdenegro, 12-year-old Tucson resident, made paper aviators everywhere look minuscule by comparison last week. In the skies over the... 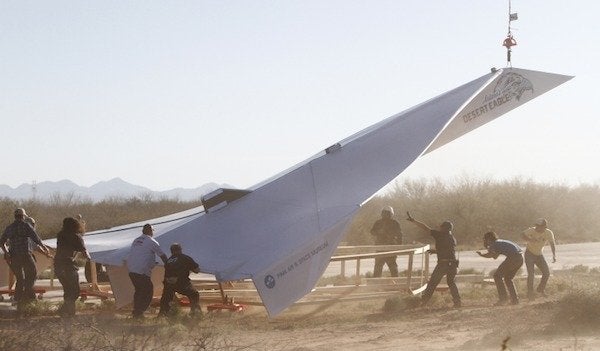 Arturo Valdenegro, 12-year-old Tucson resident, made paper aviators everywhere look minuscule by comparison last week. In the skies over the Sonora desert in Arizona, the Pima Air & Space Museum launched the biggest paper airplane ever constructed–a paper airplane based on Valdenegro’s design–into the sky, accelerating it to speeds topping 100 miles per hour before it came crashing down (as paper airplanes do).

The plane, aptly named Arturo’s Desert Eagle, weighed 800 pounds and stretched 45 feet long with a 24-foot wingspan. The museum constructed it out of falcon board, a kind of corrugated cardboard, as part of its Giant Paper Airplane Project, the goal of which is to generate interest in aviation and engineering among young people.

Arturo designed and folded his plane for the competition, winning top honors in a fly-off sponsored by the Pima museum. But for last week’s flight, his design was adopted and constructed by Art Thompson, one of the designers of the B-2 stealth bomber.

The idea was initially to tow Arturo’s Desert Eagle up to roughly 5,000 feet and let it fly, but the pilot of the Sikorsky S58T helicopter that was doing the towing decided that the wind conditions wouldn’t allow it. The tether was cut at about 2,700 feet, which was still plenty high to allow the giant paper plane to glide for about ten seconds, hitting speeds of 100 miles per hour before tail stress brought it crashing to the ground. For his part, Valdenegro told the museum that he’s now convinced that a career in engineering is the right move for him when he gets older. Given the video below, his resume already looks pretty solid.