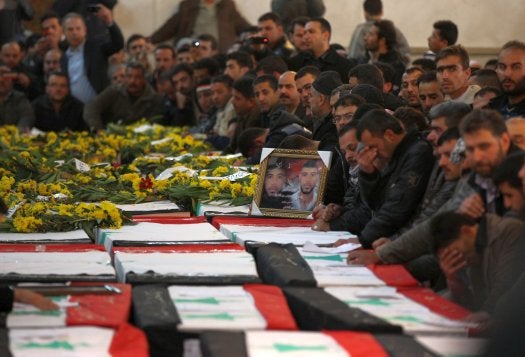 It’s been nearly a year since the beginning of a bloody uprising in Syria that has taken thousands of lives, both military and civilian. Just how many? Depends on whom you ask.

A trustworthy death toll is needed, to place the conflict in context, and document the crisis for present and future reckoning. But accounting for the dead has been difficult, due to a lock-tight government crackdown, ongoing violence and even political ideology. A collection of volunteer groups is trying to bring clarity to the conflict, however. By combining social media and crowdsourced data with automation and algorithms, Syrian casualty trackers are moving toward the realm of activist data mining.

Volunteers are developing algorithms to search news articles and using open-source software to map victims’ deaths, and Syrian rebels are learning how to shoot and upload high-quality video, sharing it via social media and unpublished YouTube links. The goal is to ensure the war — and its thousands of victims — are chronicled for the rest of the world to see.

Daily headlines about the conflict show a confusing jumble of numbers: More than 9,000 dead since the conflict began last April, the United Nations says; 3,000 soldiers killed, according to Syria’s leadership; and either 16 or 31 killed on
Thursday alone, depending on the opposition group whose reports you believe. Opposition groups frequently report vastly different figures, although most agree everyone’s numbers are too low.

“You have multiple organizations trying to document the deaths, and each organization has its own citizen journalists and reporters,” explains Rafif Jouejati, English spokesperson for the Local Coordination Committees in Syria. “It really depends how many people you have on the ground to document and witness.”

The victims of Syria’s civil war depicted in graphical form. Several volunteer groups are mining death data to search for trends and to chronicle the conflict.

The work is further complicated by ideological perspective. Bashar Assad’s besieged government calls the uprising the work of “terrorists,” and says rebels have killed thousands of soldiers — just Thursday, two army colonels were killed in the city of Aleppo while on their way to work, according to the state news agency. But the government has banned access by international media and does not typically comment on clashes between the rebels and military forces. Meanwhile, the country’s opposition groups — many of which are arguing for peaceful protests, but others which are not — aren’t as quick to report deaths of pro-government officials or soldiers.

The website Syria Tracker, run by a collective of U.S.-based Syrians, has been gathering and cataloging reports from both sides since April 23, 2011, a few weeks after the first peaceful protests that sparked a brutal crackdown by police forces.

“If you turn on CNN, you hear, ‘Two people have died. Oh no, it’s seven. No, it was 80.’ And if you get on Facebook and Twitter, there’s a lot of emotion. People are trying to play with your head,” said one member of the group, who declined to give his name for fear of reprisals against relatives in Syria. “You really cannot distinguish noise from signals. We didn’t want to do that; we didn’t want to contribute to the noise.”

Syria Tracker works in two ways. First is through a custom-designed algorithm based on the HealthMap platform, designed at Children’s Hospital Boston, which mines online sources and news for disease detection. This version scours thousands of articles from around the world in Arabic and English to track reports of civilian and military deaths.

The second method is similar to the LCC’s, in which clusters of volunteers file reports and video logs documenting violence and deaths. The Syria Tracker team asks volunteers not to use text messages, but to use the hashtag #basharcrimes on Twitter and to file videos to YouTube. The combination of automated data mining and crowdsourcing is novel in the crisis-tracking field, said Patrick Meier, director of Crisis Mapping at Ushahidi, which developed the mapping technology Syria Tracker uses.

Here’s what it looks like. Important: The numbers represent reports, not the number of deaths. As of Wednesday, there were 11,813 documented casualties.

Like the LCC, Syria Tracker checks with eyewitnesses and family members to verify these reports. Eighty-eight percent of these have at least one video associated with them, and there’s plenty of other data, including dates of birth, age, gender, manner and place of death, and more. You can even download the information as a .kml file and upload it into Google Earth.

The statistics paint a rich portrait of the victims, preserving their places in history and in potential evidence, the Syria Tracker member said.

“You can go back historically from the beginning of the events, and replay everything,” he said.

The tracker member said the on-the-ground reports are impressive in their scope and quality. “I am so proud of these Syrians, with their iPhones or their cameras. The quality is getting better, and the verification is getting better,” he said. “There is a lot of effort on their part to say, ‘This is real.’ Earlier, it might have been low quality. Now you are getting 780p video.”

Government leaders have tried to argue these video reports of civilian deaths are faked in an Al Jazeera studio, a claim that rankles Jouejati. Wednesday night, an activist was hiding beneath a car to capture columns of smoke rising from a besieged city. He was shot while filming, she said. To counter hoax allegations, videographers now film easily recognizable landmarks to identify a city, insert time and date stamps, and corroborate the video’s authenticity with other eyewitnesses, she said.

“People are putting their lives literally on the line, to make sure the evidence gets out,” she said.

Meier believes the videos and other data-rich reports could become valuable evidence indeed — it could “serve to inform transitional justice post conflict,” he said in an email.

As if to punctuate his point, Syria Tracker has been hacked several times and the LCC was hacked this week, forcing a temporary shutdown while installing new servers for its Violations Documenting Center, Jouejati said.

She said information about the victims can frame the conflict and help the international community grasp what is happening in Syria. But no one should ever forget the people behind the data, she said.

“Every victim has a name, and a family. They had actual lives,” she said. “They’re not just numbers. They’re real people.”