Sometime soon, when you spot a pothole in the street, you won’t have to swerve around it and curse when... 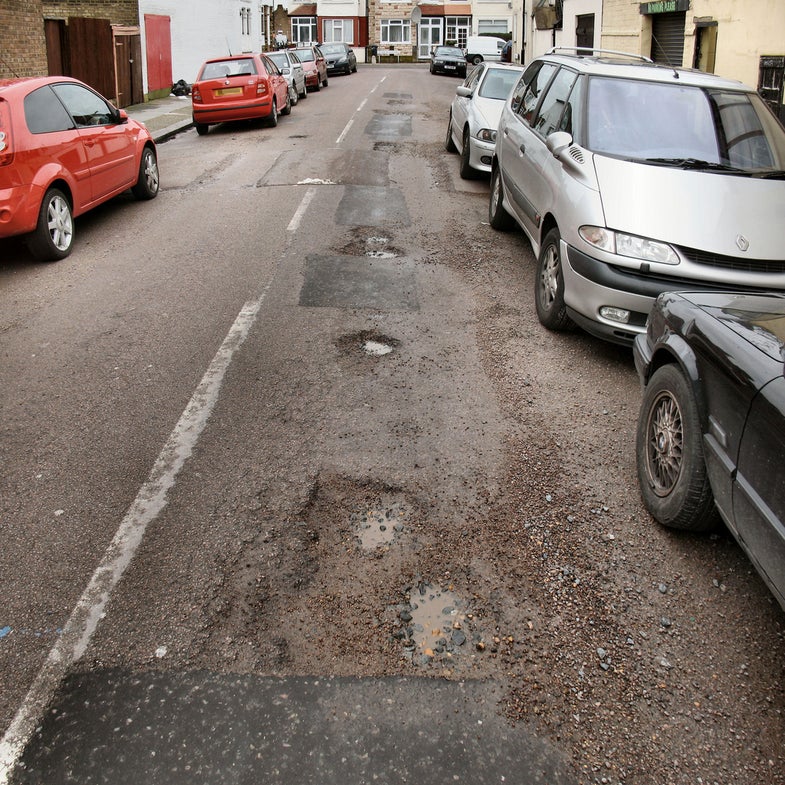 Sometime soon, when you spot a pothole in the street, you won’t have to swerve around it and curse when your wheel dips in. Instead, you would deliberately drive over it, so the pressure of your car tires will stiffen the little plastic baggie the city dropped in there as a temporary fix. A little non-Newtonian fluid pothole filler could spare your wheel alignment after a harsh winter, saving municipal money and traveler troubles.

Non-Newtonian fluids are those that ooze in some conditions and stiffen in others as they respond to forces applied to them. Newtonian fluids, by contrast, act like fluids no matter what’s done to them. The classic mixture of cornstarch and water is one example of a non-Newtonian fluid. A group of students at Case Western Reserve University in Cleveland decided to use these mixtures as pothole fillers, as part of a contest by the French materials company Saint-Gobain, according to ScienceNow.

Here’s how it could work: Instead of driving around with a mixture of hot asphalt, road-repair crews or even police cars would carry plastic bags full of a water-powder mix. The students plan to patent their idea, so they haven’t divulged their recipe, but they say it’s biodegradable and even edible. When a city worker comes upon a pothole, he or she would drop a baggie into the hole, and then cover it up with black tape so a driver wouldn’t mistake it for an obstacle. When a car drives over it, the fluid behaves like a solid — voila, a filled pothole.

The students have already road-tested their plastic bag trick and say it holds up well, even after a week of continuous use. They are meant to be sturdy enough to last weeks at a time, even in wet and salty-road conditions, until pockmarked roads can be properly filled and smoothed over, the team said. The city of East Cleveland plans to help with further testing, ScienceNow said.