A Wirelessly Controlled Pharmacy Dispenses Drugs From Within Your Abdomen

Future pharmacies will be inside our bodies 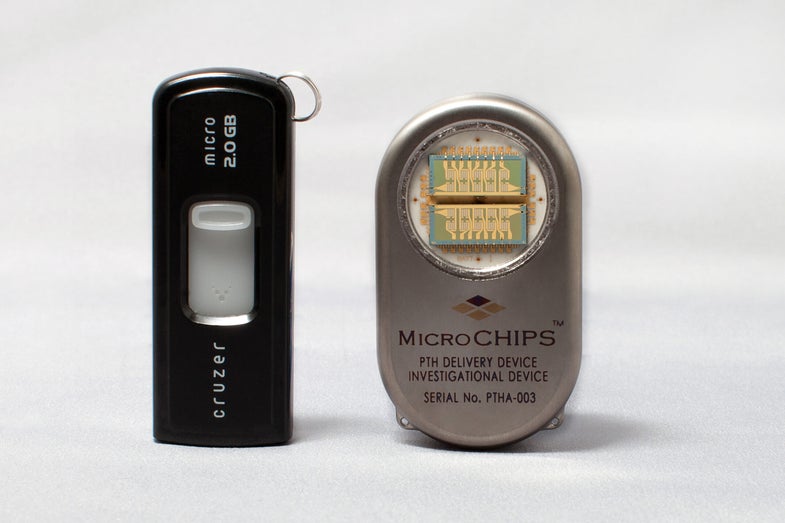 In the future, implantable computerized dispensaries will replace trips to the pharmacy or doctor’s office, automatically leaching drugs into the blood from medical devices embedded in our bodies. These small wireless chips promise to reduce pain and inconvenience, and they’ll ensure that patients get exactly the amount of drugs they need, all at the push of a button.

In a new study involving women with osteoporosis, a wirelessly controlled implantable microchip successfully delivered a daily drug regimen, working just as well, if not better, than a daily injection. It could be an elegant solution for countless people on long-term prescription medicines, researchers say. Patients won’t have to remember to take their medicine, and doctors will be able to adjust doses with a simple phone call or computer command.

Pharmacies-on-a-chip could someday dispense a whole suite of drugs, at pre-programmed doses and at specific times, said Robert Langer, the Institute Professor at the David H. Koch Institute for Integrative Cancer Research at MIT, who is a co-author on the study.

“It really depends on how potent the drugs are,” he said. “There are a number of drugs for things like multiple sclerosis, cancer, and some vaccines that would be potent enough.”

Langer and fellow MIT professor Michael Cima developed an early version of an implantable drug-delivery chip in the late 1990s. They co-founded a company called MicroCHIPS Inc., which administered the study being published today in Science Translational Medicine. The team decided to work with osteoporosis patients because the disease, and the drug used to treat it, presented a series of special opportunities, Langer said. A widely used drug called teriparatide can reverse bone loss in people with severe osteoporosis, but it requires a daily injection to work properly. This means up to 75 percent of patients give up on the therapy, Langer said. It’s also a very potent drug that requires microgram doses, making it an ideal candidate for a long-term dispensary implant.

Getting the chips to work well required some tinkering on the part of the company, including the addition of a hermetic seal and drug-release system that can work in living tissue. The chip contains a cluster of tiny wells, about the size of a pinprick, which store the drug. Each well is sealed with an ultrathin layer of platinum and titanium, Langer said. At programmed times or at the patient’s command, an external radio-frequency device sends a signal to the chip, which applies a voltage to the metal film, melting it and releasing the drug. The wells melt one at a time.

“It’s like blowing a fuse, the way we’ve got it set,” Langer said. He said the amount of metal is near nanoscale levels and is not toxic.

The team also had to ensure the chips were secure and could not be hacked. The chips communicate via a special frequency called the Medical Implant Communications Service band, approved by both the FCC and the FDA. A bidirectional communications link between the chip and a receiver enables the upload of implant status information, including confirmation of dose delivery and battery life. A patient or doctor would then enter a special code to administer or change the dose, Langer said.

The research team recruited seven women in Denmark who had severe osteoporosis and surgically implanted the chips into their abdomens in January 2011. The chips stored 20 doses of the drug. The patients had the implants for a year, and they proved extremely popular, Langer said. “They didn’t think about the fact that they had it, since they didn’t have to have injections,” he said.

Ultimately, the device delivered dosages comparable to daily injections, and there were no negative side effects. There was no skipping the shot if a patient didn’t feel like visiting the doctor — complying with a prescription is of key importance, said Cima, the David H. Koch Professor of Engineering at MIT. “This avoids the compliance issue completely, and points to a future where you have fully automated drug regimens,” he said.

The study points out one interesting phenomenon that will inform future research and development on these types of implants. When you implant a device into a person’s body, the body forms a fibrous, collagen-based membrane that surrounds the foreign device. This can affect how well drugs can move from the device and into the body, which in turn affects dosage requirements and pharmaceutical potency. One of the aims of this study was to examine the effects of that collagen membrane, and the researchers found it did not have any deleterious effects on the drug.

Now that these chips have been proven to work, Langer and the others want to test them with other drugs and for longer dosage periods, he said. Because the well caps melt one at a time, the chips could be used to deliver different types of drugs, even those that would normally interact with each other if taken in shot or pill form, he said. The team wants to build a version with 365 doses to see how well it works.

It could even be used as a long-term sensing device, he said, an interesting possibility of its own. Medical sensing implants can degrade once they’re in the body, so implants that could check for things like blood sugar or cancer antibodies can lose their effectiveness. But a chip with multiple sensors can work a lot longer — once a sensor is befouled, simply melt another well and expose a fresh one, Langer said.

The ultimate goal is to create a chip that could combine sensing and drug delivery — an implantable diagnostic machine that can deliver its own therapy.

“Someday it would be great to combine everything, but that will obviously take longer,” Langer said. 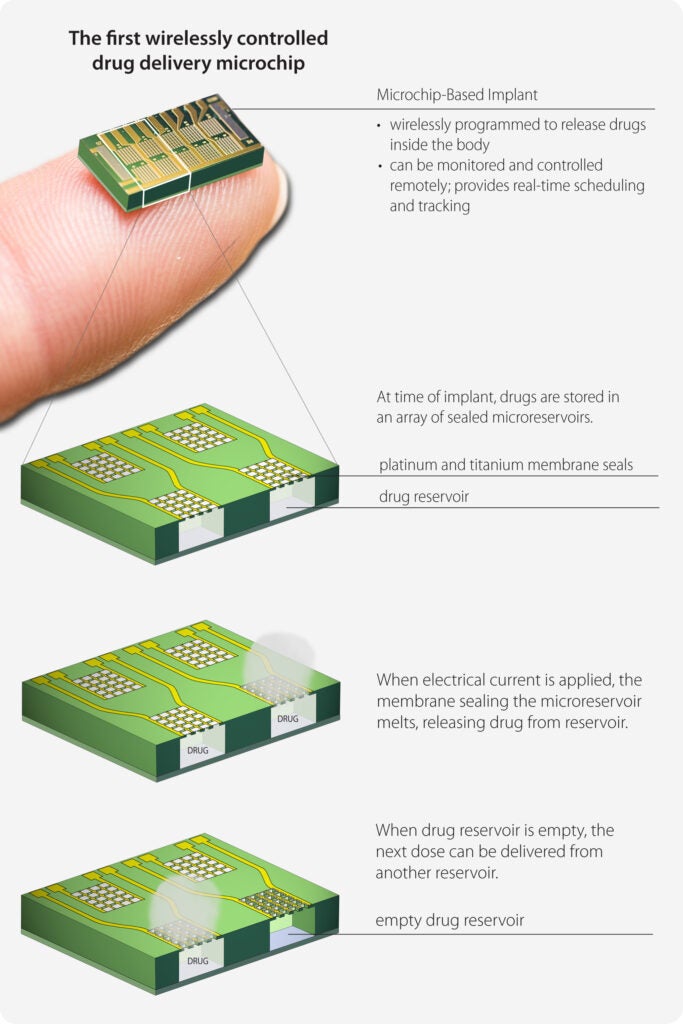