Microrockets Can Zip Around the Human Stomach, Powered by Hydrogen Bubbles

Tiny machines that can enter our bloodstreams and do work inside of our bodies are a staple of both science... 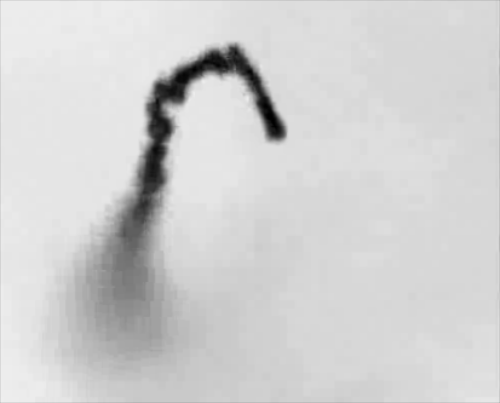 Tiny machines that can enter our bloodstreams and do work inside of our bodies are a staple of both science fiction and real-world biomedical science, as MEMS and other micromotor devices become increasingly small and effective. A team from the University of California, San Diego, is taking the idea even further by creating what it is calling “microrockets”: tiny self-propelled motors that can zip around an acidic environment, like the human stomach, without the need for any external fuel.

The microrockets are the first known example of a chemically-powered micro-machine that powers itself without carrying some kind of fuel, like hydrogen peroxide, onboard. Rather, the UCSD team’s microrockets are powered by hydrogen bubbles produced by a reaction between an acidic solution–like that present in the stomach–and the zinc that the microrocket itself is made of.

When the microrocket is immersed in that acidic environment, hydrogen bubbles quickly start to build up inside the rocket and–depending on how acidic the environment–propel it up to speeds of 100 body lengths per second. That’s about 1,050 micrometers per second for a 5-micrometer diameter microrocket (they are generally about 10 micrometers long, and between two and five micrometers in diameter). Depending on the rate of zinc dissolution, the lifetime of the microrockets once introduced to the acid solution can be anywhere from two to 10 minutes.

The biomedical applications here are pretty obvious. Aside from being able to do rudimentary pH sensing in the stomach, such microrockets could be used to non-invasively target drugs within the body–at least in the acidic parts–or to assist in imaging of certain parts of the body. They could also be used in industrial processes like semiconductor processing.