How It Works: A Laser-Powered Ear Implant to Boost Hearing 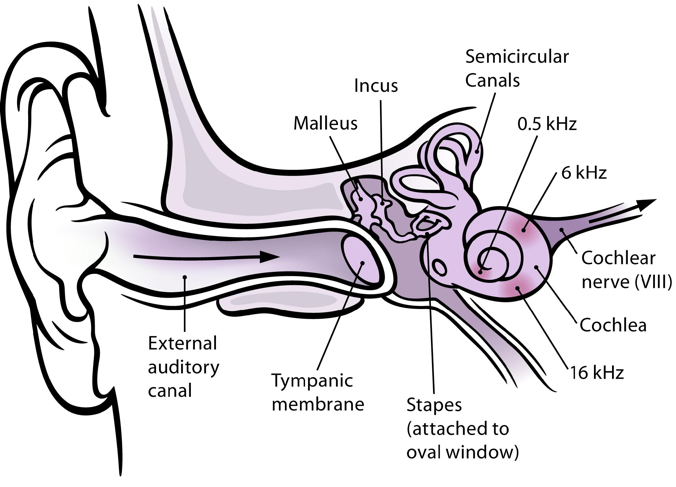 Hearing loss from weapons and explosive devices has been the No. 1 disability in this country’s modern military conflicts, saddling thousands of veterans with anything from tinnitus to deafness. Now a new generation of laser-based implants promises to restore their hearing — and that of civilians, too — with higher resolution than existing technology.

Rather than stimulating inner ear auditory cells with electricity, or modifying them to respond to light directly, new laser-based cochlear implants will stimulate cells with heat. Here’s how it works.

Cochlear implants are widely available, albeit very expensive, but they can only restore very little of a person’s hearing. Current models can produce four to eight frequencies of sound, by stimulating nerves in the cochlea — the snail-shaped part of the inner ear — with a set of electrodes. Click here to hear what it sounds like. Eight is not enough, explains Mark Bendett of Lockheed Martin Aculight, which is developing the laser-based technology.

“The greater the frequencies, the more independent sounds you can create,” he said. “Current technology would be like having four to eight notes on a piano keyboard, but we could do as many keys as you like — 88 keys on a piano if you want. Then it is much easier to reproduce Mozart.”

“We humans are wet, salty beasts.”A typical cochlear implant consists of four key parts: A microphone attached to the ear, a speech processor worn behind the ear, a transmitter that provides electrical stimulation, and a surgically implanted array of electrodes, attached to the auditory nerve. The electrodes take the place of damaged cilia, which are tiny hairs inside the cochlea that vibrate in response to sound waves. These vibrating structures would normally trigger a response in the auditory nerve. Artificial electrical impulses can only do so much, which is one reason implants are limited to a few channels, Bendett said.

“We humans are wet, salty beasts, and we tend to conduct electricity pretty well. It not only goes where you want it to go, but also out into the surrounding tissues,” Bendett explained. “Sometimes this is good, for instance in heart pacemakers, but in sensory restoration, the more accurately you can stimulate the nerve, the more accurately you can reproduce the sound.”

Laser precision would be one way to do that. Several research teams have been working on this, not the least of which is DARPA, which has studied optogenetics for light manipulation of the brain. DARPA is interested in optogenetics for treatment of traumatic brain injuries, which affect as many as 20 percent of warfighters returning from conflict in the Middle East.

That method is a bit different, because it requires modifying cells with chemicals or viruses so they respond to light. But last spring, researchers at the University of Utah announced a breakthrough using infrared light to control cells — although no one was sure exactly how it worked. Researchers from Vanderbilt and Northwestern universities have also worked on the technique. Last month, scientists from the University of Chicago and Northwestern University figured out how this process works.

The researchers, reporting their work in Nature Communications, stimulated frog eggs and mammalian cells and showed that infrared light induces electrical currents. The pulses of infrared light change the capacitance of the nerve cell membrane in a unique way, according to the paper, by Chicago biologist Mikhail G. Shapiro and colleagues. Infrared pulses are absorbed by water, which produces a rapid increase in temperature within the cell. This depolarizes the cell, opening a channel for sodium and calcium ions — creating a normal action potential, just like a nerve is supposed to transmit signals.

“It triggers the nerve to behave like a nerve,” Bendett said. 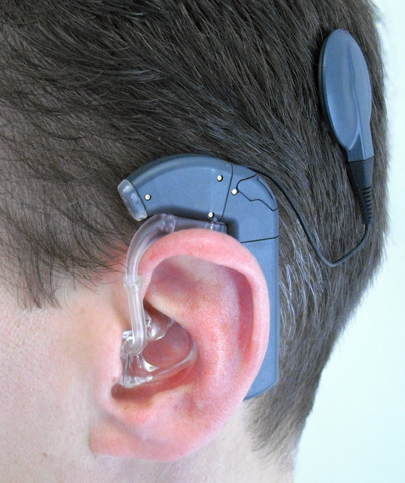 A cochlear implant typically consists of an external audio processor and transmitter, attached to the patient’s head with a magnet.

Building on this study and others, Aculight is now working on an infrared laser-based cochlear implant. The packaging would likely be very similar to existing implants, using the same batteries, microphones and signal processors, Bendett said. Instead of an implant with a few metallic electrode pads, the implant will contain a small strip of infrared-range lasers. An alternative design would use optical wave guides inside the ear, rather than implanting a laser directly, he added — the wave guides would direct and distribute infrared pulses to the appropriate areas.

Beyond cochlear implants, this type of nerve stimulation could also be used for pacemakers; pain management; epilepsy; reduction of symptoms in neurological diseases like Parkinson’s; and even prosthetic limbs. But hearing restoration was one clear application right away, Bendett said: “There is such a need for addressing such a large population, that it was the one that got the most attention and collaborators,” he said. Aculight is also working with scientists at Vanderbilt University and the U.S. Army.

Still, light-induced nerve impulses could potentially provide sensory feedback for a wide range of potential applications, he said. “We are one arrow in the quiver of the neurologist of the future.”