Steer Your Wheelchair With Your Computerized Tongue Piercing

Today in non-cosmetic body piercings: A group of engineers at the Georgia Institute of Technology have created a way to... 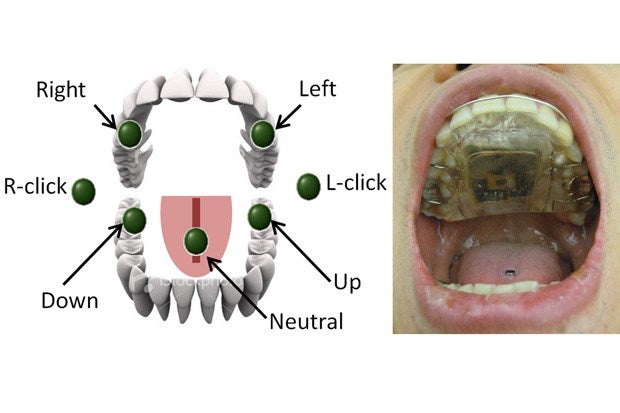 Today in non-cosmetic body piercings: A group of engineers at the Georgia Institute of Technology have created a way to control, well, just about anything (but most likely, things like wheelchairs) with a combination of a magnetic tongue piercing and a paired retainer. The user would press the tongue piercing against different parts of the retainer to send signals. Shift into neutral! Pretend like you’re saying the word “lilt”!

The system is called the Tongue Drive, and it relies on a waterproof retainer on the roof of the mouth containing a Li-ion battery, induction coil for charging, and and several magnetic contact points to detect the position of the tongue-mounted magnet. It’ll then beam the signal wirelessly to a mobile device–iOS devices like the iPhone and iPod Touch are mentioned–and the mobile device shoots those commands over to whichever device is meant to be controlled. Theoretically you could use the Tongue Drive for just about anything, but the engineers are specifically looking to replace what’s called the “sip-n-puff” system for controlling wheelchairs, sort of like blowing into a straw. The Tongue Drive part of a new crop of wheelchair controls that are far more customizable than before. It’s a pretty interesting field–read more about them here.