A sheriff’s office outside of Houston is taking a big and potentially controversial step forward with a new piece of... 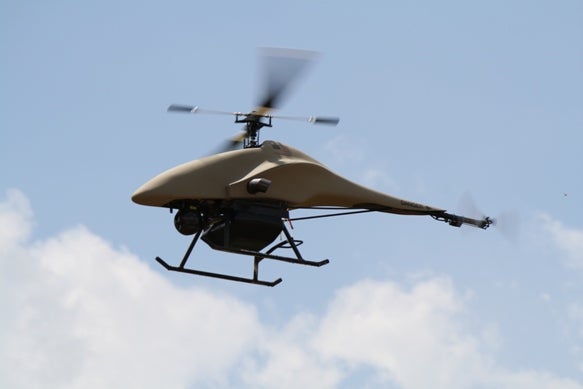 A sheriff’s office outside of Houston is taking a big and potentially controversial step forward with a new piece of law enforcement technology. The Montgomery County Sheriff’s Office in Conroe, Texas, is prepping its deputies to fly a $300,000 unmanned ShadowHawk helicopter –paid for with a Department of Homeland Security grant–that someday might carry a weapons payload.

This wouldn’t mark the first time a law enforcement agency has put a drone in the air, but the potential for carrying anything besides a surveillance payload is unprecedented as far as we’ve heard. There won’t be any Hellfire missiles here, but ShadowHawk–built locally by a company called Vanguard Defense Industries–is designed to carry a range of less-lethal payloads, including Taser-esque weapons that deliver an electric charge or a firearm that fires beanbag rounds known as stun batons.

Naturally, the very idea of this is fraught with controversies. Some local politicians and citizens are worried about invasions of privacy, while others are concerned that the drone will be put to use catching speed limit violators, an idea that caused some controversy in the Houston area back in 2007 (the idea was later scrapped).

Sheriff Tommy Gage told local media in Houston that his department’s ShadowHawk would only be deployed in emergency circumstances (like a hunt for a missing person) or in situations where sheriff’s deputies know they are dealing with law breakers, such as when police are actively pursuing suspects on the ground or in hostage situations. It could also be deployed to aid area firefighters in wildfire situations (nearby Bastrop was ablaze for several days this summer, and wildfires have become an increasing problem in Texas in recent years).

But weaponized law enforcement drones? Even loaded with a non-lethal payload the Montgomery Country Sheriff’s Department is dipping its toes in uncharted waters. Texas perhaps has a reputation for dealing unsympathetically with lawbreakers, but Texans are also fiercely protective of their civil liberties. There no telling how this one will shake out, but if Montgomery County can make a success of its drone deployment this could mark the beginning of a larger trend in law enforcement and a larger, more hands-on role for robotics.