NASA Awards the Largest Prize in Aviation History to an All-Electric, Super-Efficient Aircraft

NASA has awarded the single largest prize handed down in aviation history to Team Pipistrel-USA.com for designing and demonstrating its... 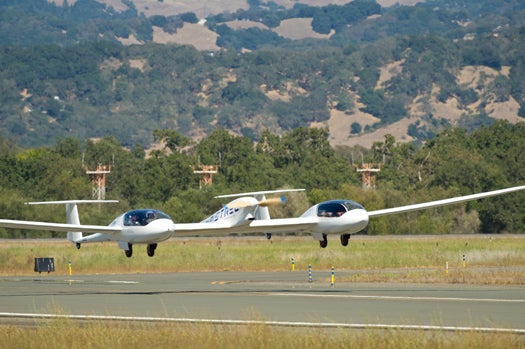 The Pipistrel-USA, Taurus G4 aircraft takes off during the 2011 Green Flight Challenge, sponsored by Google, at the Charles M. Schulz Sonoma County Airport in Santa Rosa, Calif. on Monday, Sept. 26, 2011. NASA and the Comparative Aircraft Flight Efficiency (CAFE) Foundation are having the challenge with the goal to advance technologies in fuel efficiency and reduced emissions with cleaner renewable fuels and electric aircraft. Photo Credit: (NASA/Bill Ingalls). NASA/Bill Ingalls
SHARE

NASA has awarded the single largest prize handed down in aviation history to Team Pipistrel-USA.com for designing and demonstrating its Taurus G4 electric aircraft. Per the rules of the NASA- and Google-sponsored CAFE Green Flight Challenge, Pipistrel’s Taurus G4 covered 200 miles in less than 2 hours and did so on the electricity equivalent of less than one gallon of fuel per passenger, scoring $1.35 million for the effort.

But the cash, substantial though it may be, is only part of the story here. The CAFE (that’s Comparative Aircraft Flight Efficiency) Challenge was created to push aircraft engineers toward new, more efficient airplane designs that would perhaps usher in a new era of ultra-efficient flight, based on either electric engines or extremely efficient fuel-burning engines.

So while you can argue the day belongs to Pipistrel–and we certainly don’t mean to diminish that achievement–the CAFE Foundation and NASA are the real winners here. Consider: The challenge asked teams to average 100 miles per hour over two hours, and to do so on the equivalent of one gallon of gas. Not only did Pipistrel manage this, but so did California-based e-Genius with its electric-powered plane (for which it netted a second place prize of $120,000).

The kicker: both teams did so on just a little more than a half-gallon of fuel equivalent. That means both Pipistrel and e-Genius did twice as well as NASA and CAFE asked them to do (and Pipistrel slightly better than e-Genius, hence the distribution of prizes).

That’s pretty amazing, considering that just a few years ago engineers were still trying to figure out how to get an all-electric powered plane into the air for any considerable length of time, much less at sustained triple-digit speeds and while using very little energy.

Our jetliners aren’t going green just yet of course. But the winning teams in the CAFE Green FLight Challenge collectively spent just two years and $4 million on two aircraft that have pushed the electric airplane field forward by a considerable step. Imagine what ten years and some serious investment might do for the electric aircraft space.

More background/details on Team Pipistrel-USA.com’s winning Taurus G4 in the video below.