Video: An Augmented-Reality Bananaphone, With a Real Banana (or Anything Else)

Researchers at the Ishikawa-Oku lab at the University of Tokyo have gone one-up on augmented reality with a system they... 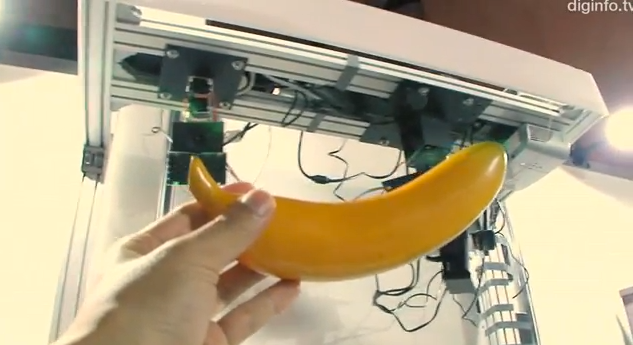 Researchers at the Ishikawa-Oku lab at the University of Tokyo have gone one-up on augmented reality with a system they call “invoked computing.” Basically, that means computers will be embedded everywhere in your daily life, and you’ll “invoke” operations, so everyday, non-computerized objects–like a banana–can be given computer-like capabilities. This is all leading up to a real-life bananaphone, obviously.

The concept of invoked computing is one we’ve heard before, and seen in some concept videos, notably in Microsoft’s latest “this is the future” video. The idea is that computers as we know them–distinct screens in specific places–won’t really exist. Instead, everything around us will be imbued with computerizing: walls, appliances, tables, floors, furniture.

Invoked computing, a term I haven’t seen before, seems to refer to the ability to give, through targeted audio/video movement, electronic attributes to non-computerized objects through intuition. This demo has the demonstrator pick up a banana and hold it to his ear like a phone. The embedded systems in the room see what he’s trying to do, and blasts a narrow beam of sound at his ear with a parametric speaker, so it seems as if the banana works like a phone. Of course, at that point, there isn’t really a need for an object at all, but it’s pretty amazing that the system could figure out what was needed and provide it.