It’s a kind of validation when our past visions of the future and the present collide, reminding us that things... 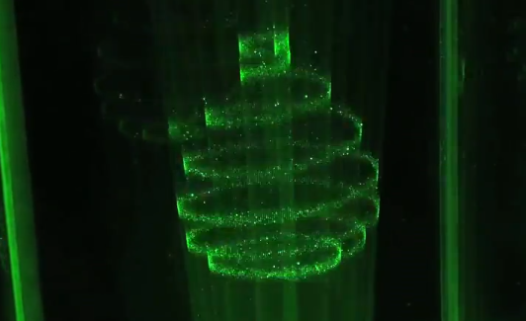 It’s a kind of validation when our past visions of the future and the present collide, reminding us that things we thought were possible back then actually were within reach. Take, for example, Tokyo-based Burton’s Aerial 3D technology. The company claims it’s the first 3-D tech that casts three-dimensional objects in mid-air without using any kind of screen. It recalls that scene in Star Wars where the crustacean-faced guy is planning the rebel battleplan around his big holographic table. And it’s here today.

Rather than using a screen to generate the illusion of three dimensions, Aerial 3D is a laser system that uses beams of light projected from below to generate plasma excitation in atoms of oxygen and nitrogen in the air. It currently can create 50,000 points of light per second, giving it a somewhat choppy frame rate of 10-15 fps. Burton is working to improve that to 24-30 fps, comparable to that of basic video.

The result of all of this is a floating, 3-D image that can be viewed naturally in 360 degrees. It’s not quite the Death Star wrecking tech of our sci-fi visions just yet, but if the video below is any indication it’s well on its way.