As the world goes increasingly wireless, we’ve learned to tolerate a certain degree of failure in our wireless systems–like when... 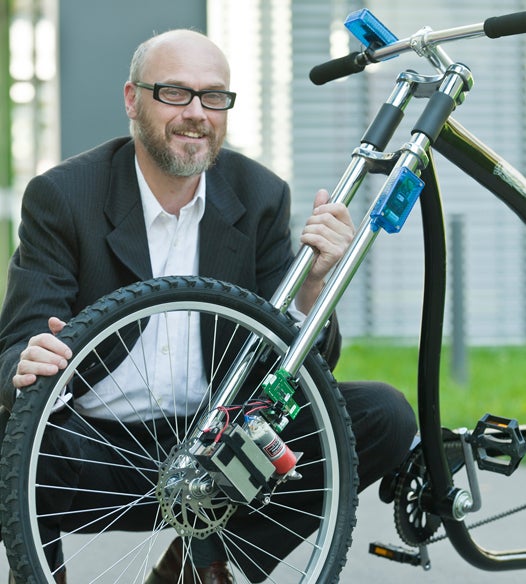 As the world goes increasingly wireless, we’ve learned to tolerate a certain degree of failure in our wireless systems–like when your computer just won’t sync up with the wireless internet at the cafe, or when our phones drop a call. But what about situations when wireless systems simply cannot fail? A failure rate of zero is tough to achieve in any system, but computer scientists at Saarland University in Germany have demonstrated a wireless bicycle brake that works 99.999999999997 percent of the time.

That means in a trillion braking attempts, it fails three times on average. It’s not perfect, mathematically speaking, but for practical purposes it’s pretty close.

The brake isn’t the usual handlebar brake lever customary on most bikes, and because it is wireless it naturally dispenses with the usual brake cable snaking down the frame of the bicycle to the front or rear wheel. To brake with the wireless system, the rider simply squeezes the rubber grip on the handlebar, which is fitted with pressure sensors. The harder the rider grips, the more pressure is applied to the front wheel brake. The signal sender is about the size of a cigarette pack and fixed to the handlebar. The receiver sits at the end of the bicycles fork and turns wireless radio signals from the grip into mechanical pressure on the front wheel.

That all sounds simple enough for a wireless bicycle brake, but the idea is to create a testbed for wireless technologies that absolutely cannot fail, like those envisioned for future train systems or for commercial jetliners. Starting with a simple handbrake, the Saarland team hopes to build the complex technologies necessary to ensure safety in wireless systems.