In Washington, D.C., where there are plenty of powerful people and precious places to protect, the cops have lots of... 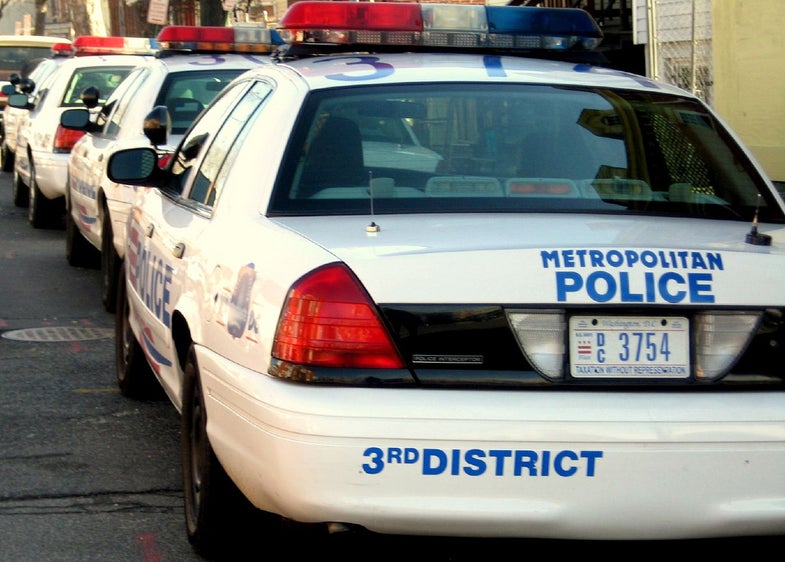 In Washington, D.C., where there are plenty of powerful people and precious places to protect, the cops have lots of high-tech tools at their disposal. But one tool, automatic license plate readers, could become much more than a crime-prevention device. D.C. police maintain the country’s densest network of plate readers, and keep a three-year database of license plate locations — meaning they can track where everyone’s car is, all the time, whether at the grocery store, an ammunition shop or Planned Parenthood.

This can be useful in catching criminals, as a Washington Post feature on the subject points out. In a murder case scheduled for trial last year, police used the plate readers to quickly track down the suspect, after a witness wrote down his license plate number. But what about other uses? The database can track the entirety of private citizens’ comings and goings, something that’s not always the government’s business. And what about third parties, who could potentially access the database? A conversation about these possibilities is still sorely lacking, as the Post points out.

The system includes more than 250 cameras in DC and its suburbs, which capture 1,800 images a minute and download them into an archive, the Post reports. It has more than one license plate reader per square mile, as the American Civil Liberties Union points out. The District keeps the images for three years, much longer than most suburbs, which range from two years to a couple months.

“It has now become clear that this technology, if we do not limit its use, will represent a significant step toward the creation of a surveillance society in the United States,” the ACLU said in a statement.

Police are split on how long the images should be archived, and what exactly should be done with them, but they tend to agree that they’re useful for catching criminals and even for preventing crime. As an example, the Post says automatic license plate recognition (ALPR) could be used at a nightclub to identify attendees, so if members of rival gangs happen to drive up, cops can initiate some pre-crime action and send cruisers to the scene before things get ugly.

What the Post article doesn’t address is how this technology could be used alongside other surveillance tech, such as aerial drones or GPS. In Australia, police officials have discussed pairing up speed camera devices, which also recognize license plates, with aerial surveillance networks to track cars of interest. In this country, GPS devices were before the U.S. Supreme Court earlier this month, which heard oral arguments regarding their surreptitious use by police without a warrant.

Database security is another open question. What happens if someone hacks into this archive and uses it to track a person’s private life? There may not be an expectation of privacy while using public streets, but that doesn’t mean someone’s life should be able to be pieced together based on where they drive.

Tom Wilkins, executive director of the D.C. police department’s intelligence fusion division, told the Post the technology was still emergent, and therefore so are the guidelines covering its use. “Even though it’s a tool we’ve had for five years, as it becomes more apparent and widely used and more relied upon, people will begin to scrutinize it,” he said.