How Dubuque Is Becoming The Smartest City In America

By providing its citizens with a steady stream of personalized, real-time data, the ninth-largest city in Iowa is changing the world 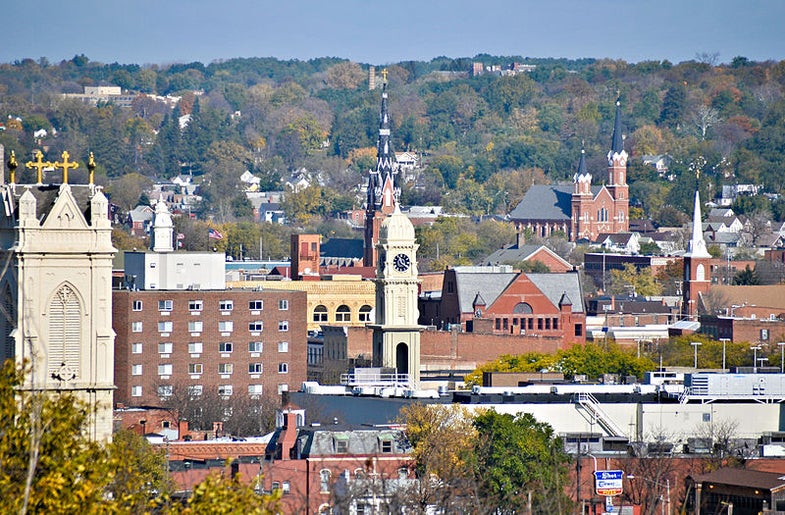 When Roy Buol stepped into the mayor’s office of the city of Dubuque in 2005, he did so with a handful of imperatives. There were the needs of his citizens, who throughout his campaign had voiced concerns on issues like public transit, green space, water quality, and recycling. There was the need to live up to his campaign message, which centered on engaging citizens as partners in the administration of the city. And then there were his private concerns about the larger world.

By 2006 Buol already had the city council on board to make sustainability a top priority for the city. But it was in 2009 that Dubuque–population 60,000, ninth-largest city in the nation’s 30th most populous state–began its transformation into one of the most important cities in America. That’s when the city launched a unique public/private partnership with IBM Research to recreate Dubuque as the nation’s first truly smart, sustainable city. For both Buol and IBM, that meant data–real-time data, and lots of it.

The overarching idea is that if you give citizens tools to find the inefficiencies in their lives, they’ll tighten the screws themselves.The partnership involves a series of pilot studies aimed at engaging and empowering citizens through information. The city has already completed a pilot program that replaced the water meters in 300 households with smart water meters that interface with IBM’s technology. One thousand more households have been fitted with smart electricity meters for a smarter electricity pilot that is currently underway. A 250-home smart natural gas metering program is also tabulating resource usage, feeding residents and the city real-time data about natural gas consumption. Then there’s the Smarter Travel initiative, in which 1,000 households have volunteered to let IBM and the city follow citizens movements via smartphone and RFID technology so city managers can determine how to make the flow of people throughout the city more efficient and less energy intensive.

These testbed technologies aren’t just about delivering information to city hall and IBM data servers, but delivering data directly to Dubuque’s citizens. Aside from the anonymized aggregated data IBM delivers to the city, the system gathers and delivers personalized data in real time to the households involved in the pilots via secure web portals. The overarching idea is that if you give citizens tools to find the inefficiencies in their lives, they’ll tighten the screws themselves.

“The plan is pretty simple: Give people what they need,” says David Lyons, project manager for Sustainable Dubuque, the larger umbrella initiative that includes the IBM Research partnership. “And they’ve defined that for us. They need information that is specific to their utilization of resources. Not just about how the community or the world uses resources, but ‘how do I use resources?'”

Thus far, it’s working. The results of Dubuque’s sustainability experiment are still quite preliminary–only the water pilot has actually competed a full trial–but already the initiative has produced tangible benefits, Lyons says. For one, Dubuque is learning how how to engage its citizens with data–“just because someone has access to the Internet in their home doesn’t mean they are comfortable inter-relating with data over the Web,” he says–but it’s also learning how to engage a city government with data.

“There are personal decision-making tools, but there are also policy-making tools,” Lyons says. “The data in aggregate comes to the city, and now the city can begin using it to do due diligence on investment and policy decisions: how long will it take for new water technology to pay for itself through new revenue or savings? What is the opportunity to avoid investment in something like a parking ramp through the use of increased transit opportunities?”

The smart water metering pilot is already producing hard results: an overall 6.6 percent reduction in the utilization of water that was at least partially driven by an eight-fold increase in the number of households that each–by looking at data–identified and fixed a leak.

In Dubuque, less water waste means less energy waste as well. Water production is the most energy-intensive activity the city engages in, Buol says, and it’s like that for pretty much every city. On top of that, more than a quarter of all clean water is lost as waste. If data can help individual citizens identify and fix leaks, then everyone benefits from reduced energy consumption. These kinds of relationships don’t live at the surface. But, Buol says, they do live in the data.

“It gives me very strong reason for hope,” Buol says. “I think this creates a very compelling model for other cities to replicate. It won’t be the City of Dubuque or IBM trying to sell what we’re doing: People will be able to see it and they’ll want the same benefits for their citizens and their businesses.”

Therein lies the whole idea of this collaboration. Dubuque isn’t special because it’s unique, Dubuque is special because it’s every city in America. There’s not a single piece of this technology that couldn’t be implemented in any other city in the country, Lyons says. Soon, Dubuque and IBM plan to scale their smart technologies–and the efficiencies they bring–city-wide (the water project is already exploding from just 300 households to 3,000 households and 1,000 small businesses). After it spreads across Dubuque, it could spread anywhere.

IBM has even developed a plug-and-play version of its analytics software called the Intelligent Operations Center that offers real-time analytics tools to cash-strapped municipalities that can’t yet afford to make investments in all of the hardware that will someday tie together the cities of the future.

Next year Dubuque will have the hard data from its electricity, transit, and natural gas pilots and it will further scale the projects to take in larger numbers of households and businesses. And if the project continues on its current trajectory, it will be difficult for other cities to ignore what’s going on there.

Which means Dubuque, Iowa, may soon be coming to a city near you.