Archive Gallery: Now You Can Watch Television in Color! 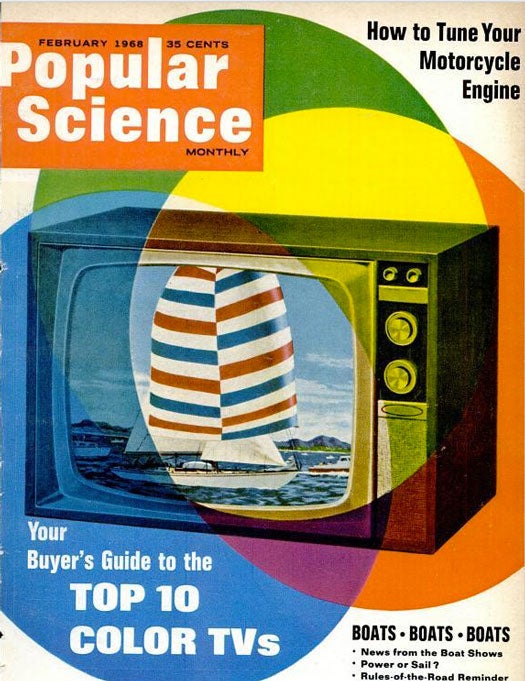 In the early 1950s, we grappled with a life-changing dilemma: to buy a color TV set, or not to buy a color TV set? In retrospect, the right answer seems obvious, but the hassle of switching systems in those days meant that viewing black and white images was more tolerable than shelling out the money needed to make the transition.

A brief history lesson for those of you unacquainted with that era: in October 1950, following years of squabbling between various corporations, the FCC finally authorized CBS’ system of color broadcasts as the national standard. Despite their successful campaign, CBS ran into a number of problems once they actually starting implementing their technology. Firstly, 10.5 million black and white TV sets had been purchased nationwide, and none of them could receive color programs. Since viewership was limited, advertisers were hesitant to sponsor programs that practically no one would see. The venture was doomed.

In spite of the system’s technical difficulties, we recognized that the color television was the future, and that we would be remiss in not hailing its potential. But could we in good conscience recommend purchasing color TV sets before the technology had time to mature? Color TV sets were expensive in the 1950s. In 1954, Westinghouse unveiled a set that cost just under $1300. Around eight years later, RCA manufactured a line that cost $500. This seemed like an awful lot of spending, especially if you’d already purchased a black and white set. But regardless of whether they could afford a color TV set, readers needed to know what they could expect from the technology once it replaced its predecessor.

Like our editors do today, we prepared our readers for the transition by testing out a few of these new-fangled color TV sets for ourselves. In 1962, our writer purchased the $500 RCA set, only to complain that setting it up was a little confusing. “The patient serviceman tried to explain to my wife what he was doing,” he said. “But she fled to the kitchen.”

All technical issues aside, seeing a program in color made the experience of watching television far more engaging than our writer could have imagined. “The sense of participation in color shows is heightened,” he wrote. “We become more absorbed in the stories; the dividing line between make-believe and the real thing is not so sharp.”

Sounds like the future to us — after all, nothing foreshadows a new era in technology like a budding addiction to your latest form of home entertainment.

Click through our gallery to read more about how we covered the introduction of color TV.