How a College Class Tracked Down Osama Bin Laden

Hunting the world's most wanted man for school credit 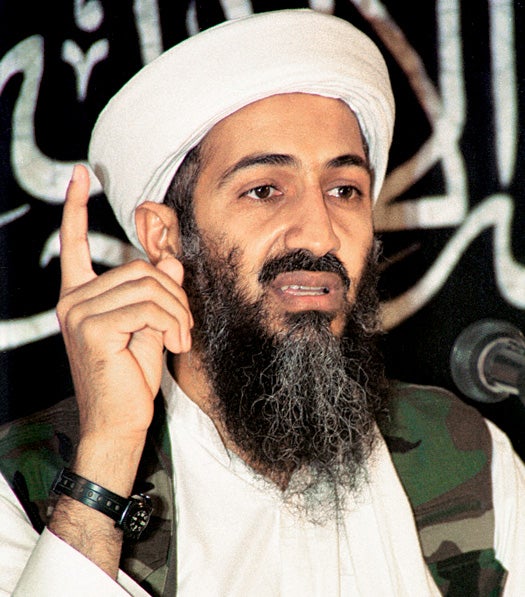 In 2008, students in Tom Gillespie’s geography class at the University of California at Los Angeles were floating ideas for class projects. One student wanted to calculate changes in the size of refugee camps in Sudan. Another figured he could gauge the effectiveness of the military surge in Iraq by looking at aerial images of Baghdad at night. To execute these projects, the students planned to employ the methodologies and systems Gillespie had been teaching them about, primarily geographic information systems (GIS), remote-sensing and GPS. These satellite-based tools made even the most challenging undertaking seem possible, so it wasn’t a complete surprise when someone (Gillespie can’t recall just who) posed the question: why not try to find Osama bin Laden? “There had been no scientific attempt to figure out where he was,” Gillespie says. “So I told the students, ‘Look, guys, if you take this seriously, I will.’ “

The fact that a class of undergraduates could entertain such a question reflects the radical transformation geography has undergone in the past decade. Since 2000, nearly as many Earth-observation satellites entered orbit as NASA had launched in all its previous years—some 73 in all. Much of the resulting high-resolution imagery has been made available to the public. And with the advent of GIS (a cartographic system designed to integrate geographic data and imagery software) and remote sensing (the use of aerial sensors such as radar, sonar and laser to detect and classify objects), scientists have been able to do everything from map village-level destruction in Darfur to help vineyard owners monitor the health and productivity of their vines. Gillespie, who studies endangered plants in Hawaii, has a project to predict the future distribution of the state flower, Hibiscus brackenridgei, based on climate change scenarios. “We’ve got all these satellites going up and all of this information now available,” he says. “Now it’s just a matter of what question do you want to ask in an intelligent way and then try to solve.” 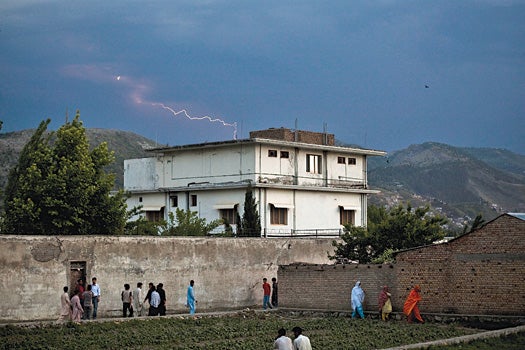 The students determined that the al Qaeda leader was most likely living in a city in northern Pakistan, in a compound similar to the one in which he was discovered (above).

To search for bin Laden, Gillespie’s students applied two theories for mapping and predicting the ranges of plants and animals. “Distance-decay” theory holds that as a given species ventures farther from a given location, the probability of finding the same density of the species nearby declines. The theory of “island biogeography” has it that animals move between large islands in close proximity more often, and so large islands support a greater variety of species than small, isolated ones. Bin laden was neither a ferret nor a hibiscus, but if the theories held for endangered species, perhaps they would work for a criminal mastermind on the lam. Had bin Laden traveled very far—to the more secular parts of Pakistan, say, or India—he would have found himself in a place with people of different religious and political beliefs, thus increasing his chances of being captured or killed (distance decay). And he stood a greater chance of being detected in small towns or isolated villages (island biogeography). Gillespie’s students deduced that the al Qaeda leader most likely settled in a sizeable city not far from his last known location, the Tora Bora cave complex in eastern Afghanistan.

If the theories held for endangered species, maybe they would work for a criminal mastermind on the lam.They then created distancedecay probability maps over satellite imagery and determined that there was an 86.6 percent chance that bin Laden resided in one of Pakistan’s seven federally administered tribal areas. Of these, Kurram, in which the class identified 26 “city islands,” was closest to Tora Bora, and its largest city is Parachinar. From a political standpoint, and just plain common sense, the city struck Gillespie as a good fit for the world’s most wanted terrorist. Parachinar had housed Mujahideen during the Soviet occupation of Afghanistan, and, more generally, the largely autonomous fatas have long sheltered militant Islamists.

Once they had a city in mind, the class homed in further by devising a list of bin Laden’s “life history characteristics”— his 6’4” frame, his need for electricity for his dialysis machine and his bodyguards. High-resolution images revealed Parachinar to have more suitably large compounds than the other cities, with three buildings matching the criteria exactly. “If one follows our approach,” Gillespie wrote in a paper subsequently published in MIT International Review, “one would predict that he is located in one of these three buildings.” 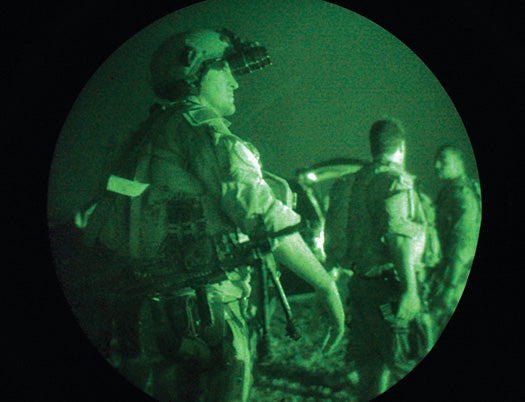 Bin Laden was discovered and killed during a U.S. Navy SEAL raid this past May (actual raid not pictured above).

When U.S. Navy SEALs stormed bin Laden’s residence last May, how well did Gillespie’s class-generated hypothesis hold up? They didn’t exactly nail it. Bin Laden’s last stand occurred some 278 miles east of Parachinar, in Abbottabad. still, Gillespie says that his students got a couple of key things right. “The fact that he was in a city was right on, and in a compound almost exactly as we described,” Gillespie says. “There had been all this talk about him living in caves. We showed that wasn’t the case.”

Geography students are in demand. not only are the military and intelligence services recruiting the kids in Gillespie’s class—”I get the guys in black suits coming to my office to do background checks on my students”—so are parks and recreation departments needing aerial-resource evaluations, city transit authorities desiring new bus routes, and banks wanting to determine the best spots for ATMs. Military officials have also requested sabbaticals at UCLA to learn more about remote sensing and biogeography. But all the attention hasn’t fazed Gillespie. “I’m too busy trying to save trees in Hawaii,” he says.

To locate the FBI’s most wanted man, geography professor Tom Gillespie and his students downloaded 3-D models of Tora Bora—bin Laden’s last known location—from NASA’s Landsat program and the Shuttle Radar Topography Mission. Next they applied species-movement theories to the images, giving them probable areas to search. To narrow the hunt, the class located the largest cities in the region. Then they purchased, for about $16, night imagery from the government’s Defense Meteorological Satellites. Tracing the glow of lights at night gives a good sense of population density. Finally, the class zoomed in on individual buildings that might house the al Qaeda leader, buying images from a commercial satellite for $1,000. “All the data is out there,” Gillespie says. “It’s just a matter of knowing where to look and how to go about using it.”

How It Works: Narrowing Down 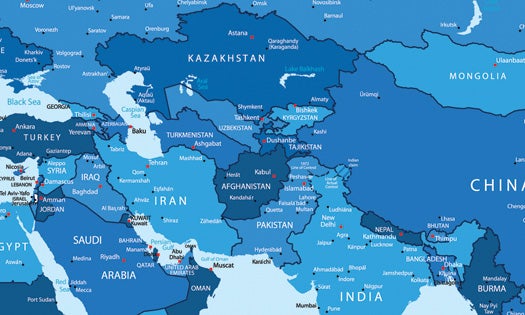 Beginning with bin Laden’s last known location in Tora Bora’s cave system, the students calculated that there was an 86.6 percent chance of the terrorist hiding in one of seven nearby tribal areas. 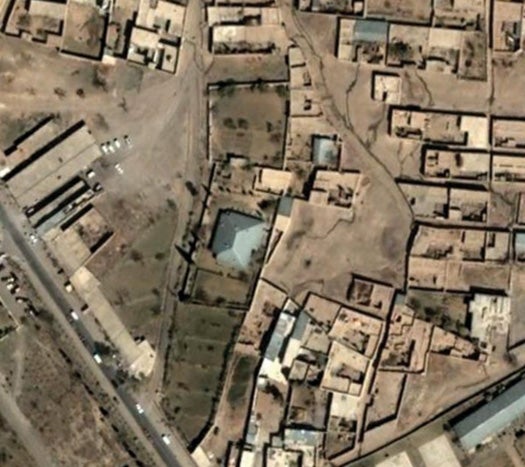 They then overlaid an exponential-decay chart radiating from Tora Bora: The farther from the caves, the slimmer the chance that bin Laden might be there. Using night-light imagery to assess urban areas, the class located all the cities that were a short distance from where bin Laden was last seen. 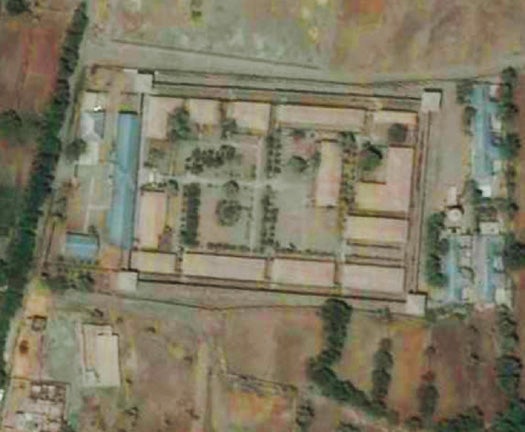 The class used QuickBird imagery of the target cities. The QuickBird is a commercial satellite that sells submeter (accurate to within less than a meter) images of earth. Then they scanned for structures that could house bin Laden based on characteristics, including his height, health and retinue (his multiple bodyguards). 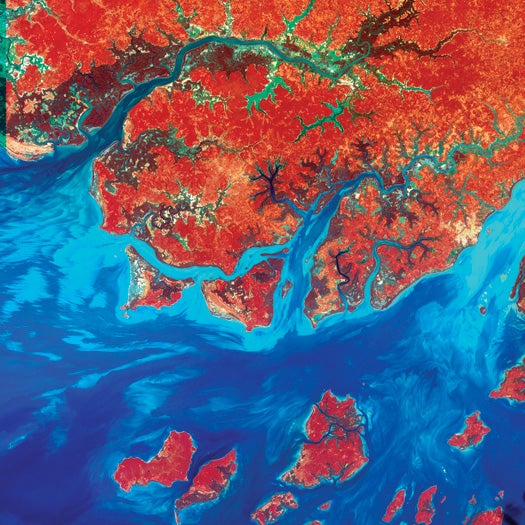 NASA’s Enhanced Thematic Mapper Plus measures the reflection of solar radiation from Earth to produce landuse information in real time, 3.8 gigabytes’ worth for each 114-by-106-mile area (pictured above: Papua New Guinea). On February 11, 2000, the space shuttle Endeavour launched. Two synthetic-aperture radars were on board. Throughout the 11-day mission, the radars collected highresolution digital topographic data for 80 percent of the Earth, accurate to within centimeters (pictured above: Kamchatka peninsula). 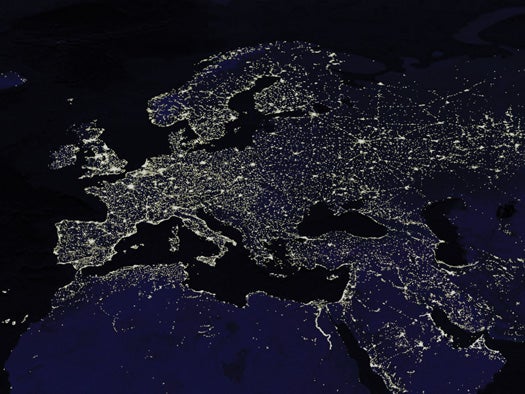 Four satellites launched by the U.S. Department of Defense and run by the Air Force use visible and infrared light to collect images of atmospheric conditions (pictured above: Europe at night).