Too much gadget and not enough battery. It’s a problem any early adopter of a smartphone has faced (and, to... 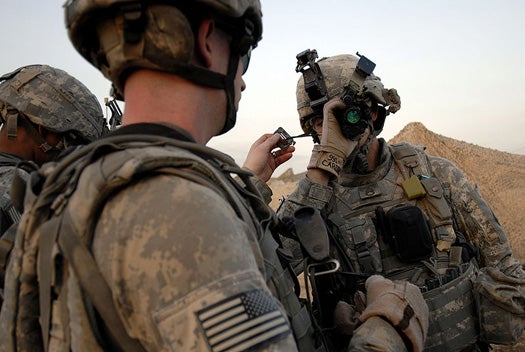 Too much gadget and not enough battery. It’s a problem any early adopter of a smartphone has faced (and, to some degree, is still facing) and can be a particular hassle when you’re traveling. Lots of gadgets means lots of charging cords or spare batteries. So imagine what it’s like for the average soldier who is routinely on the go and increasingly weighed down with gadgetry and power sources. It’s no wonder, then, that DARPA announced yesterday that it wants to deploy wireless charging hubs in the battlefield.

Specifically, DARPA wants a way for troops to be able to charge up their various gadgets–GPS units, voice and data comms, illumination devices, you name it–from a single, physically separated source that can charge several devices simultaneously. Spare batteries are simply too heavy (DARPA estimates troops lug five to ten pounds of battery weight around already) and the technology burden is only increasing as grunts grow more and more wired.

So at the very least, DARPA wants to lose the power cords and consolidate that battery weight to a single source. Says the agency:

One possible implementation of the system is to have a high-energy fuel cell or rechargeable battery mounted to the pack or vest and to have the power produced by that centralized energy source wirelessly transmitted to the various electronics equipment the Warfighter carries such as: vest mounted radios, handheld GPS units, and rifle mounted night-vision scopes. This wireless power distribution hub concept allows the power source to be physically separated from the multitude of portable electronics carried during a mission, and reduces the logistical burden associated with fielding multiple battery types for each individual piece of electronics equipment.

Presumably such a system would require all of a soldier’s regular gadgetry to be outfitted with battery packs that can receive a wireless charge. That could be expensive, but worth it in the long run. Vehicles could also be rigged up with fuel-cell (or some other technology) driven wireless charge stations so soldiers would always be automatically topping up their devices anytime they are mounted or even dismounted within a few yards of their vehicles. That’s one less thing for the soldier to worry about, and one more way to ensure each warrior maintains battle readiness.