Or, perhaps more accurately: Dear Congress: please fund NASA sufficiently. After witnessing first-hand the extraordinary act of putting humans into space this Friday, I've realized that the importance of our manned exploration of space transcends budgets and politics 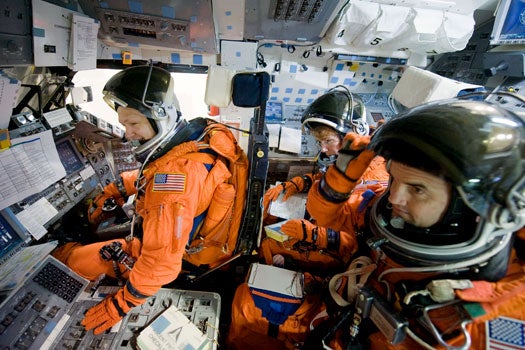 Just like Rebecca, I’m sitting here drinking out of a space shuttle mug. Mine, with the STS-135 mission seal, I bought from the Kennedy Space Center souvenir stand on Friday, a few hours before Atlantis took to the skies. I certainly won’t need it to remember my first (and last) shuttle launch–something that’s been thoroughly seared into my memory–but it will be a nice, frequent reminder of the incredible feelings of that day.

It’s been tough to articulate those feelings–where they came from, and why. But I think I’ve managed to trace them back to a single source: the four astronauts inside Atlantis.

As of today, the United States no longer has the capacity to put humans into space. Three decades of doing it several times a year are over. So what now?

Part of that answer is an ambitious program of unmanned missions beginning this year. But having witnessed space flight from an entirely different perspective this weekend, I’m hooked on humans in space. NASA needs to regain the capacity to fly astronauts into orbit and beyond as soon as possible.

I surprised myself by becoming so emotional as Atlantis faded out of sight beyond the cloud ceiling. And I wasn’t alone, judging by the eye-drying and spontaneous hugs I saw around me at the KSC press site–everyone was similarly buzzed. It doesn’t get much more dramatic than a rocket launch, as far as what we humans are capable of here on Earth. The tension of the countdown, the loud and fiery release–it’s indescribable.

But then your brain chokes on an amazing fact: there are four people inside that shuttle experiencing all this excitement and tension on a completely different level, one of unfathomable magnitude relative to where you stand on terra firma. Your heart pours out to them, imagining them three miles away, strapped in, prepared to do something extraordinary. If I’m this worked up as a spectator, I thought, imagine the feelings inside the heads of the astronauts.

And these are government employees. They’re not millionaires. Not to disparage space tourists; if I had the money, I would be spending it on putting myself into orbit, no question. But does the public cry or hug en masse when Charles Simonyi blasts off from Baikonur in a Soyuz rocket? Do crowds gather? This question is in no way indicative of any fault in Mr. Simonyi’s character or motivation. I stood behind him while we were waiting to get our launch credentials; he seemed like a perfectly nice gentleman. But the reason an estimated one million people packed up their cars and RVs to drive to the Space Coast for a space shuttle launch is because it is put on by the people. Everyone who made that launch possible–in the truest definition of a government employee, they’re our representatives in this incredible project. We don’t just associate ourselves with them, we live through them. That means something. They’ve devoted their life to this very civil, very scientific cause–the exploration of outer space. 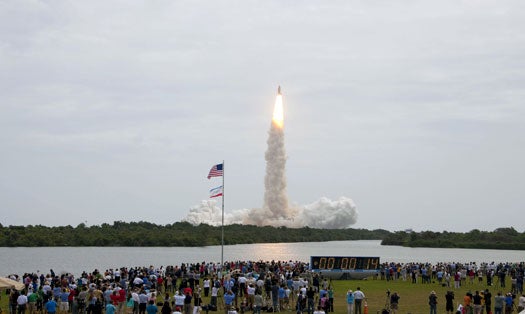 More than anything else it’s the humans who made me tear up. Humans are what made us all feel that spontaneous joy next to the big clock in that field. Humans are what elicited a loud cheer in NASA’s Tweetup tent accompanying main-engine cutoff–the point in the mission where a safe orbit is assured. Humans are what made me well up again when my phone buzzed with messages in my pocket, knowing my own friends and loved ones were on the other end, wanting to share in what I had just experienced.

This is not to say, though, that canceling the shuttle program was a bad decision. After three decades of service, all in low-earth orbit, NASA has wisely elected to utilize cheaper launch systems, both foreign and private, for the laborious duty of ferrying supplies and eventually astronauts to and from the ISS, which has become the shuttle’s primary mission.

What’s troubling is the uncertain future for the type of American manned spaceflight that pushes the boundaries of exploration forward. It could be argued that the shuttle itself failed on that goal. But despite its compromised scope, the world’s first reusable space plane became an iconic figure in the American space program, perhaps for no other reason than it carried more humans into space than any other launch system in history.

The two leading candidates to replace the shuttle currently demonstrate how interesting a time this is for space exploration. SpaceX, a private company, will almost certainly have the capability to put a human into low-earth orbit with its Falcon 9 rocket and Dragon capsule before NASA itself does. SpaceX is also racing to develop a much bigger rocket, Falcon Heavy, with the ability to haul more cargo and/or reach deep space.

NASA’s own plans, recently in flux after the cancellation of the moon-bound Constellation program, have solidified around the Space Launch System (SLS), a heavy-lift rocket based on the shuttle’s main engines and solid rocket boosters, and the Multi-Purpose Crew Vehicle (MPCV), a two- to four-person crew capsule developed by Lockheed Martin based on its Orion concept. Both are essentially the same systems outlined in the Constellation plan, but with reconfigured mission goals of reaching an asteroid and eventually venturing to Mars, rather than again landing on the moon.

Speaking to CNN over the weekend, NASA Administrator Charles Bolden reaffirmed the Obama administration’s timeline for the two missions: reaching an asteroid by 2025, and achieving Martian orbit “with the intent of landing” sometime in the 2030s. But in a time of severe deficit crisis, ambitious NASA programs like these are of course subject to appropriations. The recent cancellation threat of the behind-schedule but critically important James Webb telescope should be indicative of the budgetary struggles NASA is up against.

I believe, though, that It is absolutely critical, even in these fiscally constrained times, to push relentlessly forward with manned space exploration. Now that the shuttle program is gone, I think we’ll begin to realize something even more profoundly in its absence: That the most important thing we can put into space is ourselves.