On a rainy weekend last year, Patrick Priebe, a German lab technician and Iron Man fanatic who rewatches the film... 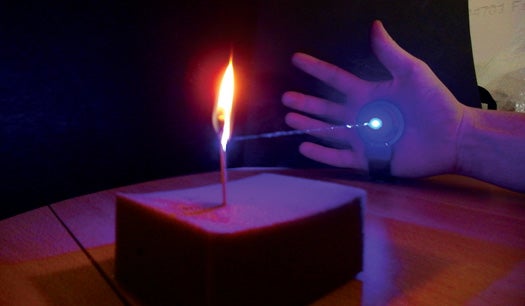 On a rainy weekend last year, Patrick Priebe, a German lab technician and Iron Man fanatic who rewatches the film and its sequel every week, decided to build a compact yet powerful laser inspired by Tony Stark’s repulsor-beam weapon. In the U.S., the maximum strength for consumer laser pointers is typically five milliwatts; Priebe’s handheld laser is 1,000 milliwatts, enough to instantly blind anyone not wearing special safety glasses.

Priebe began his project by sculpting a two-millimeter sheet of brass into a C-shape so that he would be able to slip the weapon onto his hand. Inside the housing, he made a large ring that holds a laser diode from a Casio projector and works as a heat sink. The device runs on 7.4 volts from lithium-ion batteries, which a component called a driver keeps from spiking dangerously and damaging the diode.

Finally, Priebe, who spends his workdays refining paint and polymers, painstakingly applied the primer, filler, base coat and matte to give it a striking look. Although his beam can’t blow guerrilla soldiers off their feet like his comic-book hero’s could, it can easily scorch balloons, wood, a CD case or a piece of raw chicken.