Here at PopSci, we’ve been fascinated by Boston Dynamics’ Big Dog ever since it was an adorable robotic puppy that... 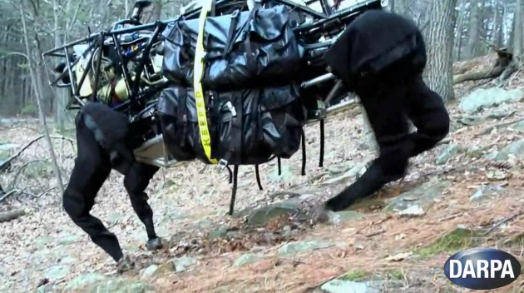 Here at PopSci, we’ve been fascinated by Boston Dynamics’ Big Dog ever since it was an adorable robotic puppy that couldn’t even open its eyes. Now that the technology is all grown up, repackaged, and rechristened the Legged Squad Support System (or LS3), its eyes are very much open–and fixed firmly on the soldier in front of it. The new LS3 prototype has just undergone its first outdoor exercise, demonstrating the ability to “see” its surroundings and distinguish between objects and humans.

Over the next year-and-a-half, DARPA plans to prove out LS3’s technology and get it ready to support warfighters in the field. Its main battlefield role will be little more than that of a robotic pack mule, carrying hundreds of pounds of gear so that dismounted Marines and soldiers won’t have to. These days, a lot of that weight is batteries, and here LS3 provides a two-fer: Not only can it carry troops’ various batteries and battery powered handheld devices, but it also serves as a mobile power source that can recharge them on the move.

The idea here is to create an animal analog–something that can haul lots of gear over rough terrain and interact with personnel naturally, in a way that is intuitive to the soldiers and Marines around it. In addition to its “eyes,” DARPA wants to give it auditory sensors that can respond to simple voice commands like “come” or “stay.” And ongoing tests aim to refine the vision system so it can distinguish between humans and learn to track specific individuals.

At the end of the 18-month proving period, LS3 will embed with Marines conducting field exercises to see how it gets along in real maneuvers. Here’s hoping those Marines don’t require the element of surprise. As you can see below, LS3 can see and move better than ever, but it is still very, very loud.