How Toys Are Preparing Kids For A Future With Robotic Friends 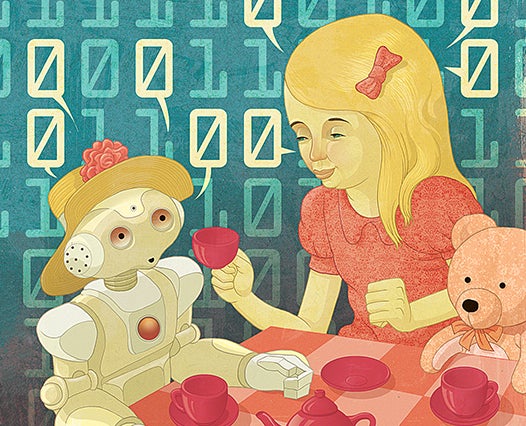 For Christmas in 1993, my father gave me a My Magic Diary, a children’s version of Casio’s digital organizer. From that point on, I always had some iteration of that device—whether a PalmPilot or the iPhone 5 I carry today. Like most others my age, I was raised around mobile devices, so now as an adult, I’m generally unfazed by a new phone or tablet or piece of software. The next generation, Generation Z, will be raised with something entirely different. That thing will be robots.

Just as I had my little digital organizer, children today are growing up in a world where people touch and talk to their gadgets. Whether it’s on their mother’s iPad or a kid-friendly LeapPad tablet (a touchscreen device that plays interactive educational games), children are learning to interact with devices in new ways. “With touchscreens, there’s an intuitive interaction with what they’re craving,” says Jody Sherman LeVos, a child-development expert at LeapFrog. And that interaction is not limited to touch. Speech- and facial-recognition software lets kids talk to gadgets—and lets the gadgets talk back.

Kids’ perception of technology is different. Devices can be friends or teachers, not just tools.Because children are accustomed to this social relationship, their perception of technology and its purpose differs from those of their parents. Devices can be friends or teachers, not just tools or entertainment. Last year, a team at Boston-based research firm Latitude asked children to imagine how robots could fit into their lives. Sixty-four percent imagined a social humanoid, and the bots were more likely to act as tutors, playmates, or companions than exclusively as maids or assistants.

Members of Generation Z will also be the first to have advanced robot companions at home. Last fall, Hasbro released a new generation of Furby that gathers data from sensors—including an accelerometer that measures how gentle or rough a child is with the toy—and changes its personality based on how it’s treated.Several more robots launching this year, including Romo and WowWee RoboMe, use a smartphone as a computing brain, so they’re able to utilize the camera and facial recognition to react to people. (The toy market has been a proving ground for innovative technologies before; the Speak & Spell, for one, was the first device with a single-chip voice synthesizer when Texas Instruments launched it in 1978.)

A generation of children raised with robots could power a new wave of innovation. Just like software development, which moved from labs to start-ups to anyone with even a passing interest in code, robotics development will become democratized. Current robotic platforms, such as the Robot Operating System developed at Willow Garage in Menlo Park, California, are open. Like a smartphone SDK, the OS turns robots into a canvas for a developer to create applications. In the same way kids as young as 12 are creating mobile apps today, they will create robot apps tomorrow. Need a trainer? A Spanish tutor? A friendly ear? Just download an app, and it’s literally there.