Meet Robbox, the robot that schleps a half-ton of supplies for special forces

The machine is one possible way for commandos, burdened down by gear, to get a helping hand. 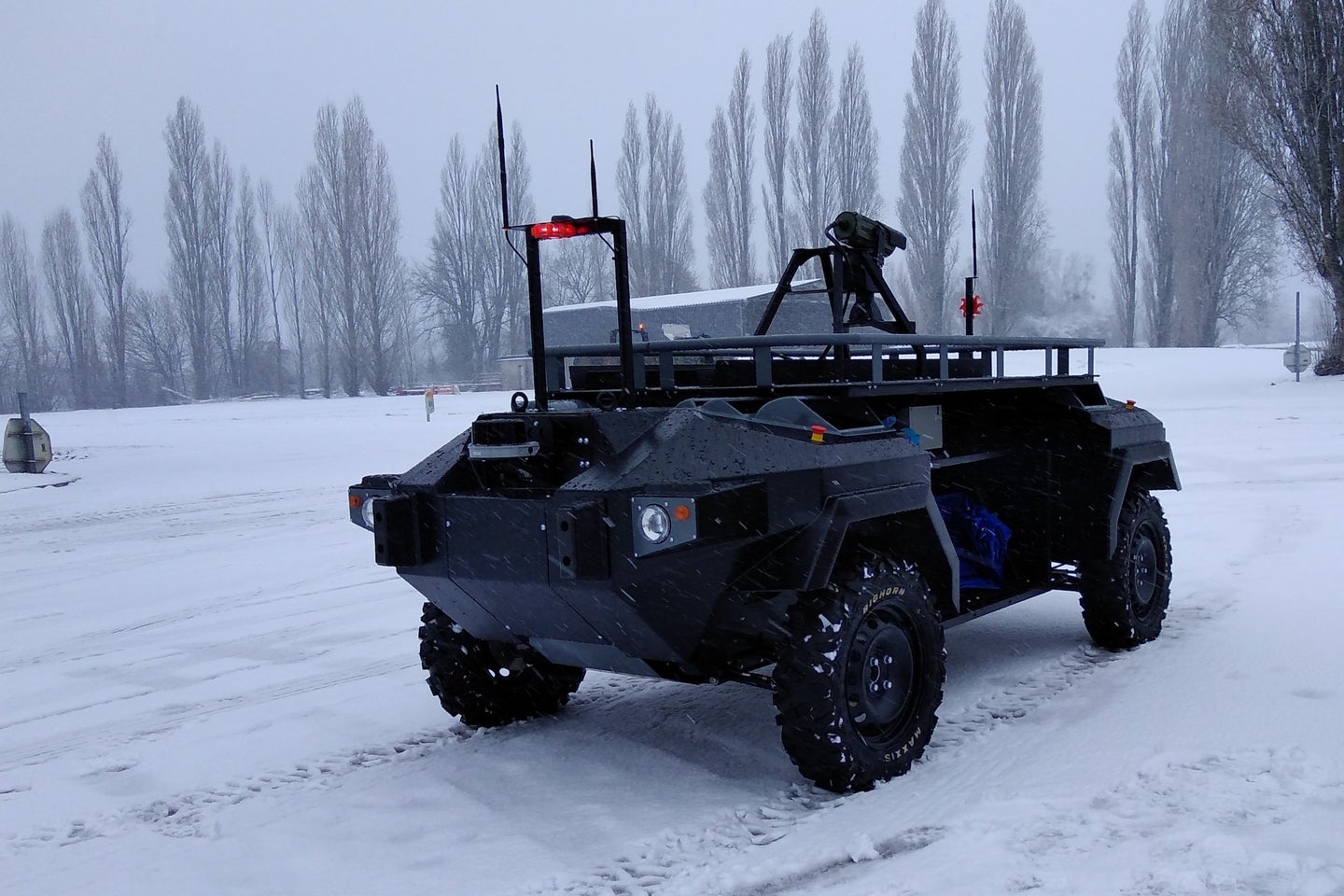 If you’ve ever seen a member of the special forces kitted out for a mission, you might have been astonished at how much they were expected to carry on their person: 132 to 154 pounds is about average for French teams, for example. Their packs contain not only their nourishment for several days and, of course, their weapons, but also all the other equipment they might need: cameras, drones, microphones, breaching gear and all sorts of other bits and pieces that even James Bond might have a hard time identifying. Imagine how much their agility and overall effectiveness would improve if they didn’t have to carry these huge loads—if they had a robotic mule to do it for them?

The idea behind Robbox was to lighten the load for special forces, but “it had to be a solution, not an extra thing for them to worry about,” Beaussant says. So the technology needed to be kept simple. “Lessons learned with the two prototypes designed over the past seven years show that if the technology is too complex, then the reliability is compromised.”

The Robbox vehicle looks like a 1,500 lb 4×4 wheeled jeep without a roof. It’s about 5 ft wide, 11 ft long, and can carry 1,100 lbs of mission modules. These modules can be integrated on the roughly 8 ft by 4 ft platform and in the approximately 5 ft x 4 ft x 2 ft space underneath the platform between the wheels. Its task is to carry cargo in different forms. The flat platform can also be equipped with a stretcher to rapidly evacuate a wounded soldier, making it similar in concept to this robot the US Marines have been testing.

The vehicle’s diesel engine allows it to drive around at a top speed of 50 mph for 186 miles on paved roads (19 mph cross-country) while the 15kW electric engine that feeds Li-ion batteries allows it to drive 50 miles in silence. “The weakness of existing systems is their [lack of] autonomy,” Beaussant remarks. He wanted a robot that didn’t need frequent refueling. So Robbox has enough fuel to keep the diesel engine running for 24 hours. “This means that with average use of three or four hours a day, it is self-sufficient for up to a week,” he says. “[Robbox] provides 50Kw of electric power so can be used by the operatives not only to charge their electronic devices but also to power their equipment.”

But Robbox only needs to use its own engines once the mission is underway. To reach the mission hotspot, “Robbox has the unique capacity amongst its competitors of being towable, just like a trailer, at up to 50 mph, all day if necessary, then automatically unhook so that nobody needs to risk getting out of the towing vehicle,” Beaussant explains. Robbox can also be transported inside aircraft or large helicopters or be air-lifted by the medium-sized NH90 helicopter used by 10 European nations, New Zealand, Oman, and Qatar.

So when it has reached the hotspot, its fuel capacity is totally dedicated to the mission “and given its payload capacity it can also carry extra fuel tanks if necessary,” Beaussant adds.

The robotic mule can either be piloted from a distance or follow waypoints. It is also being taught to follow a road or a person.

Romain Le Berre, sales director at Nexter Robotics, the company developing the command and control systems for Robbox (and others), tells Popular Science that the robot has some image-recognition abilities, thanks to machine learning. “For the moment it can recognize the difference between an adult and a child but not between a man and a woman or a person carrying a gun and a person carrying a spade, but that will come in time,” he says. (The idea here is that Robbox will be able to electronically report back to its operator that “there is a man on my route and he is carrying a gun.” The operator will then decide what to do with that information, not Robbox.) Le Berre explains that it could follow the edge of a road, for example, “but if the road has been damaged by a shell, that might confuse it.”

In addition to the minimum of six cameras Robbox needs to “see,” it also has LiDAR that emits pulsed light waves around the vehicle. These pulses bounce off surrounding objects and return to the sensor and by measuring the time it takes for each pulse to return, the sensor calculates the distance to the object. This is repeated millions of times per second to create a real-time 3D image of the environment around the vehicle.

Sera Ingénierie is currently working on the final details of the third version of Robbox which Beaussant hopes will be ready by June 2022 for Eurosatory, the major European land and air-land show in Paris. And he also hopes to be able to submit it in answer to an expected call for tender by the French Army for route-clearing robots. But meanwhile the second version will be evaluated in September by the French Army’s equipment test center, the STAT (Section Technique de l’Armée de Terre), for use as a perimeter guard to do rounds instead of a human with a dog.